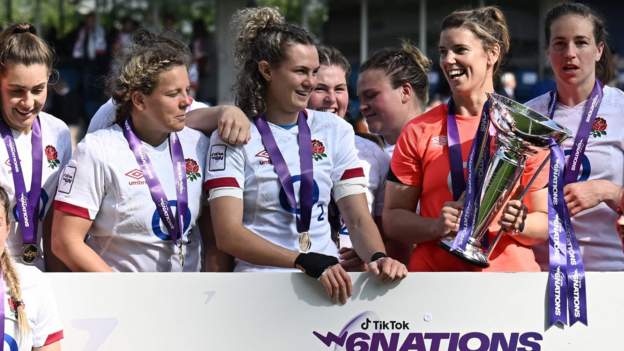 In any other year a fourth consecutive Six Nations title, a Grand Slam and a record-equalling winning run might be a moment to stop and reflect.

But in 2022, England will not slow down as they seek something even greater - a World Cup win.

The Red Roses claimed their 23rd win in a row in front of a ferocious Bayonne crowd on Saturday.

It equals England's best-ever run, set from 1992-97, and completes their dominance at the top of the world game.

They claimed two record wins against the Black Ferns last autumn and have now beaten France 10 times in a row.

At the moment, it looks like nobody will be able to touch them when October's World Cup in New Zealand comes around.

Although the squad is ready to celebrate their Grand Slam win, captain Sarah Hunter was clear when she spoke on BBC Two after the match.

"Our journey hasn't finished yet," she said.

"There's something special happening, but we can't rest on our laurels and still need to go that extra mile for the World Cup."

England initially looked rattled in the south of France as Romane Menager scored an early try for the hosts.

But the Red Roses' rolling maul came good and Sarah Bern was soon over for her first of her two tries, with England eventually pulling away to win 24-12.

The result means England have still not lost a game since a Black Ferns defeat in July 2019, and are unbeaten in the Six Nations since 2018.

But Bern says the World Cup is "always at the back of everyone's mind".

"When you get to the World Cup it's brilliant to have those records, but at the end of the day you have got to win the World Cup," she adds.

England's victory is all the more impressive considering the setting. A hostile French crowd deplored every penalty conceded and booed England right from the warm-up.

Retired World Cup-winning captain Katy Daley-Mclean says victory under such circumstances will give England "the mental edge" over France at the showpiece tournament.

The teams will face each other in the pools and may well meet again in the knockout stages.

Emily Scarratt - England captain for the day because Hunter was injured - says the win was "really important, especially away from home with a tough crowd and tough opposition".

It was by far the greatest test Simon Middleton's side faced all tournament given they won all their previous games - against partly professional or amateur opponents - by 50 points or more.

"We wanted to find out how resilient this side is and whether it can stand up to the utmost pressure," he said.

"The resilience we showed was incredible."

'New Zealand and France will turn up'

There are still five months to go until the World Cup - perhaps enough time for New Zealand and France to turn things around.

England will return to their clubs for the conclusion of the Premier 15s season before taking up international training again in July for a series of warm-up fixtures in September.

New Zealand have already announced an impressive set of preparation games and an even more eye-catching new coaching set-up.

The Black Ferns are attempting to rise from the ashes of a damning culture review which led to the resignation of head coach Glenn Moore.

Just as New Zealand have stepped things up since heavy defeats by England, France too could come out swinging.

"To sit here and say we've got this in the bag would be stupid," Bern said of the World Cup.

"New Zealand have got some brilliant coaches coming in. France we know will always come back for the fight.

"Everyone will turn up for the World Cup. We need to make sure we're there and as turned up as everyone else."

Fully professional for almost three years, England are unlikely to stray from their path towards World Cup glory.

But in the aftermath of another dominant Six Nations campaign, Middleton will allow his players a very short stop en route.

When asked what is next for England after their victory, he jokes: "We've got a real clear idea about the next 10 hours."

• England have won the past four Women's Six Nations, with their last defeat in the tournament being an 18-17 loss in France in 2018

• Their 2022 Grand Slam success was their fourth in six years

• England have won their past 10 matches against France