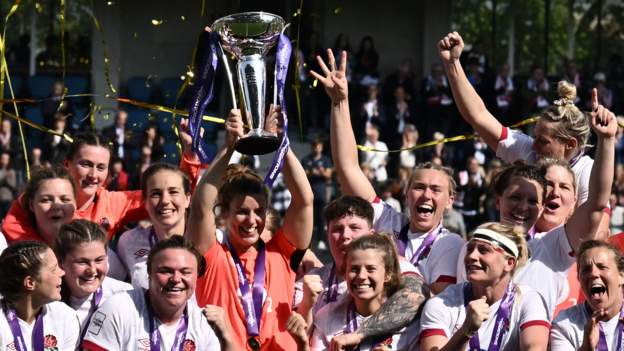 England proved their total dominance of the world game as they won a fourth consecutive Women's Six Nations title with a Grand Slam victory in France.

But their maul was a formidable weapon with two Sarah Bern and one Abbie Ward tries for a 21-7 lead at half-time.

Annaelle Deshayes' 66th-minute try gave the vocal fans hope, before England held on for their 23rd win in a row.

That run equals England's best - set between 1992-97 - and they have now won 10 consecutive games against France, who will be their World Cup pool opponents in October.

After record wins against the Black Ferns in the autumn, this victory places England as firm favourites for the showpiece in New Zealand.

England regroup as atmosphere boils over

The French newspapers on Saturday morning promised things would boil over in Bayonne and even during the warm-up the atmosphere at Stade Jean Dauger - sold out more than a month before the game - did not disappoint.

The chants of 'Allez Les Bleues' started early as the crowd cheered France's arrival and booed England before they headed back down the tunnel.

During the week, England had stated their intention to silence the crowd. That message evidently did not reach the resident brass band and when Zoe Harrison dropped a high ball behind her tryline there was an eruption of noise as the knock-on gave France a 5m scrum.

Number eight Menager sniped through a gap for the inevitable score to put England behind - something they had not yet experienced this tournament.

For the first time since 2021's Six Nations final against France, England were rattled. The Red Roses' superstars settled their nerves as Poppy Cleall made a solid carry and Helena Rowland followed it up with a stylish 50:22 kick.

England had struggled up front against France last year but now the rolling maul - shaped by forwards coach Louis Deacon - is their brightest star of all.

France offered defiant resistance initially but the pack of white shirts eventually rumbled over the tryline for Bern's first score.

The second try was a mirror image shortly after as Harrison kicked to the other corner and Ward went over in the maul.

The professional Red Roses are accustomed to keeping hold of momentum once they earn it, but France would never allow that on their own soil.

England wing Lydia Thompson dropped a high ball into touch and intensity grew as the crowd clapped to the beat of a drum before world player of the year Zoe Aldcroft stole the line-out to take all the tension out of the air.

Thompson swiftly made amends with an incredible run that got England back into France's 22, and a penalty kicked to the corner meant their maul got the job done again as Bern claimed a second.

French pressure soon mounted again as the blue maul bit back, but stopped short as England came dangerously close to a yellow card and a penalty try before Infante pounced on a loose ball and Harrison cleared their lines.

The relief did not last long and England's defence scrambled until eventually the clock went red and they took the chance to regroup at half-time.

England spoke before the match of their excitement at testing themselves after winning their other four games by 50 points or more.

But a 10th win in a row may show they finally have the upper hand over France, unless the French union decides to invest as heavily in their side as England's Rugby Football Union has done.

Les Bleues will now fall to fourth in the world rankings as Canada - beaten 51-12 by number ones England in November - take third spot.

There is still time for France to regroup before October's World Cup, with several short second-half revivals a promising sign.

The Bayonne crowd were soon voicing their indignation in the second half as Harrison was immediately shown yellow for a deliberate knock-on.

But England ended the French attack once again as they won a scrum penalty and managed to survive the 10 minutes down to 14 players without conceding.

No sooner had Harrison returned to the field than France centre Maelle Filopon was sent to the sin-bin for the same offence.

Captain Emily Scarratt successfully kicked a resulting penalty to maintain a 100% record from the tee, adding to her three earlier conversions.

France would not remain down as replacement wing Emilie Boulard made an impressive break, scything through defenders and into England's 22 before Scarratt galloped across the field to bring her to the floor.

France were actually improved by their numerical disadvantage and finally managed to put their own maul to work, leading to Deshayes' score off a scrum.

But the hosts could not give their fans what they wanted. Eventually the clock went red, Scarratt kicked the ball into touch and pumped her fist before scrum-half Natasha Hunt jumped into her arms in celebration.

The crowd may not have been behind them but England remained on the pitch and created their own atmosphere, forcing each member of the coaching staff to dance with the trophy on their head. A just reward for another stellar performance.

Player of the match - Helena Rowland