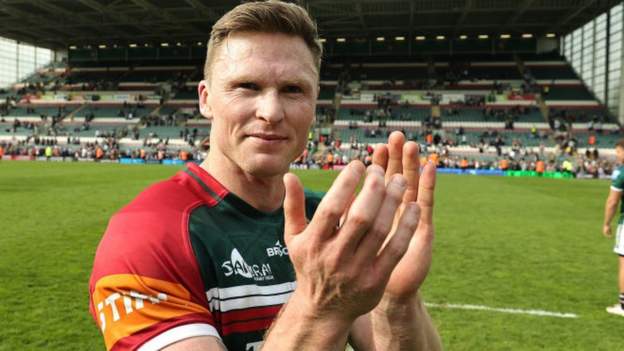 Ben Youngs also crossed, while Jack Bates and Toby Fricker replied as the hosts built a 27-12 lead at half-time.

The win maintained Leicester's four-point lead over Saracens at the top of the Premiership, but more importantly guaranteed them a top-two finish and a home semi-final in the play-offs.

Former Tigers, England and British & Irish Lions hooker Tom Youngs led the sides onto the pitch after announcing his retirement this week and there was an end-of-season feel about the rugby in a free-flowing sun-baked first half.

The Tigers, who have won 11 home games this season, were up and running inside five minutes when Ashton chased Moroni's kick down the wing and regathered to score his history-making 93rd Premiership try.

Ford's penalty made it 8-0 but Bears responded immediately following a scrum in their own half, as Bates outpaced the Leicester fly-half with a blistering finish.

But 35-year-old Ashton was in vintage form, crossing after a terrific team move and then finishing a breakaway try, to take a second record away from Varndell for the fastest-ever Tigers hat-trick.

Bristol again hit back when Fricker crashed over from close range, but Ben Youngs crossed for his first Tigers try of the season to give Steve Borthwick's side their bonus point after 35 minutes.

Tommy Reffell charged down a clearance kick to give Moroni a simple finish straight after the restart and Steward danced over for his eighth try of the campaign to take the hosts past 40 points.

Still there was no let-up in the frenetic action as Wiese crashed over after Ashton's burst was stopped just short, and Tigers old boy Thacker finished off a spell of Bears pressure.

Potter ran the length of the pitch to grab Tigers' eighth try but there was still time for Bristol to earn a bonus point through Vui as the sides racked up a combined 82 points on a balmy afternoon.

Next up for double-chasing Leicester is a home quarter-final with Irish side Leinster in the European Champions Cup in a week's time.

"My mum said to me the other day it's [try scoring] the only thing that makes me look genuinely happy, I enjoy them all and especially today.

"I'm glad to get it [breaking the record] out of the way. It could have taken a lot longer. I'm very grateful to the players for helping me get it out of the way quickly today."

"We are really pleased with the result and the way we started the game and how we found a way to pressure the opposition.

"There's plenty to improve on, particularly in that second half. We gave them too much space and looking ahead to next week we will need to be better than that.

"We all know what a quality player Chris [Ashton] is. I played alongside him many years ago and you can't tell very much difference in him. He is competitive, fit and trains as hard as anybody."

"The score doesn't reflect the effort a lot of our boys put in.

"Unfortunately, what it reflected was the silly, stupid turnovers that we gave - that's sort of the story of our season, that someone makes a mistake and then the boys have to work hard to cover it up.

"I'm proud of the effort, but certainly there were some poor mistakes from some individuals.

"Leicester are the gold standard at the moment. This is their time. They're doing well, and fair play to them."