Women's Six Nations 2022: What England must do to stay ahead for World Cup 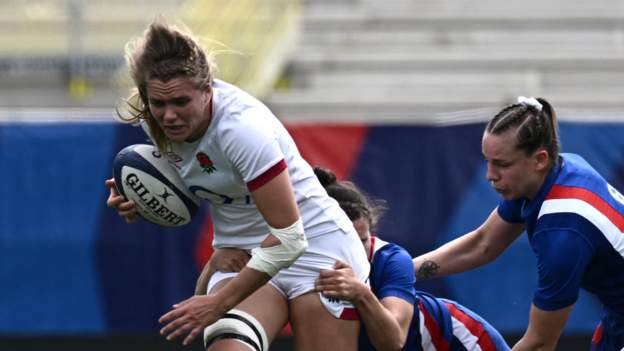 It did not take long for the review to begin.

The Red Roses faltered for only a few minutes against their hosts before powering ahead to a fourth Six Nations title in a row, further cementing their place at the top of the world rankings.

Despite such dominance, Hunter's desire to keep improving is shared by the whole squad.

France and hosts New Zealand are primed to bounce back at October's World Cup, so what must England do to stay ahead?

In the 2021 Six Nations final, France's forwards dominated and England could only grind out a 10-6 victory.

Since then, former Leicester and England lock Louis Deacon has joined as forwards coach and helped to turn things around.

The impact was evident as the Red Roses' rolling maul was responsible for all three of the tries that helped them to a 24-12 victory on Saturday.

England players will now return to their clubs for the conclusion of the Premier 15s season before gathering again in July to prepare for warm-up fixtures ahead of October's World Cup.

With the set-piece seemingly sorted, how to create more space for England's wings to get on the ball may be the next item on the agenda when they regather.

Head coach Simon Middleton has depth in almost every position but he is still experimenting with his starting full-back.

Abby Dow passed the test before breaking her leg against Wales - an injury that could keep her out of the World Cup - and Helena Rowland is the latest to step in.

Rowland is usually a fly-half and centre but showed devastating counter-attack at 15 in England's last two Six Nations games.

Middleton wants to see the rest of his back three shine, with Jess Breach and Lydia Thompson kept relatively quiet in Bayonne.

"We probably didn't free ourselves up to play as much," he said.

"We need to find a way to free the girls up to feel like they can play a bit more. We've got some fantastic players who didn't get on the ball."

England's next game will offer a chance at immortality.

They could claim their 24th win in a row, which would be a record for any top tier side.

The Red Roses have not lost since July 2019 and have been particularly dominant in this year's Six Nations.

The France game was the only one they won by fewer than 50 points and their eventual tally of 282 across five games is a record for points scored in a single Women's Six Nations.

The challenge now will be to maintain their stranglehold on the game until the World Cup final on 12 November.

"The scary thing is we don't even think we've played that well this tournament," scrum-half Natasha Hunt told BBC Sport.

"We still think there's so much more to come. The target on our back is amazing because you know people are coming after you and they fear you a bit and what's not to love about that?"

England's Rugby Football Union leads the way on investment in its women's side.

Other unions are starting to catch up, with Wales handing out 12 professional contracts for the first time before the Six Nations.

The majority of England's squad have been professional since 2019, two years after the RFU launched the Premier 15s league to aid player development.

All that investment is paying dividends now and Middleton boasted at the start of the Six Nations that he had enough talent for two equally-strong starting XVs.

After Saturday's win, Middleton said it was the best England side he had ever coached. The challenge now will be to decide who makes it on the plane to New Zealand.

World Cup organisers have not yet announced how big squads can be, with levels of Covid-19 in the host country a deciding factor, but they are unlikely to be larger than 36 players.

That leaves Middleton and his staff with plenty of thinking to do and backs coach Scott Bemand said conversations would continue even as England celebrated their win on Saturday night.

"We enjoy the discussion around it and the girls have made those discussions harder and harder," he told BBC Radio 5 Live's Rugby Union Weekly.

"We're nowhere near where we think we can get to with this group but it's exciting."