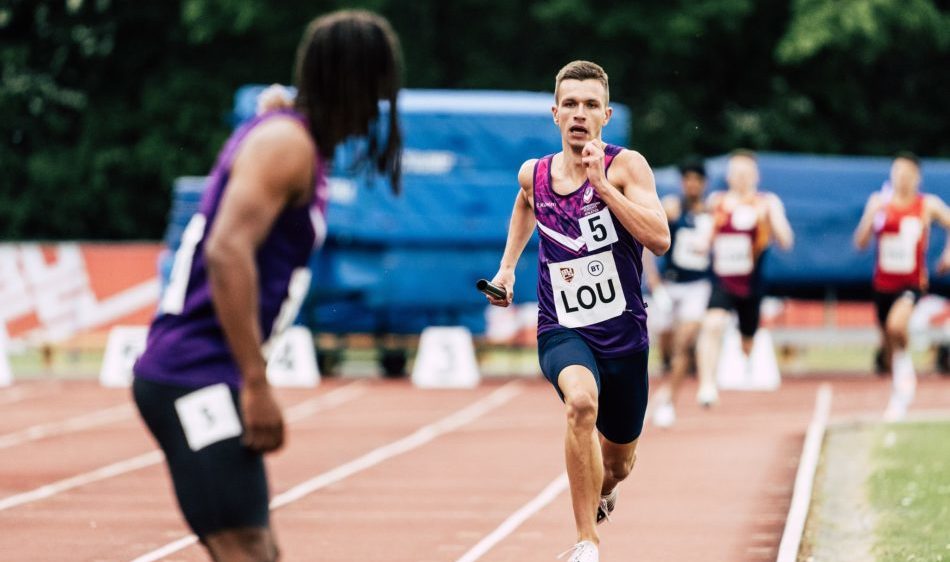 On an exceptionally busy bank holiday weekend, there were stunning performances on road and track with Loughborough dominating the student event at Chelmsford

To read about the adizero Road to Records at Herzogenaurach, Germany click here

The British Universities and Colleges Sport Championships was successfully held at Chelmsford for the first time.

The men’s 4x400m saw Loughborough destroy the 4x400m championships record with 3:05.18. Charlie Dobson continued his impressive start to 2022 with a stunning lead off of in an unofficial 45.2 while an isolated Alex Haydock-Wilson was also inside 46 seconds on the final leg.

They won by over 10 seconds from Cardiff Met in recording a time that only Loughborough themselves and Southampton have bettered among non-international British teams.

Loughborough dominated the team competitions with their men on a different level scoring 214 points to the next best of Cardiff Met’s 97 and Birmingham’s 67.5.

In her season’s debut, Olympic medallist Holly Bradshaw won the pole vault with a comfortable 4.50m before attempting 4.63m as Molly Caudery took silver with a 4.20m leap.

Jess Judd front ran a championships best of 4:10.79 in the 1500m. Louise Shanahan finished quickly to finish second in a PB 4:13.27 to pip a tiring Sabrina Sinha (4:14.32), who had bravely held on to Judd until the final backstraight.

Surpringly the BUCS and Inter-Counties cross-country runner-up Zak Mahamed was in the B race but his solo 14:15.39 stood up as the fastest as the A race’s Luke Duffy’s 14:18.81 fell short as he held off Alfie Manthorpe.

There was a more competitive women’s one-lapper with Natasha Harrison’s PB 53.95 narrowly seeing off Hannah Kelly’s 54.04.

European under-23 champion Isabelle Boffey easily won the 800m by three seconds in 2:05.17 and then ran an impressive 4x400m anchor to hold off 400m winner Harrison of Loughborough as Birmingham won in 3:40.93.

The men’s race was a much closer affair with European indoor medallist Jamie Webb leading until late but fading to fourth in 1:48.25 as Dan Howells won in 1:47.97 to resist a late sprint from Sadam Koumi El Nour’s big 1:48.09 PB.

Joseph Gilkes took triple jump gold in a wind-assisted 15.07/2.1 while Toni Ademuwagan was a class apart in the high jump with a 2.12m leap as was Laura Zialor (1.86m meeting record) in the women’s contest.

Serena Vincent’s 16.10m took the shot title while Taia Tunstall’s 51.93m dominated the discus and Zoe Price’s 59.49m was the best of the hammer throwers.

Rebekah Walton came out on top in the javelin with a 51.06m throw.

The steeplechase titles were impressively taken by Will Battershill (8:56.39) and Maisie Grice (6:27.28) the latter with a very strong last lap to set a clear PB.

Pick of the ambulant winners was probably Thomas Young’s 11.27 100m victory ahead of Emmanuel Oyinbo-Coker’s 11.43.

Todd-Warmonth’s was also in a mixed competition though it was not of great help as she won the race by 11 seconds in improving her previous best from her 9:19.77 Schools International win at Derby in her previous track race last September.

Lawrence Okoye lost his world age-19 discus record at the weekend but made an excellent start to his 2022 season with a world class 65.49m victory which is a UK lead.

Catch her at @birminghamcg22 because it also meets the Commonwealth qualifying standard. pic.twitter.com/hhHnMQ1t78

Jessie Knight had a good double running a mixed flat 300m in a 36.96 PB and running 55.46 in the 400m hurdles to set a European Championships qualifying time but just miss the world qualifying time of 55.40. Hayley McLean was second in 57.28.

Currently British-based American Chase Ealey won the shot with a top class 18.74m throw ahead of a below par Sophie McKinna’s 5.99m with heptathlete Holly Mills third in 12.50m, with the latter winning the javelin with a 33.23m throw.

There was a Chilean record of 67.02m by Claudio Romero ahead of Jamaican Roje Stona’s 65.11m PB.

The steeplechase saw victory for Isaac Updike in 8:22.96.

A Jamaican team including the Clayton sisters set a meeting record 43.18 n the High School 4x100m.

There was British success in the 400m hurdles though as Lina Nielsen won in a PB 54.76 which is a European lead and well inside the World Championships standard of 55.40.

Though only eighth, Former European Indoor 60m champion Asha Philip made a good outdoor debut in 11.38.

World heptathlon champion Katarina Johnson-Thompson competed in three events, throwing 12.68m in the shot, 38.63m in the javelin and achieving a more promising 6.33/0.7 in the long jump to finish second behind Abigail Irozuru’s 6.39/0.0.

Jorinde van Klinken gained a shot and discus double with throws of 18.45m and 64.75m.

In the field, Jordan Geist headed the shot field with a 21.03m throw.

In other field action Clayton Fritsch topped the men’s pole vault with a 5.75m leap while Will Williams’ 8.12/0.7 took the long jump contest.

Favour Ashe belatedly celebrated his 20th birthday by winning the men’s 100m in a wind-assisted 9.79/3.0.

Olympic 400m champion Shaunae Miller-Uibo won her heat in a wind-assisted but impressive 10.92/5.5.

World shot champion Joe Kovacs made an impressive seasonal debut with a world-leading 22.46m and had three other throws over 22 metres.

Joe Kovacs ?? became in the first athlete over 22m in men’s shot put this 2022 in his season opener yesterday

That time bettered the British under-23 record of Dave Bedford when he ran a European record 27:47.0 on cinders in Portsmouth in 1971.

European under-23 finalist Elise Thorner also bagged a European qualifier of 9:32.42 finishing second in the steeplechase.

Elise Thorner runs 9:32.42 in the 3000m steeplechase and goes seventh on the UK all-time list. pic.twitter.com/pwyU0WYfQZ

It moved the 21-year-old to seventh all-time in the UK and was an eight-second PB.

Vanessa Fraser won the 5000m in 15:19.11 with Commonwealth Games 1500m medallist Melissa Courtney-Bryant just missing the European qualifier with 15:25.90 after an injury-hit 2021 but setting a Welsh Commonwealth qualifier.

Erriyon Knighton was not the only world junior record setter this week as there was a stunning 100m mark of 9.96/1.9 by Botswana’s Letsile Tebogo and it was also a senior record. The previous record was Trayvon Bromell’s 9.97 in 2014.

The 18-year-old is the first athlete from Botswana to run under 10 seconds over 100m ??

Fellow junior Benjamin Richardson from South Africa was second in 10.08.

The Olympic 200m silver medalist Christine Mboma showed her speed is continuing to improve as she ran her first-sub 11 with 10.97/1.6 in the 100m.

It was a Namibian senior record and an African under-20 record.

The former world champion Julius Yego won the javelin with a 76.57m throw.

Third overnight, Markus Rooth won the decathlon in a Norwegian record 8307 just ahead of compatriot Sander Aae Skotheim who also bettered the previous mark with a 8298 score.

Dario Dester set an Italian under-23 record of 8109 for third.

There was a big breakthrough for Lewis Church who scored a PB by 228 points with a score of 7773 to gain an England Commonwealth Games standard.

There was an Uruguayan men’s long jump record by Emiliano Lasa of 8.28/2.0 in near perfect conditions.

Jade Barber won a more clearcut victory in the women’s hurdles in a 12.78/0.5 PB

Almir Cunha with 17.04/0.7 was best at the triple jump while Yuliana Angulo equalled her Ecuadorian long jump record with a 6.67/1.1 leap ahead of triple jump specialist Thea Lafond who set a Dominican record 6.64/0.4 but the latter lost in her speciality with 13.83m to compatriot Ana Tima’s 14.08/1.0.

Jonathan Kapitolnik cleared a 2.30m PB in the high jump to equal the world outdoor lead.

The men’s race was much closer with Charles Wanjiku and Reid Buchanan sharing the first time of 35:08 with Wanjiku edging it from the American.

Chernet Misganaw Takele set a women’s course record of 71:28 while Bilal Marhoum was first man in 64:05.

Pittsburgh Marathon and Half-Marathon, USA, May 1

Sydney 10km in the Olympic Park, Australia, May 1

Lisa Weightman, who is now aged 43, won with a 31:20 PB which is also an Australian all-comers record and world masters record.

Ethiopian Kebede Olkeba won in 28:39 with German Domenika Mayer first in the women’s event in 32:47.

This seaside event saw a very clear men’s victory for Joshua Teece (32:06) while W35 Caroline Arckless was first woman in 41:54.

Orion Harrier Chris Kennedy, who competed for Ireland in the 1987 World Championships marathon and has a 2:35:05 marathon PB, ran 70:05 which was the fastest W60 or W65 time in Britain this year but won’t count in the UK rankings as she is now officially American.

Sixteen-year-old Connor Bell, who ran for Scotland in the Schools International cross-country, ran his first ever 10km and won in 31:53.

The women’s winner was only a year older as Valencia Wright led home in 38:15.

Cardiff Race for Victory 5km, May 1

Adrian Mussett, fourth in the English National in 2003 at Parliament Hill, made an excellent debut as a M50 as he won the race outright in 32:06 to go top of the UK age group rankings for 2022.

Abigail Halcarz was the leading woman in 80:03.

Glasgow 3km on the Green, April 30

M45 masters international Andy Bond’s 15:26 PB was the pick of the age group performances while English Schools cross-country champion Louis Small was the fastest under-20 with 14:30 from his twin brother Jack’s 14:36.

Kirsty Longley ran 16:48 finish which allows her to stand third  on the W45 UK all-time list behind Bronwen Cardy and Jo Pavey.

Marathon and ultra runner Ollie Garrod showed good speed to win in 15:24 while South of Thames cross-country medallist Katy Rowland (17:28) was first woman in a PB time ahead of W50 Susan McDonald’s 18:30.

British Masters M55 champion Andy Leach topped the age-grading with 95.9 per-cent for his 16:23.

This race is held in commemoration of Blackheath Harrier Ted Pepper who lost his life in the Three Peaks race in 1978 after straying off course.

The race started as a seven mile road race in 1979 won by Olympic marathoner Barry Watson and was switched to a 10km in 1991 but has effectively been a trail and cross-country race since 2012.

Having first been successful fifteen years ago, W55 Clare Elms won the women’s race for a record seventh time by over two minutes from Ruth Aylward (42:21) and finished fifth overall in 39:58.

Fellow Kent county masters champion Micah Evans, a M40 competitor, was equally dominant in the men’s race in a time of 36:32 despite a calf problem with M50 Tony Crowder second (39:10).

Brennan Townshend regained the Three Peaks crown he won in 2019 with a win in 2:55:34 for the famous 24 mile event that has 4500 feet of climbing and was held as a trial race for the European Mountain and Trail Championships.

Sarah McCormack, who was 12th in the 2019 World Mountain Championships in Argentina, won the women’s race in 3:23:21.

One week after his Dudince win, Olympic champion Massimo Stano added the Italian 20km walk title in 1:21:21 ahead of Gianluca Picchiottino’s 1:21:37 and Francesco Fortunato’s 1:22:13.