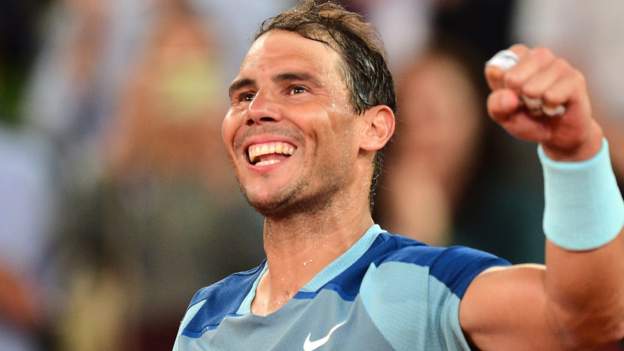 Rafael Nadal's latest comeback from injury began with a straight-set win over Serbia's Miomir Kecmanovic as he moved into the Madrid Open third round.

Five-time champion Nadal did not expect to play in Madrid after suffering a stress fracture of the rib in Indian Wells at the end of March.

But the 21-time Grand Slam champion announced last week he was going to play and looked in good shape against world number 32 Kecmanovic.

Nadal eased through an opening set where he did not face a break point and, after rain interrupted play, broke for a 3-2 lead in the second set.

Kecmanovic, who has enjoyed a career-best start to the season with 23 victories so far, instantly broke back for 3-3 and did the same when Nadal had taken his serve for a 6-5 lead.

To the delight of the home crowd, Nadal dominated the tie-break to set up a last-16 match against either Belgium's David Goffin or Botic van de Zandschulp of the Netherlands.

"When you put everything in consideration it was a great match," world number four Nadal, who goes for a record-extending 14th French Open title later this month, told Amazon Prime.

"I had some good moments, I made some mistakes but it is normal after so long without playing. I'm happy with the victory."

Nadal is joined by three British players in the Madrid third round after Norrie and Evans followed Andy Murray into the last 16.

It is the first time a trio of British men have gone that far in an ATP Masters 1000 event on clay.

Murray beat 14th seed Denis Shapovalov on Tuesday and will face world number one Novak Djokovic in the last 16 on Thursday.

The 34-year-old Scot was joined by Norrie and Evans when the pair secured impressive victories on Wednesday.

British number one Norrie was able to find decisive breaks at key moments of the first and third sets to see off big-serving American Isner.

Evans, who has been short of wins this year, fought back after home favourite Bautista Agut served for the match at 5-4 in the decider.

After dominating the tie-break, 31-year-old Evans goes on to play world number eight Andrey Rublev, who survived a scare against young Briton Jack Draper on Tuesday.