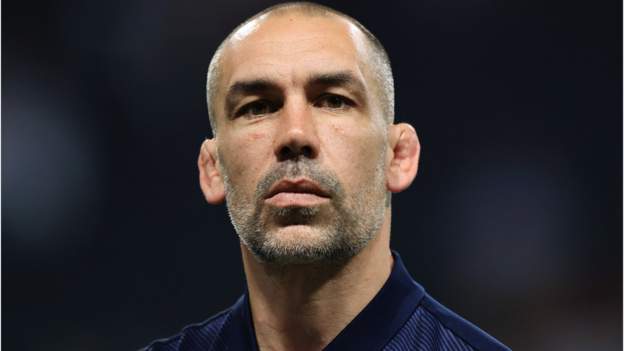 Sale Sharks director of rugby Alex Sanderson says the reduction in the Premiership salary cap is making it harder for English teams to compete with French sides in Europe.

There will be no English representation in the Champions Cup semi-finals after Sale were beaten 41-22 by Racing 92.

"You don't have the money to sign the quality needed," said Sanderson.

In England's top flight, changes have also been agreed to the marquee player dispensation, which will remain as two players' salaries not counting towards the cap for the next two seasons before being reduced to one from the 2022-23 season.

Exeter won the title in 2020 to keep the trophy in English hands for the fourth time in five seasons. However, there have been slimmer pickings since then, with no Premiership side making the last four in each of the past two seasons.

Asked if the salary cap was preventing English teams from competing with their French counterparts - who will provide three of this season's last four - Sanderson said: "Yes of course it does.

"There's been a difference in the salary cap forever between the French and English clubs. Toulon used to have a £20m salary cap and the English clubs were on £5-6m - and yet they managed to win.

"You can make up the gap in the salary cap through really good coaching, decent infrastructure, and culture as well. You can bridge the gap through talent, through cohesion and decent coaching."

Sale produced an impressive first half in Paris as they led 10-6 at the interval before Racing turned it around after the break with four tries.

"It's really frustrating," said Sanderson. "I don't think you can argue with the result. You don't win quarter-finals by shipping 40 points.

"It wasn't for a lack of effort. Our set-piece, and our physicality for the most part, was right up there, but some of our decisions gifted them some fast ball.

"We played into their hands in the second half, and the game went away from us."