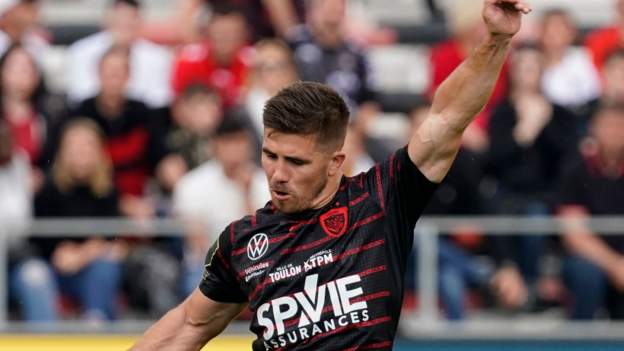 Henry Arundell's incredible length-of-the-pitch try was not enough to keep London Irish in the European Challenge Cup as they were knocked out at Toulon in the quarter-finals.

With the score 19-13, the substitute collected the ball in front of his own try line and ran the length of the pitch to bring his team within a point.

Toulon, who led through a try from captain Charles Ollivon and the clinical kicking of Louis Carbonel, will face Saracens in the last four.

Irish had taken an early 10-0 lead through a converted Albert Tuisue try and Paddy Jackson penalty, but were overhauled after the break.

The Exiles started brightly and went ahead when Tuisue powered over from a well-worked lineout by the visitors.

Baptiste Serin and Agustin Creevy were both sin-binned on 36 minutes, Serin for starting a fight that involved several members of both teams and Creevy for pulling a Toulon player's hair.

Carbonel got the hosts on the board from the resulting penalty before his mammoth kick from the halfway line left them 10-6 in arrears at half-time.

He reduced the gap to a single point with another penalty soon after the restart as the rain began to fall at the Stade Mayol.

Juan Martin Gonzalez was then sin-binned for a high tackle on Carbonel with half an hour to play.

Toulon capitalised as skipper Ollivon picked up the ball and charged through between the posts, with the TMO giving the try after the Exiles thought they had formed a ruck to prevent the play.

Arundell produced the moment of the match - one that will surely be shown again and again - when he picked up the ball and sprinted around and past five players over a total of 119 metres to cross the line and bring the visitors to within one point.

However Jackson missed the kick that would have set up an all-English semi-final against Saracens.

"We made a good start, probably the middle period we made too many errors. The penalty count was too high in that period and it put us on the back foot.

"We tried to finish strongly, but we just couldn't get there in the end.

"They are a tough team on their home turf and you have to give them credit. They got done what they needed to get done and squeezed us there at the end."

(on Henry Arundell)"We weren't surprised when that happened, we know what's possible with him.

"For Henry, Will Joseph, Tom Pearson, Juan Gonzalez, there's four young guys who have got a taste of European rugby in one of the toughest cauldrons. That's great for us and it was great to see Henry do what he did today."