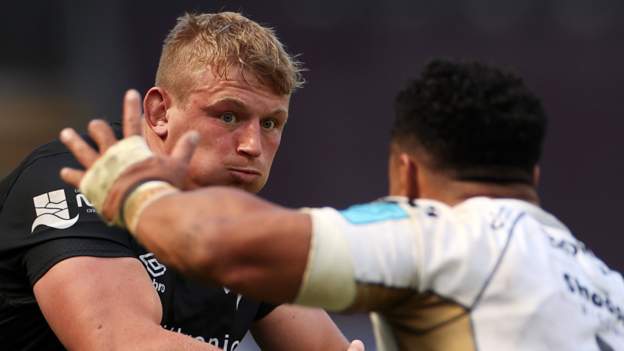 Dean Ryan's side had established a 24-8 lead thanks to tries from Jarred Rosser, Adam Warren and Mesake Doge.

It was the second successive week Ospreys had scored 50 points in a win over a Welsh side, following the eight-try hammering of Scarlets.

The victory in Swansea also means if Ospreys pick up a bonus-point win against Bulls in their final match on 20 May, they will win the URC Welsh Shield by finishing as the top region and qualify for Europe's top tournament.

Scarlets could equal Ospreys' league points tally with a maximum five-point victory over Stormers, but Toby Booth's side would finish above the west Wales rivals, courtesy of matches won.

Dragons had been hoping to bounce back from the 23-18 defeat against bottom side Zebre in Italy and will be encouraged by a battling display. The Gwent region remain in 15th place with only two wins this season.

This rearranged URC game was originally due to be played on 26 December but was postponed because Ospreys had 18 cases of Covid-19.

It was able to played this weekend because no Welsh side had qualified for the quarter-finals of either European competition.

The match took place with the backdrop of a turbulent week in Welsh rugby, with a report commissioned suggesting a region should be cut.

With George North handed his first start in more than a year, only long-term injury victim Justin Tipuric was missing from the Ospreys' strongest starting side.

Fly-half Will Reed made his Dragons starting debut having been preferred to Sam Davies, while Josh Lewis replaced injured centre Jack Dixon.

There was also a late withdrawal with prop Chris Coleman dropping out and Doge starting.

Anscombe kicked the opening penalty but following an acrobatic Rio Dyer take from the restart, Dragons responded with a well-worked try for Rosser.

Reed made a brilliant start as he helped orchestrate the Rosser score and the fly-half was also the architect for the second score for Warren.

A shocked Ospreys side responded with Alun Wyn Jones almost setting up a try for Keelan Giles, but referee Adam Jones deemed flanker Jac Morgan had knocked the ball on.

The hosts' opening try soon arrived as prop Smith, starting instead of Gareth Thomas, barged his way over.

Ospreys' inability to deal with restarts hampered them again as they coughed up possession, allowing Reed to eventually slot over a penalty.

Booth's side were further architects of their own downfall as they looked to attack from deep and lost possession with the Dragons capitalising for a Doge try. Reed converted as Dragons built a 16-point lead.

The home pack again responded from a driving maul with Morris burrowing over.

Michael Collins, having switched to full-back from centre, created the third Ospreys try with an incisive break which was finished by Morgan-Williams.

Wales flanker Taine Basham was shown a yellow card for a petulant and unnecessary trip on Collins.

Ospreys took advantage of the extra man when Morris dived over for his second try and the bonus-point score.

Anscombe's conversion gave the hosts a 29-24 half-time lead before a scrappy start to the second half eventually saw Morris complete his a hat-trick before he was replaced.

Alex Cuthbert was forced off the field after a late tackle from Dragons replacement Sam Davies before Morgan-Williams dived over for his second and replacement hooker Parry completed the Ospreys scoring.

Dragons replacement Lewis Jones scored a consolation and was involved in a scuffle with Luke Morgan, with North and Josh Lewis also exchanging pleasantries.

It was an eventful end to a lively 11-try Welsh derby date.