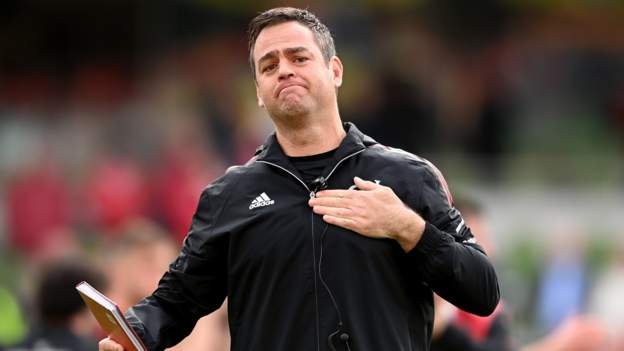 Munster head coach Johann van Graan said he was "incredibly proud" of his players despite their cruel Champions Cup quarter-final defeat by Toulouse.

The Irish province were beaten in a dramatic penalty shootout after the game finished 24-24 after extra time.

"To lose it like that, that's unfortunately sport and that's the way the rules are," said Van Graan.

"If ever there's a day to sum up Munster rugby, it's today - a community of 40,000 people travelling.

Munster had held a 24-14 second-half lead before the defending champions recovered to draw level late on.

Van Graan added: "The man on the street never experiences what these 23 men went through today and they'll remember it for the rest of. their lives.

"One kick is the difference and I am proud of them."

Toulouse will return to Dublin next weekend for a semi-final against 2018 winners Leinster, and captain Julien Marchand said his side will "recover and rejuvenate".

"Apart from hoping that the penalties go over during the shootout, we couldn't do anything else," said Marchand.

"It's sad for Munster to lose that way and we have to remain humble out of respect for their team, but we're delighted to win and move on.

"We'll have to recover quickly because next week is another big game. It will be another massive challenge. We'll regroup and rejuvenate.

"That was a tough quarter-final, but Munster is not just anyone."