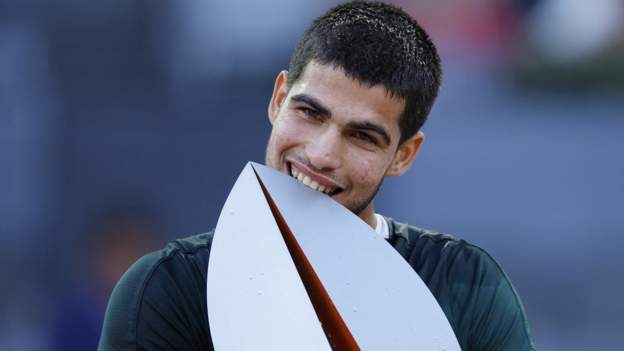 The 19-year-old, who had beaten Rafael Nadal and Novak Djokovic in his previous two matches, swept aside the German second seed 6-3 6-1.

It is Alcaraz's second Masters 1000 crown after Miami last month and his fourth title of the year.

He is set to rise to sixth in the world before the French Open later in May.

"This tournament is special for me because it's a tournament I came and watched when I was seven or eight," he said.

Alcaraz was in determined form from the start against Zverev whose semi-final against Greek fourth seed Stefanos Tsitsipas did not finish until after 01:00 local time on Sunday (00:00 BST).

He outplayed and outfought the German, who was chasing a third title in the Spanish capital, right from the start.

Zverev seemed totally out of sorts and unable to deal with the rising star of the sport.

Alcaraz broke to make it 4-2 in the opening set and was in full control after that, thrilling the home crowd with the variety of his shots and keeping his opponent on the run.

The teenager broke his opponent three times in the second set to wrap up victory in just one hour and four minutes.