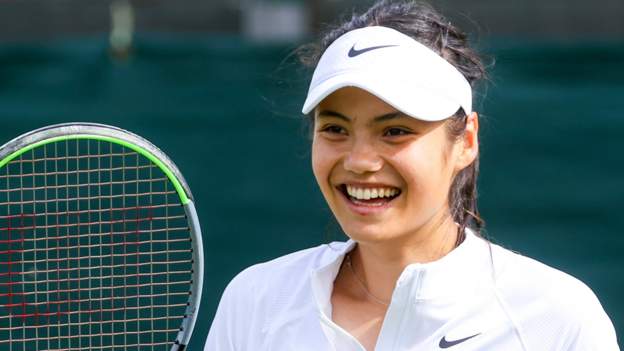 Emma Raducanu is set to make her first appearance in front of a British crowd since winning the US Open at the Birmingham Classic next month.

The 19-year-old, who won the Grand Slam title in New York as a qualifier last September, plans to start her Wimbledon preparations at the grass tournament.

Raducanu, ranked 12th in the world, has not played in a competitive tournament on British soil since her run to the Wimbledon fourth round last summer.

"It will be great to get back on to the grass and relive some wonderful memories from last year, where the backing of the British fans was fantastic," she said.

Raducanu is currently focusing on the European clay-court swing and plays Canada's Bianca Andreescu - another teenage US Open champion after her 2019 win - in the Italian Open first round on Tuesday.

She is without a full-time coach after recently splitting with German Torben Beltz and is working with Iain Bates, the Lawn Tennis Association's head of women's tennis, in Rome.

Asked how she is finding travelling without a full-time coach, Raducanu said: "I'd describe myself as a loner.

"I do like being on my own, but of course I love being in groups as well. I can easily and very happily spend a lot of time on my own. I think it's something that is off court as well as on court.

"For the past year I'd say I've had a lot of people around me a lot and very often.

"To be kind of on my own is interesting because I'm finding out a lot about myself, understanding what I need and what I don't need."