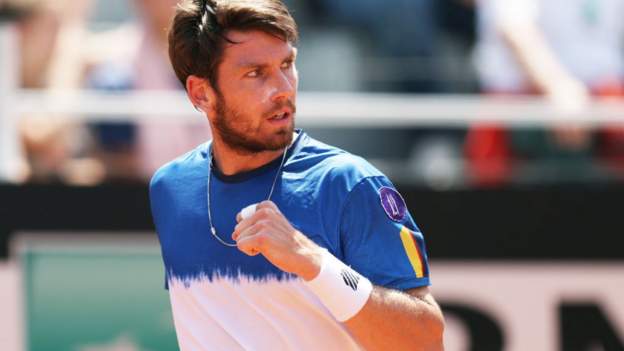 British number one Cameron Norrie shook off some early nerves to beat teenage wildcard Luca Nardi in the Italian Open first round.

"I need to clean up a lot of errors," ninth seed Norrie told Amazon Prime.

"But I was pleased how I turned it around after that start though.

"I came out very, very nervous and very tight for whatever reason. I was just missing a lot of second-serve returns and not playing as aggressive as I would like."

Norrie found himself 15-40 down when serving for the first set, but two big serves pulled him to deuce and he served it out. The Briton broke in the first game of the second set, keeping hold of the early advantage and wrapping up the win when Nardi went long with a backhand.

World number 11 Norrie, who was beaten in the third round in Madrid last week by eventual champion Carlos Alcaraz, will play Croatia's 2014 US Open champion Marin Cilic in the second round.

Among the other men in action on Tuesday at the clay-court event is world number one Novak Djokovic, who faces Russian Aslan Karatsev.

The Masters 1000 event concludes on Sunday, a week before the French Open starts at Roland Garros.

In the women's event in Rome, British number one Emma Raducanu opens her campaign against a fellow US Open champion in Canadian Bianca Andreescu later on Tuesday.