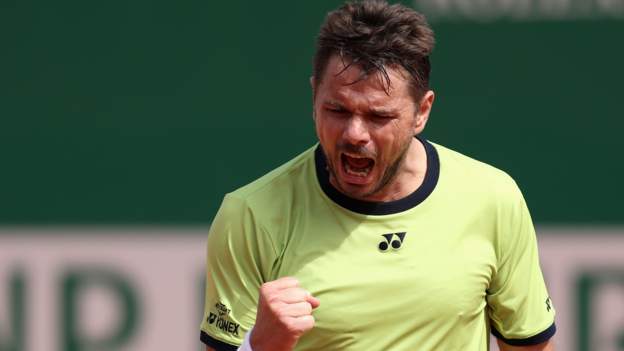 Injury-hit former Grand Slam champion Stan Wawrinka says the love of the fans is what keeps him going after he earned a first ATP Tour win in 15 months.

Wawrinka, 37, fought back from a set and a break down to beat American Reilly Opelka at the Italian Open.

The Swiss, now ranked 361st, was playing only his second tour match since March 2021 after a foot injury.

British number two Dan Evans continued his winless run in the main draw at the Masters 1,000 event after a 7-6 (7-2) 6-2 defeat by Georgia's Nikoloz Basilashvili.

Evans, 31, has now lost all five of his first-round matches on the clay in the Italian capital.

Meanwhile, four-time major champion Naomi Osaka has pulled out of the event because of an injury.

"Unfortunately I'm going to have to withdraw from Rome as the injury which I picked up last week in Madrid hasn't healed yet," said the Japanese player, who is now ranked 38th in the world.

"It's an Achilles injury, so I need to be careful especially in advance of Roland Garros."

The French Open starts at Roland Garros on 22 May.

Osaka, 24, withdrew from the clay-court Grand Slam last year following the controversy over her refusal to speak to the media at the tournament, revealing she had "suffered long bouts of depression" since winning her first Grand Slam title in 2018.

Since taking a break from the sport last year, she has won 12 of her 16 matches this season.