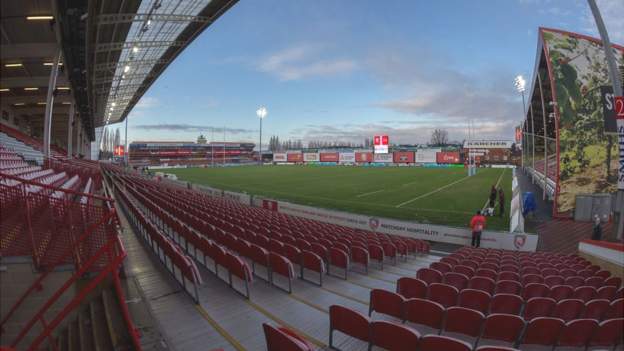 Gloucester will seek compensation from Worcester for calling off their March Premiership match at short notice.

Warriors claimed they could not field a team for the Kingsholm fixture on 25 March following a spate of injuries and illness, including Covid-19 cases.

But an independent panel rejected Worcester's argument, awarding their opponents a 20-0 win and five points.

"We are pleased the independent panel rejected Worcester's claims that the cancellation was due to Covid-19, and that they did everything they could to field a team. As is evident in the report, clearly neither of these things was the case.

"The club will now seek compensation from Worcester Warriors through the relevant channels."

The panel - appointed by Premiership Rugby to adjudicate on the outcome of the fixture - stated that Worcester could have done more to secure loan cover for their unavailable front-row players before the 17:00 deadline on that Friday, 25 March.

Warriors team manager Luke Broadley sent a WhatsApp message to his Premiership counterparts the day before the game, asking if any loose-head or tight-head props were available, while telephone calls were made to Championship clubs Hartpury and Cornish Pirates.

'Welfare and health of our players'

At one stage, Gloucester even offered to loan their opponents a loose-head prop and chairman Martin St Quinton messaged his Worcester counterpart on the morning of the match, voicing concern that a postponement would cost his club £250,000.

Broadley finally confirmed just before 14:00 on the day of the match that Worcester would be unable to field a team.

However, the panel concluded: "We consider that even reasonable steps to loan a player or players should have involved speaking to more clubs than the two Championship clubs Worcester in fact approached.

"We would conclude that the unavailability of front-row players (and thus the cancellation of the match) was not 'the direct result of Covid-19' nor was it 'related to Covid-19'."

Worcester confirmed they would not appeal against the panel's decision, stating: "Our sole consideration in the decision that led to the cancellation of the Gloucester match was the welfare and health of our players and staff.

"At no stage did we seek to gain any advantage by cancelling the match. The judgment has, however, highlighted areas in our processes that could be improved."