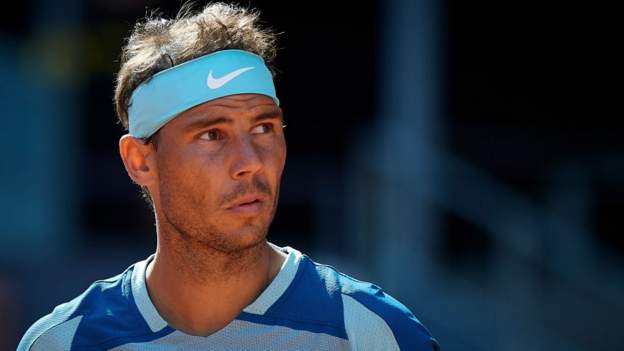 Rafael Nadal maintained his record of never losing back-to-back matches on clay with victory over John Isner at the Italian Open.

The Spaniard, beaten by Carlos Alcaraz in last week's Madrid Open quarter-finals, returned to his favourite surface with a 6-3 6-1 win over Isner.

The victory put Nadal into the third round in Rome and got his preparations for his pursuit of a record-extending 14th French Open title back on track.

He faces Denis Shapovalov next.

Third seed Nadal, who had received a first-round bye, was given a stern test in the seventh game of the first set against his American opponent.

But he saved two break points and capitalised on Isner's disappointment over the missed chances by stringing together a run of five games in a row to go a set and a break up.

The 10-time champion did not look back, with big-serving Isner managing only one hold during the rest of the match, and Nadal eventually took victory with a huge forehand down the line.

The win put him through to another encounter with Canadian world number 16 Shapovalov, against whom he saved two match points when beating him in the third round at this event last year.

"I know how dangerous he is," Nadal, 35, told Amazon Prime, when asked about his next opponent. "I need to play well, I need to play better than today."

Fourth seed Stefanos Tsitsipas had to come through a much tougher test, saving two match points before beating Grigor Dimitrov 6-3 5-7 7-6 (7-4), while second seed Alexander Zverev of Germany advanced to the third round with a 7-6 (8-6) 6-3 win over Argentina's Sebastian Baez.

British number one Cameron Norrie lost 5-7 6-2 6-1 to veteran Marin Cilic as he appeared to struggle with injury.

The ninth seed required treatment on what looked like an injury to his right foot in the third set, joining Britain's women's number one Emma Raducanu - who retired from her match on Tuesday - as a worry for the French Open.

The Briton had to break back twice against the former US Open champion before winning the opening set 7-5 in an hour, but took just three games from the Croat in the final two sets.

The Masters 1,000 event in Rome finishes on Sunday, a week before the French Open clay-court Grand Slam begins at Roland Garros.

In the women's event in the Italian capital, world number one Iga Swiatek remains on course for a fifth successive WTA title after beating Elena-Gabriela Ruse 6-3 6-0 to set up a third-round meeting with Victoria Azarenka.

But former champion Karolina Pliskova made an early exit with a 6-2 4-6 6-4 defeat by Switzerland's Jil Teichmann.