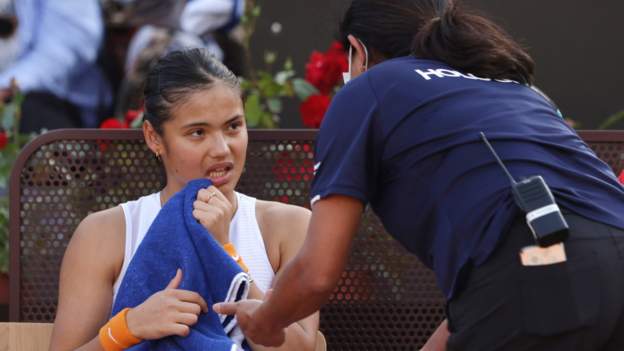 British number one Emma Raducanu was forced to retire from her Italian Open first-round match when she was again hampered by a back injury.

Raducanu has been managing the issue in recent weeks but, after needing off-court treatment, could not continue against Canada's Bianca Andreescu.

It is the latest in a series of niggles that have dogged the US Open champion in her first full year on the WTA Tour.

"I was definitely disappointed with how today went, but I guess I wanted to give it a try," Raducanu said. "I never really knew how bad it was until I kind of went out there.

"I'm still learning when it's right to push my body and push through it, and when it's not. I guess that's something I'm learning at these tournaments.

"After Madrid, I thought that maybe taking one, two days off, it would just go away because a lot of the other small niggles I've had, they've kind of gone away after taking two days off."

Raducanu, ranked 12th in the world, will be hoping the injury improves before the French Open starts.

The clay-court Grand Slam begins on 22 May and Raducanu will be playing in the main draw for the first time.

Raducanu struggled with a back injury during her defeat at the Madrid Open last week and said before facing Andreescu in Rome she was "managing" the problem.

The British teenager needed an injury timeout at 5-2 in the first set, going off court for lengthy treatment.

After initially appearing to serve better in the second set, she told the umpire she could not continue after losing serve for the third time in the match.

It was a disappointing end to a highly anticipated first contest between two of the most talented youngsters in the game.

The match-up between the pair - who have parallels as unexpected teenage US Open champions and both born in the same part of Canada with Romanian heritage - made for an intriguing prospect.

Andreescu, 21, has suffered serious physical issues herself since winning the Flushing Meadows title in 2019, admitting recently she had considering quitting the sport.

But she showed signs of her best form - demonstrated by powerful returning, precise winners and a solid second serve - to dominate Raducanu before the match came to an early conclusion.

"It's definitely been difficult for me but I'm slowly getting back to my top form, which I'm pleased about," Andreescu told Amazon Prime.

"I hope Emma's injury - or whatever she is dealing with - isn't so bad. She is an amazing player. She's dealing with something and I hope she is OK."

Raducanu's retirement was her second of the season after a leg injury forced her to stop in Mexico in February.

She also struggled with a blister on her racquet hand in her Australian Open second-round defeat in January and had to bathe her blistered feet in surgical spirit during Britain's Billie Jean King Cup defeat in the Czech Republic last month.

Her debut in the women's team event ended in painful fashion when she struggled to move throughout a defeat by Marketa Vondrousova.

Raducanu knew she would have to build up her physicality going into a first full year on the WTA Tour, but her pre-season fitness work was hampered by contracting coronavirus.

"We've talked about the lack of physical foundation but she hasn't had the opportunity to put the work in away from tournament play," said former British number one Tim Henman, speaking in his role as a courtside analyst for Amazon Prime.

"That's the ideal scenario in November, December, when you don't have tournaments. Unfortunately for Emma she got Covid, missed three and a half weeks and has been playing catch-up."

Raducanu is without a full-time coach after parting ways with German Torben Beltz at the end of April and was working with Iain Bates, the Lawn Tennis Association's head of women's tennis, in Rome.

While Raducanu seems content to continue with a small team and "figuring things out" for herself, Henman believes she needs more support.

"When things are going well it is not difficult as a world-class player, but it is dealing with adversity where it gets more challenging," said Henman.

"She has had a few bumps in the road and I think this is where she needs support."