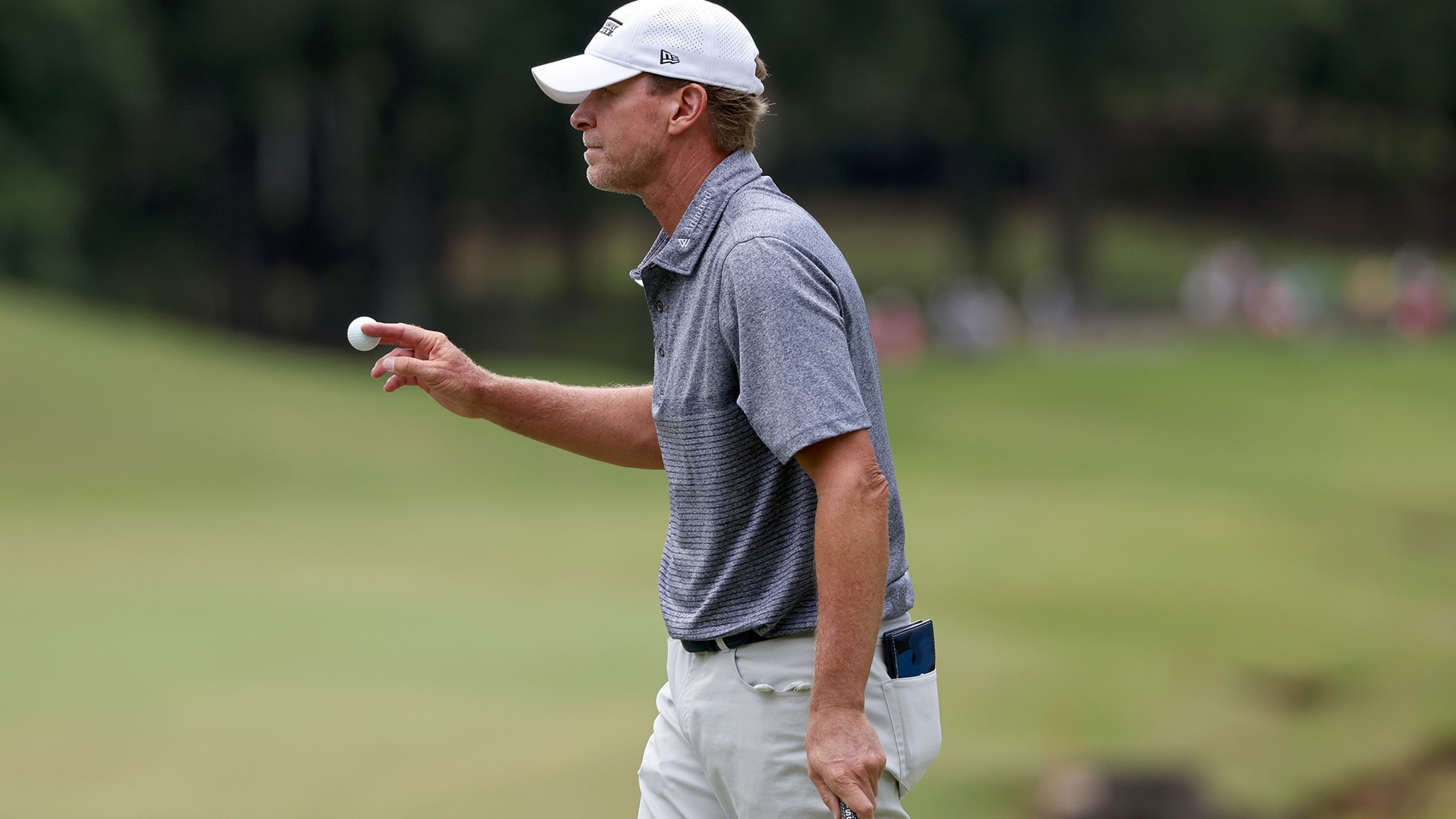 BIRMINGHAM, Ala. — Steve Stricker shot a 4-under 68 to maintain a two-stroke lead Friday over Scott McCarron and Padraig Harrington in the second round of the Regions Tradition, the first of five PGA Tour Champions majors.

Stricker, who has won and finished second the last two trips to Greystone Golf & Country Club, is continuing his comeback from a health scare that landed him in the hospital for nearly two weeks last year.

He had only his first bogey of the tournament on the par-5 fifth hole but never lost his lead. He was at 11-under 133.

“The three-putt kind of put a little skid into my round really quick,” said Stricker, who was captain of the winning U.S. Ryder Cup team at Whistling Straits last year. “But all in all, I did a lot of good things and played out of the fairway a lot and was able to give myself some good looks, so it was another good day.”

He said he was able to hit some balls after the first round Thursday “and had quite a bit of energy.”

“I was a little more fatigued this morning waking up,” Stricker said Friday. “Rest the next couple of days is paramount.”

World Golf Hall of Famer Ernie Els was three shots back after his second straight 68. Els finished with a birdie after bogeying a pair of par 3s, Nos. 4 and 17.

John Daly was disqualified for failing to sign his scorecard after a 72. He had opened with a 68. Daly was 4 under in his second round before making double-bogey on two of his final three holes.

McCarron, who started on the back nine, had a five-birdie, six-hole stretch before his only bogey of the round on No. 18.

During his comeback after undergoing ankle surgery last August, he hadn’t finished higher than 34th or under par over his first eight events of the year.

“I haven’t had many good rounds or tournaments this year, but I’m happy to be playing,” said McCarron, adding that he hadn’t had much pain in his left foot the first two rounds. “I’m still coming off of that surgery. The doctor said it would be about a year before I can really go at it, but I’m ahead of schedule and I’m just happy to be out here playing.

“To be able to go out and play well today was a nice bonus.”

Harrington closed out his 66 with birdies on 17 and 18. It’s his first Regions Tradition.

“It’s quite intimidating, the golf course itself,” Harrington said. “There’s plenty of danger out there. You’re always a little bit wary.

“But there are certainly some holes you can score on. If you hit good shots, there’s plenty of birdies and eagles to be made.”

Miguel Angel Jimenez, Stuart Appleby and Steven Alker were 7 under.

Jimenez, the 2018 champion, eagled No. 15 to highlight a 70 after joining Wes Short Jr. in second place after the first round. His tee shot was stopped short when it struck Els’ ball. Alker, the Charles Schwab Cup points leader, shot 69 despite making three straight bogeys, matching Appleby’s Day 2 score. Alker has two wins and a second-place finish in his last three events. Short fell back with a 73.