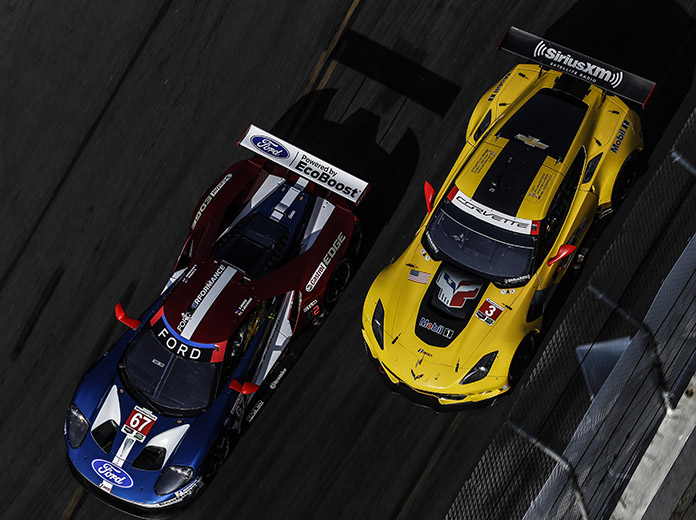 In most other places around the world, seeing a Porsche 911, Corvette or an Acura NSX in the wild is rare. In SoCal? Happens a lot.

That’s one of many reasons why this weekend’s annual IMSA WeatherTech SportsCar Championship BUBBA burger Sports Car Grand Prix at Long Beach is so important. The 100-minute race, which will be televised live on NBCSN at 5 p.m. ET Saturday, puts race car versions of the world’s great automobiles in front of many people who own and drive them regularly.

The 45-year-old race is a home game for Southern California-based Acura. So much so, in fact, that the manufacturer jumped at the chance to take over the naming rights for the overall event weekend. For the first time in 2019, the event is now known as the Acura Grand Prix of Long Beach.

Acura will be competing for the overall BUBBA burger Sports Car Grand Prix victory in the Daytona Prototype international (DPi) class, with Dane Cameron and Juan Pablo Montoya sharing the No. 6 Acura Team Penske ARX-05 DPi machine and Ricky Taylor and Helio Castroneves in the team’s No. 7 Acura DPi.

“With our U.S. headquarters nearby in Torrance, this is a true ‘home’ event for the Acura brand,” said Acura Vice President and Brand Officer Jon Ikeda. “The Grand Prix of Long Beach is one of North America’s premier motorsports events, and an institution in Southern California. Acura is delighted and proud to be associated with the Grand Prix of Long Beach, and we look forward to a long and successful partnership.”

Chevrolet is the winningest IMSA manufacturer on the streets of Long Beach with nine victories, including GT Le Mans class victories at Long Beach each of the past two years with Corvette Racing and co-drivers Tommy Milner and Oliver Gavin in the No. 4 Corvette C7.R. The team returns this year with that same car and lineup, as well as the two-time and defending GTLM champion No. 3 Corvette C7.R team and co-drivers Jan Magnussen and Antonio Garcia.

“For Chevrolet, Long Beach checks all the boxes as an important event,” said Michael Stouffer, Chevrolet Motorsports Marketing Manager for IMSA and the NTT IndyCar Series. “The crowds are always energetic, the race itself is steeped in history and the Southern California market is a target-rich environment.

“Our Corvette brand fits in perfectly with the Southern California market. That’s evident each year with a full Corvette Corral. We have a fantastic group of Corvette owners in the L.A. area and we’re proud to race in front of them each year.”

It’s a big event for Chevrolet’s Detroit rival, Ford, also. This weekend’s GTLM field includes the pair of Ford Chip Ganassi Ford GTs, the No. 66 co-driven by Joey Hand and Dirk Mueller and the No. 67 shared by Ryan Briscoe and Richard Westbrook.

The roadgoing version of the Ford GT is rare and one of the most sought-after sports cars in the world. But you’re more likely to see one on the streets or freeways in Southern California than most other places in the world.

“There’s no question that Long Beach is one of those IMSA races that every manufacturer and team wants to win,” said Ford Performance Global Director Mark Rushbrook. “Long Beach is the iconic street course race in America with a great history and a tough, unforgiving course.

“We also like it because, unlike so many of the endurance races we run, this is a sprint event that puts added emphasis on being aggressive both with strategy and with driving. We have gotten better there every year with our Ford GTs, so we hope this is the year we’re at the top of the podium.”

Porsche knows all about standing atop the Long Beach podium, as it has won eight IMSA races there in the past. The famed German marque will be represented in the GTLM class by the No. 911 Porsche 911 RSR co-driven by Patrick Pilet and Nick Tandy – who won here in 2016 – and the No. 912 RSR shared by Laurens Vanthoor and Earl Bamber.

It’s also a hometown race of sorts for Porsche.

“California has always been special for us,” said Klaus Zellmer, President and CEO of Porsche Cars North America. “From Johnny von Neumann’s Competition Motors of the early 1950s to our Porsche Experience Center (PEC) and home of Porsche Motorsport North America just down the road in Carson, the soul of Porsche has never been stronger than in Southern California. That Porsche passion is immediately visible during the Long Beach Grand Prix weekend, where IMSA competition captivates world-class teams and fans alike.”

More in this category: « East Carolina Backs Weatherman & Ware At Bristol All American 400 Cancelled Due To Impending Rain »
back to top