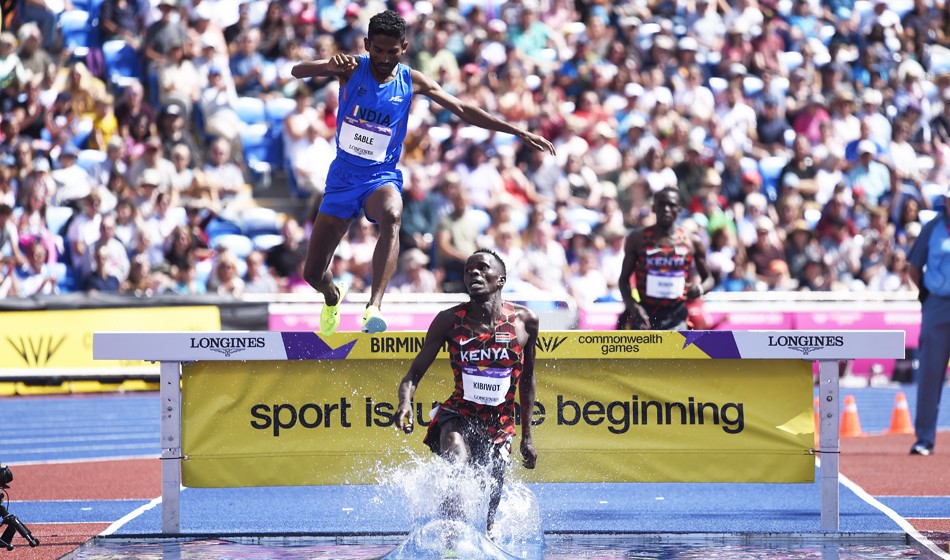 When Abraham Kibiwott entered the final lap of the 3000m steeplechase, he had the weight of a nation on his shoulders. The Kenyan was hotly pursued by Avinash Sable of India and the east African nation – a country which regards the art of steeplechase as its own – was in danger of being beaten in the Commonwealth Games men’s final for the first time since 1986 due to a political boycott of the Games.

The last time Kenya failed to sweep the medals in this event was 1994 when Graham Fell of Canada won bronze. Given this, due to its great history in steeplechase, a Kenyan failure to win gold in Birmingham was inconceivable.

As Kibiwott approached the final water jump he stuttered into the barrier and skipped over it hesitantly. Sable could smell victory. More than that, he could sense the biggest upset of the 2022 Games.

Kibiwott was still in front, though, as the duo swung into the home straight. Roared on by the 30,000 crowd, the Kenyan managed to hold his slim lead down the last 100m as Sable battled to pass him.

Crossing the line in 8:11.15, Kiwibott was a picture of relief. In comparison Sable slapped his hand on to the track in frustration as he clocked 8:11.20. Behind, Amos Serem of Kenya was third in 8:16.83 while Conseslus Kipruto, the two-time world and 2016 Olympic champion from Kenya, faded to an uncharacteristic sixth place in 8:34.96 due to a mid-race back problem, just ahead of the first home nations athlete, Zak Seddon, who ran 8:46.11.

“Last time [in 2018] I got the silver so I am happy to be winning today,” said the winner. “I was fifth in the world championships last month so I have been dreaming about this race since then.”
On his tactics, he added: “I know the guy who was following me and I know he is not that fast. I was not afraid of him so that is why I controlled the race at the front.”

Sable grew up on a farm and had to run several kilometres to school and back every day due to lack of transport. Despite his country’s massive population it has a modest record in athletics with javelin thrower Neeraj Chopra last year becoming the first Indian to win a medal in Olympic track and field.

In 2018 Sable beat the 37-year-old Indian record for 3000m steeplechase of 8:30.88 and has since chopped chunks off the mark, with his latest PB coming behind Kibiwott in Birmingham.

“My last lap was a bit disappointing,” Sable said, “but I’m really happy because it is a long [time] since India won a long distance medal.”

Replacing the 20km race walk on the roads with a 10,000m track event was welcomed by Australian Jemima Montag. “I really feed off the crowd’s energy,” she says.

The 24-year-old medical student used that energy on Saturday morning in the Alexander Stadium to power her way to victory in 42:34.30.

Four years ago Montag won the 20km title at the Commonwealth Games and last month she was fourth in the 20km walk at the World Championships in Eugene and here in Birmingham she showed her class as she passed halfway in 21:36 and won by more than a minute from Priyanka of India as Emily Ngii of Kenya was third.

“It is certainly faster,” said Montag, “and you have to be ready to sit with some lactate, given it is about 10 seconds faster per kilometre. But to have the crowd certainly makes up for that change in pace. I hope the track race walk event can stay.”

Heather Lewis was the first athlete from the home nations as the Welsh athlete finished fifth in a British and Welsh record of 45:09.19, beating Lisa Kehler’s mark from 22 years ago.

Lamara Distin caused an upset in the women’s high jump when the 22-year-old from Jamaica beat world champion Eleanor Patterson of Australia.

Distin, the reigning NCAA (US collegiate) champion, jumped 1.95m on her first attempt to beat Patterson and Kimberly Williamson of Jamaica, both of whom cleared 1.92m.

Morgan Lake was the first English athlete with a best of 1.92m in fourth, as Laura Zialor was eighth with 1.85m and Emily Borthwick 11th with 1.76m.

“To come here and do it [win gold] is such a great feeling,” said Distin. “I just wanted to come here, stay calm, stay focused and get the job done. But this is just the start.”