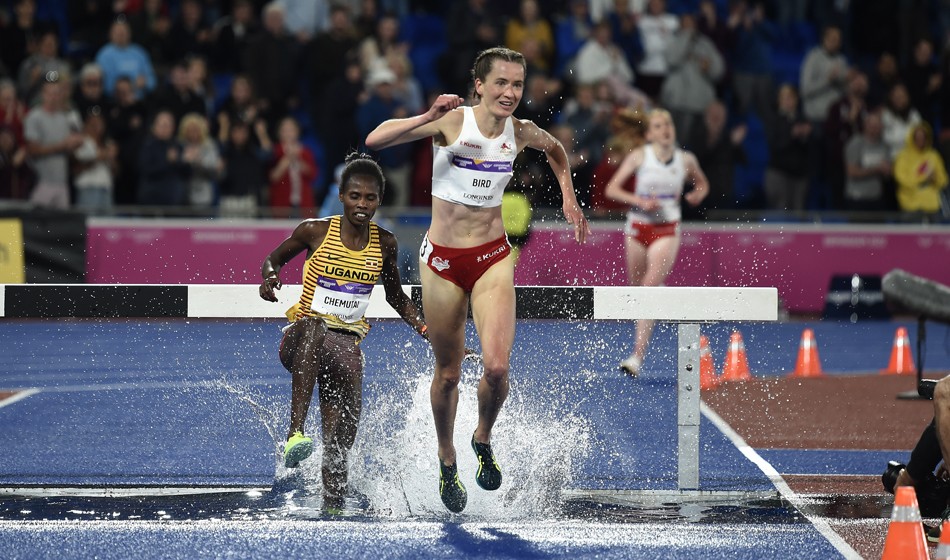 There was high drama and English medal success in the final moments of an eventful Friday night at the Commonwealth Games in Birmingham when Lizzie Bird won silver in the 3000m steeplechase and Naomi Metzger took triple jump bronze with a PB.

Bird was merely the ‘second Briton’ at the World Championships in Eugene last month but she rose to the occasion at the Alexander Stadium and capitalised on the misfortune of Olympic champion Peruth Chemutai as the Ugandan fell with two laps to go.

Chemutai had been battling it out with Jackline Chepkoech – and after Chemutai’s fall the Kenyan went on to win in a Games record and PB of 9:15.68.

But an inspired Bird, who was roared on by the English crowd, made up a sizeable deficit to catch and pass Chemutai on the final bend as she came home second in a PB of 9:17.79.

“That was like nothing I’ve ever experienced before. I’ve done a few major champs but none with that kind of crowd.”@lizziebird94 on an inspired Commonwealth silver medal as she chased down the Olympic 3000m steeplechase champion on the last lap ????????

Chemutai held on for bronze in 9:23.24 and was then given medical treatment on the track following her heavy fall. Aimee Pratt, who broke the British record twice in Eugene last month, was fourth in 9:27.41.

Bird was third in the English Schools 1500m on this same Alexander Stadium track in 2013 but has matured into a world-class steeplechaser since.

“The whole time I was thinking, ‘close that gap, close that gap’ for the last three laps,” she said. “I knew I was close. On the last lap, it didn’t even sound like people cheering. It was so loud.”

Triple jumper Metzger has also experienced English Schools success at the Alexander Stadium, as she won gold here in 2014 under her maiden name of Ogbeta with 12.05m. On Friday night, though, the Manchester athlete produced the form of her life to jump a PB of 14.32m (1.4) in the first round before improving to 14.37m (0.7) in the third round – a distance that was good enough for bronze.

The victory went to Shanieka Ricketts with 14.94m (1.4) in the first round. The Jamaican, who was runner-up to Yulimar Rojas at the World Championships last month, has British links too as her coach and husband, Kerry-lee Ricketts, is a member of Hercules Wimbledon.

Thea Lafond of the Dominican Republic took silver with 14.39m while Kimberly Williams, the defending champion from Jamaica, came close to overtaking Metzger with 14.25m but couldn’t quite manage it.

Metzger is married to 400m international Kevin Metzger and has been known to do stand-up comedy in her spare time. However this was no laughing matter on Friday as she dug deep and charged down the runway to produce the series of her life.

“I feel like I’m in a dream right now,” said Metzger. “I was really hoping I could come away with a medal, so to get a bronze medal and jump a personal best in front of a home crowd was just about perfect.”

“This is my first Commonwealth Games. I’m still young – just 24 – so hopefully in four years’ time I’ll be able to get a higher medal.”

“I knew it was a quality field,” said the victorious Ricketts, “so I had to come with my A game. I just tried to get it right with my first jump, which I did with a season’s best.

“I’m feeling great, especially as it’s my first Commonwealth title. Four years ago, I lost the gold medal on the final jump to my team-mate (Williams). To get the Games record as well is the icing on the cake.