Stanley Cup Playoffs Daily: Stars, Blue Jackets even it up 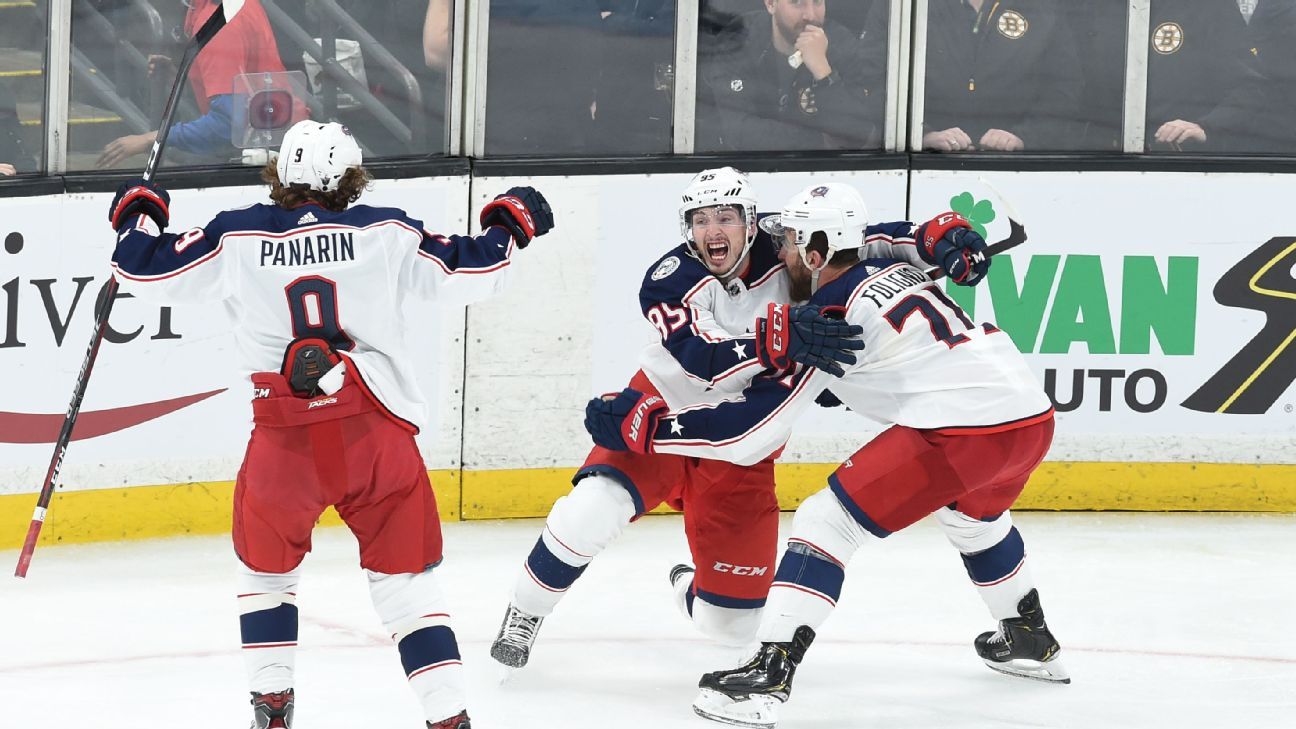 The Columbus Blue Jackets' double-overtime win over the Boston Bruins caps off seven straight nights of overtime playoff hockey, and you won't find us complaining.

Game 2: Dallas Stars 4, St. Louis Blues 2 (Series tied 1-1). This game got wacky late in the first period when, during a 4-on-4, the teams combined for three goals in two minutes. Ben Bishop is now 12-3 in his playoff career following the loss. Production beyond the top line for the Stars no longer feels like a problem. Through eight games, Stars rookies Roope Hintz and Miro Heiskanen have combined for 10 points (six goals four assists). Hintz's second line, with Mats Zuccarello and Jason Dickinson on the wings, has been particularly good. The Blues had some good looks on the power play, but went 0-for-5. They also decided to keep Jordan Binnington in net despite a rough start, and he sharpened up and finished with 34 saves.

Stars even series behind goals from Hintz, Janmark

Roope Hintz and Mattias Janmark both score in the first period to lead to the Stars 4-2 win over the Blues.

Game 2: Columbus Blue Jackets 3, Boston Bruins 2 (2OT) (Series tied 1-1). For the second straight game, this one needed to be decided in extra time. The Blue Jackets had a hard time generating offense early. The game was a bit choppy, with some bloodshed, quite a few turnovers and not many shots. Tuukka Rask would make two terrific saves on Nick Foligno -- one at the end of regulation, one in overtime -- to keep the Bruins in it. Not to be outdone, Sergei Bobrovsky had a series of spectacular saves too, including stoning Patrice Bergeron on two strong chances. Matt Duchene played overtime hero on the power play as the Blue Jackets take home-ice advantage away from the Bruins.

2. Roope Hintz, C, Dallas Stars. After recording one multi-goal game in the regular season (and just nine goals total), the Finn has two multi-goal games now in the postseason, and is tied for the team lead with four goals total.

3. Artemi Panarin, LW, Columbus Blue Jackets. It's looking smarter and smarter for GM Jarmo Kekalainen to have kept Panarin around instead of trading him at the deadline; the Breadman became the first Blue Jackets player with four goals in a single postseason with his game-tying goal at 8:03 of the second period, an absurd shot from a seemingly impossible angle.

This pass is a beauty.

So soft, so sweet. Hintz goes between the legs of a Blues defender to set up Miro Heiskanen with a gorgeous feed.#GoStars | #StanleyCup pic.twitter.com/tZanMv7dX3

We've been lauding Charlie Coyle as one of the best trade deadline acquisitions this season, and he has been mostly terrific. But the turnover that led to Panarin's second goal was criminal. Can't be making blind backhanded passes in your own zone in the playoffs.

If you like tight, low-scoring playoff hockey, well, Game 1 was for you. Carolina is one of the hottest teams in the playoffs right now; after losing the first two games to Washington, the Canes have now won five of their last six. To earn a home split, New York will likely rely heavily on Robin Lehner again. Lehner has given up just one goal in each of his past four games, though the Isles had a 10-day layover sandwiched in.

In Game 1, the Avalanche couldn't keep up with San Jose's second gear late in the game. The Sharks, surprisingly, had their legs after an emotionally and physically taxing opening-round series against the Golden Knights. It was a big night for Joe Thornton's line (five points). And don't look now, but Martin Jones had another good outing. It was a rough night for Colorado defenseman Erik Johnson and Samuel Girard, the latter returning from injury.

Not everyone agreed with Miro Heiskanen finishing outside the top three in Calder Trophy voting.

Justin Faulk just found out Hamilton the Pig was not on the road for Game 1. "Nice to know it's not just the pig. Some of the boys in the room get some credit, too."