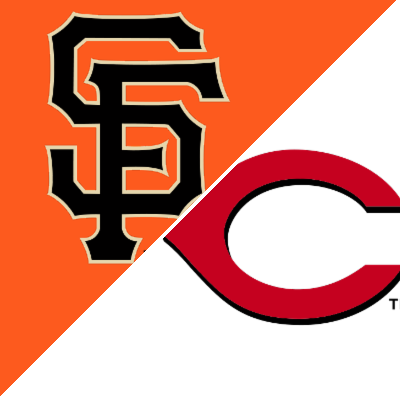 CINCINNATI -- The crowd was energized for Nick Senzel's debut. A pair of three-run homers by Derek Dietrich helped the Reds surge ahead by eight runs. It looked as though the San Francisco Giants were headed for yet another horrid outcome at Great American Ball Park.

Instead, the Giants pulled off an against-the-odds comeback, led by a player who has been through one of his own.

Stephen Vogt hit a tying, two-out homer in the ninth inning, and Evan Longoria connected in the 11th for a 12-11 victory on Friday that ended San Francisco's streak of seven straight losses at Great American Ballpark since 2016.

It was the fifth time in franchise history that the Giants overcame an eight-run deficit for a win. The last time was 1989, also in Cincinnati.

"We've had a tough time here. You come in here, and it's the first game ,and you get down by eight runs, and you say, 'Oh, man, there's something about this ballpark,'" manager Bruce Bochy said.

The Giants put together by far their best offensive game of the season, led by their backup catcher.

Vogt was called up earlier in the week, completing a long comeback from shoulder surgery that wiped out his 2018 season. He got into the game as part of a double switch after the Giants fell far behind. Vogt singled and scored in a three-run rally in the eighth inning, then tied it 11-11 in the ninth with his two-out homer off Raisel Iglesias.

"It kind of felt like my first career homer. I kind of blacked out," Vogt said. "There were a lot of emotions going around the bases, mostly pure joy."

Longoria led off the 11th with a homer off Jared Hughes (2-1) just inside the left-field foul pole, allowing San Francisco to get the better of a matchup between the NL's two worst offenses.

Reyes Moronta (1-2) escaped a threat in the 10th inning. Will Smith retired the side in the 11th for his eighth save in eight chances.

Cincinnati surged ahead 8-0 as Dietrich hit a pair of three-run home runs off Tyler Beede, a former first-round pick who lasted only 2 1/3 innings. A big night for the majors' worst offense -- Cincinnati came in batting .207 -- wasn't enough.

"Incredible, honestly," Beede said. "I put us in quite a hole there."

Senzel played a small role in a wild game. The second overall pick in the 2016 draft was called up and started in center field. He got the loudest cheers in pregame introductions and went 1-for-5 with a pair of walks. He also got an ovation for running down a fly ball on the warning track.

"I've been dreaming about it, and it was nothing like that," Senzel said. "Walking to the plate, hearing my name being called, hearing the crowd -- the city of Cincinnati having my back was something special."

The Giants have struggled to hit, batting .214 as a team, and made a move pregame to help the offense. Outfielder Mike Gerber was called up from Triple-A. He doubled and walked in four plate appearances.

The Giants' other wins after erasing eight-run deficits were in 1947 at Pittsburgh, 1970 at Atlanta and 1970 at the Dodgers.

Dietrich became the first major league second baseman to hit a pair of three-run homers in the first three innings of a game since Reds Hall of Famer Joe Morgan on Aug. 19, 1974, according to STATS.

Reds leadoff hitter Joey Votto made a pair of outs as the Reds sent 10 batters to the plate in the third inning, only the second time in his career that he made two outs in an inning. He also did it against the Mets on July 18, 2008. Votto went 0-for-7 overall, dropping his average to .217.

Buster Posey singled in the fourth inning, extending his hitting streak to a season-high nine games.

The Giants designed outfielder Gerardo Parra for assignment to open a spot for Gerber. Parra signed a minor league deal in February and made the Opening Day roster but batted only .198 with one homer.

Giants: Catcher Erik Kratz went on the 10-day injury list with a mild strain in his left hamstring.

Reds: Third baseman Eugenio Suarez got a planned day out of the lineup. He pinch hit in the ninth and flied out.

Giants: Dereck Rodriguez (3-3) is coming off one of his worst starts, allowing a career-high six runs in an 11-5 loss to the Yankees.