Champions Cup: Leinster focusing on strengths as they meet Saracens in final 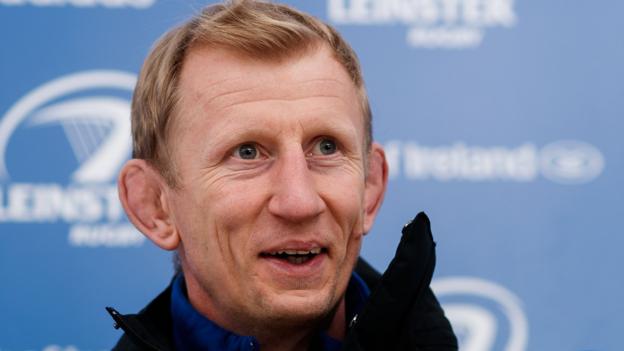 Head coach Leo Cullen says Leinster must not lose sight of what made them European champions as they prepare to defend their title on Saturday.

The Irish province can become the first team to win five European titles when they face two-time winners Saracens.

Cullen expects Saracens to provide a very different challenge from semi-final opponents Toulouse but stressed the importance of Leinster playing to their strengths at St James' Park.

"It is a fine balance, you can't be just thinking about the opposition. You need to understand what makes Leinster a hard team to play against and what it took to get us to a final in the first place," Cullen said.

Toulouse have made the most offloads (116) and beaten the most defenders (235) in this season's Champions Cup but the French side's exciting brand of attacking rugby was no match for Leinster's clinical accuracy in the semi-final battle between the two four-time champions at the Aviva Stadium last month.

Saracens are the top scorers in the competition with 273 points and are tied for Leinster for the most tries scored (32), with the Premiership club's success based around their powerful ball-carrying forwards and an ability to put their opponents under unrelenting pressure.

"We need to understand the threats that Saracens pose and they're so different to the threats that we had in our semi-final against Toulouse because they're at complete opposite ends of the spectrum," Cullen added.

"The challenge is very different and we need to understand what the threat of this team is that we're playing, just like every other week that we play."

Leinster have had a week off to rest their squad after booking a place in the Pro14 semi-finals and Ireland hooker Sean Cronin is the main fitness concern for the province after a recent calf injury, while flanker Rhys Ruddock is expected to return from a concussion.

Scrum-half Jamison Gibson-Park is unlikely to be risked following a recent hamstring strain, which should mean a place among the substitutes for academy player Hugh O'Sullivan on Saturday.

Cullen, who was promoted to Leinster head coach in 2015, has played a role in all four of their European Cup victories and could become the first man to win back-to-back titles as both a player and a coach on Saturday.

The former second row, who has recruited the likes of Stuart Lancaster and Felipe Contepomi to his coaching team, has placed an emphasis on creating a winning environment for his players as they attempt to add a fifth gold star above the crest on their jerseys.

"It's important to make sure that we're more focused on enjoying what we do every day because if we're enjoying it then it's easier to rock in for work and put in the physical commitment that is required and the mental application to go about doing your job well," Cullen said.

"Then it's just enjoying the process of hanging out with other people that are very like minded and enjoy doing the same because then everyone gets that buy-in and lots of great things can happen on the field.

"That's the more important thing for me. The stars [on the jersey] are just the outcome of lots of very, very hard work to get you to that point. I guess once you have them you can't take them away, not to get too cliched about it but that is an important element to it."