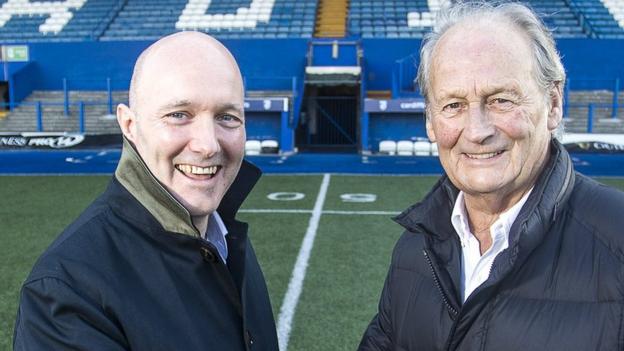 Former chairman Peter Thomas has written off £3.33m and converted more than £10m into equity.

In the annual report, Jones says the results do contain "some significant developments which bode well for the future".

Thomas officially stepped down as chairman on 1 January 2019 and was replaced by Jones.

This means the Blues did record an accounting profit for the financial year of £2.29m in a season where they were crowned Challenge Cup winners in May 2018.

The operating loss before interest, tax, depreciation and amortization was almost £1.3m compared to £976,000 in 2017.

"The financial results for the 2018 year do not make pleasant reading but do contain some significant developments which bode well for the future," Jones wrote in the annual report.

"The company has undertaken a capital restructuring as part of the broader changes to the organisation of Welsh professional rugby.

"Our three benefactors Peter Thomas, Paul Bailey and Martyn Ryan have compromised on the company's financial obligations to them and have significantly reduced the amounts owed to them.

"This is an act of extraordinary generosity."

"Dialogue with Cardiff Athletic Club continues to progress and while green shoots can not quite be seen yet there there is lots of positive activity going on just below the surface," wrote Holland.

In February 2018, the Blues said they were considering moving from their Arms Park home with no deal agreed past the current agreement that finishes in 2022.

The annual report also revealed the Blues were paying a lease of £412,661 at the Arms Park and almost £1.7m to the Vale of Glamorgan where their training facilities are based.