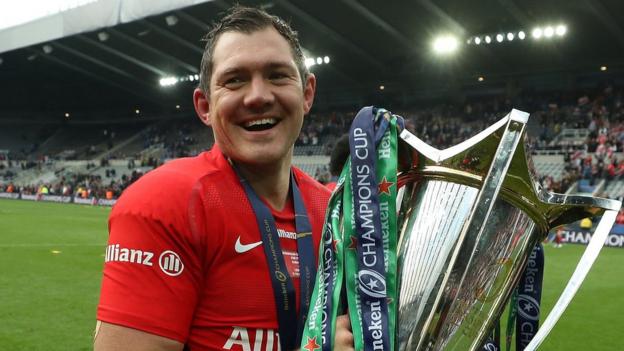 Alex Goode was named European Player of the Year after helping Saracens win a third Champions Cup in four years.

Mark McCall's side came from 10-0 down to beat holders and four-time champions Leinster 20-10 and regain the trophy.

"It's a special team," Goode told the BBC. "The second half was our best performance in any game I've known."

"It's the only club I've ever known and it means so much to me to win with Sarries."

Saracens won their first Champions Cup in 2016 with a 21-9 win over Racing 92 and defended their title the following season with a 28-17 victory over Clermont.

Goode, who celebrated his 31st birthday on Tuesday, has been repeatedly overlooked by England head coach Eddie Jones and last represented his country in 2016.

England World Cup winner Matt Dawson, speaking on BBC Radio 5 Live, said: "Alex Goode has had a number of super seasons but it's been to Saracens' benefit him not playing for England because he's always around the squad and is one of the senior players."

On Thursday Danny Cipriani, who has only made two England appearances under Jones, won the Rugby Players' Association Player of the Year award.