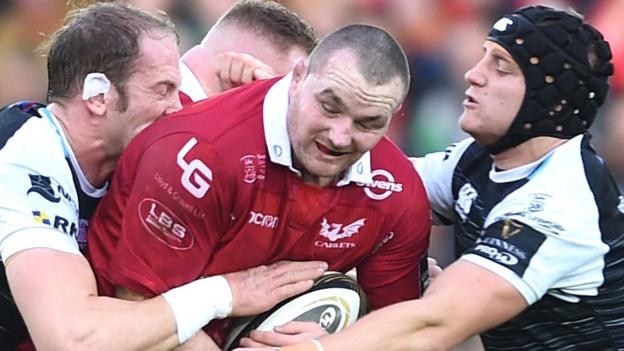 Ospreys will host Scarlets on Saturday, 18 May for a place in next season's European Champions Cup after Saracens beat Leinster to the 2018-19 title.

The Pro14 play-off between the west Wales rivals was confirmed as the English Premiership club beat Ireland's flag-bearers 20-10 in Newcastle.

The 10th Welshman to earn a winners' medal was Leigh Halfpenny, who helped Toulon as they beat Clermont Auvergne to the crown in 2015.

Halfpenny and Davies will now be hoping Scarlets can give them the chance to play in next season's European top tier.

Concluding the season's Pro14 business next weekend will also be welcomed by the Wales management.

Warren Gatland's preparations for the 2019 World Cup in Japan could have been affected by any delay.

The 42-man training squad will report for duty four weeks after playing their final matches of the domestic season.

That will now be 27 May for Dragons and Blues players, and 18 June for Ospreys and Scarlets.