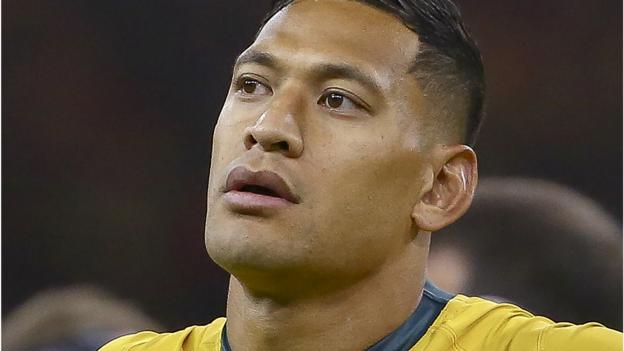 Australian full-back Israel Folau says he resisted opportunities to make his situation "a little bit easier" and return to playing because it would be doing "Satan's" work.

The 30-year-old had his four-year RA contract terminated in April.

However, he requested a hearing which will decide if his sacking stands.

Folau was speaking to his church congregation in Sydney on Sunday.

"There have been many opportunities to potentially make the situation a little bit easier," said the fundamentalist Christian.

"I could go back and play the game, get everything back to the way it used to be.

"The way Satan works is he offers you stuff that could look good to the eye and makes you feel comfortable, and if you go down that path all the worries and troubles will go away.

"It is always the will of God that comes first."

Folau - who won 73 international caps - lost his sponsorship deal with sportswear brand Asics last week, the second sponsor to have cut ties with him after Land Rover withdrew a car issued to him.

The three-person panel which presided over Folau's hearing will now take written submissions from the player and RA before deciding what sanction he will face.