Saracens win Champions Cup: What lies ahead for Mark McCall 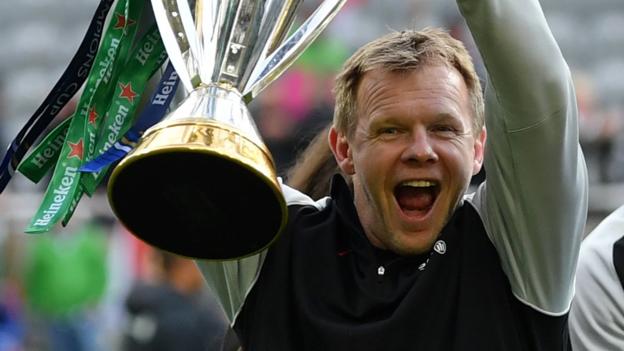 He's one of the most successful coaches in English rugby history - but Mark McCall remains something of an enigma.

Saracens' Champions Cup victory over Leinster was their third European title in four seasons, making it seven major trophies for McCall since he took charge of the club in 2010.

Known as the 'Silent Assassin' by his players, former Ireland centre McCall is a leader happy in the shadows. But why is the Northern Irishman rarely discussed when it comes to a major international role?

With England looking for a new coach post-Eddie Jones, should McCall's name be in the frame? And would he even want it?

CJ: I don't really get why he's not considered one of the greatest coaches in rugby. Surely if you're the RFU you've got to be thinking this is a man who knows the players, knows the system, knows the pathways, has a great record in one-off games and he deals with all that tension and expectation.

CJ: I don't know if he'd want to be the England coach. Unlike loads of coaches out there he never talks about himself, ever. You can't get him talking about his background, his playing career, his hopes or ambitions, anything. It's not about him, it's about the players. We don't know whether he has 'higher' ambitions and wants to coach international rugby. But the contract extension he signed to stay at Allianz Park until at least 2022 would suggest not.

JG: He's a quiet guy but he's also very relaxed around the camp. But when he gets into the rugby side of things he's a very intense man and it's true we call him the 'Silent Assassin'. He's probably the most competitive person I've ever come across and that's infectious for us. He's very clever as well in terms of the messages he gives to the group and he's loved by every single person in that squad.

UM: It's a shame that we even have to ask the question of whether he'd want to coach at the highest level with England. For as big a job as it is, and the honour that comes with it, there's a lot of baggage that would make it less desirable for coaches to want to leave their successful Premiership sides.

DC: Rob Baxter has said it before, he loves being the Exeter coach. If he enjoys it and he's successful, then why can't he do that for the next 20 years? Mark McCall is the most successful coach ever, would he really want to leave? Or would he want to get five stars on the jersey and win even more Premiership titles? The players and fans love him and he's obviously doing something incredible there. If you were in his shoes would you want to leave a legacy, being the best team in England and Europe.

UM: If you look at the age demographic of this Saracens squad: Mako Vunipola, Billy Vunipola, Ben Spencer, Jamie George, Owen Farrell... this team hasn't even peaked and that's frightening for everyone. For Mark McCall, who has laid the foundations and created so much success, I think he'd want to see these guys reach their heights and I'm not sure they're aware of where they can go. It's success from top to bottom and I think he'd want to see the job through. But as for that end date, you just never know...

DC: There's so much pressure with being an international coach and if you don't perform come a World Cup, usually those coaches are shown the door. For Paul Gustard, one big thing for him coming back to club rugby at Harlequins was to work with players every day. With England, he found it hard to have a stint of six weeks to work with players and make them better but then he wouldn't see then for five months. He loves being there on the training park every day and trying to win things. Maybe that's what Mark McCall likes doing.

CJ: English rugby has tried everything with their head coach. They've tried the company man, the number two, the great former player, the big-hitting foreigner, they've never tried the best club coach in the land. But maybe Danny is bang on and it's more trouble than it's worth, and that's why it's suited to a Warren Gatland who knows all about international rugby. But it's a bit of a shame that people like Rob Baxter and Mark McCall don't seem to be in the conversation when maybe they should be.