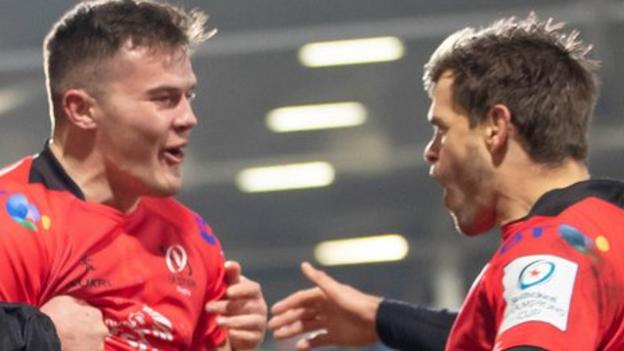 Ulster's hopes of reaching the Pro14 final have been boosted by the return of Jacob Stockdale and Louis Ludik for Friday's semi-final against Glasgow.

Ireland wing Stockdale sustained a hamstring injury last month against Edinburgh while a knee injury has kept Ludik sidelined since the end of March.

"Louis might come back into it, we'd be hopeful," said coach Dan McFarland.

"Jacob has started training as well so potentially he could play but we won't know for sure until later in the week."

Ulster were beaten narrowly by Glasgow in the 2015 Pro12 semi-final at Scotstoun and also lost the 2013 decider to Leinster.

After a very poor 2017/2018 campaign, they have already exceeded expectations by reaching the knockout stages of both the Champions Cup and Pro14 competitions, beating Connacht two weeks ago in a knockout quarter-final game at Kingspan Stadium.

"We're treating it as an opportunity to play against a quality side and are confident in the work we've done this week, but understanding it's a difficult task," said head coach McFarland.

"It's what you want to be doing. We could be on our sun loungers now, but we're playing play-off rugby which is brilliant."

Marshall made ultimate 'sacrifice' for Ulster

Luke Marshall's form since returning from serious injury has impressed the coaching staff, with the 28-year-old playing a starring role in the last four games.

He damaged his ACL in the Champions Cup play-off win against the Ospreys last May, which helped secure Champions Cup qualification for this season, but has hit the ground running since his return in the quarter-final loss to Leinster in Dublin at the end of March.

"Luke is an understated fella but you can't understate what he offers for the team," says McFarland.

"There's an essence about him that just says 'Ulster Rugby'.

"I remember when I was following the guys at the end of the season he did his ACL making a tackle that was absolutely pivotal in the corner chasing across.

"Three fellas smashed the Ospreys player into touch and he did his ACL.

"It was a sacrifice on his part that had that 'every inch' attitude that I love in the guys so much.

"When he comes back he offers that, he gives everything and when you add that to the quality with which he plays, it's a potent combination."

If Stockdale and Ludik return to face Glasgow as expected, McFarland hopes they can make the same instant impact that Marshall has made in recent games.

"It's one of the things that has changed in rugby over the last 10 years," he says.

"There are a lot of times when players get injured and take a period time, but they're used to coming straight back into the team. Obviously the more experience they get, the better they are at that.

"The days of saying 'well he's been out for six weeks and he needs two weeks playing at a lower level before he comes back in', they've gone."