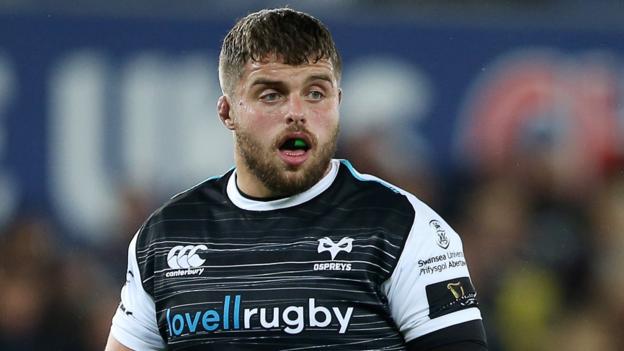 Wales prop Nicky Smith has signed a new four-year deal to stay at Ospreys until at least 2023.

The 25-year-old loose-head has spent all his professional career at Liberty Stadium after making his debut in 2013.

Smith has turned down interest from Cardiff Blues and Sale Sharks after helping Wales win the 2019 Grand Slam.

"I know it's dragged out probably longer than I was hoping, but I'm just happy that I've committed my future to my home region" said Smith.

"It was always going to be Ospreys and Wales for me, I'm just happy that we've got the right deal and I'm looking forward to the next four years.

"It's been a good season personally, but there's always room for improvement and I know there's a lot I can work on so over these four years I can hopefully become a better player."

Smith has made 106 Ospreys appearances and played in four of Wales' Tests during the 2019 Six Nations Grand Slam.

Head coach Allen Clarke said: "Despite being comparatively young he has become a core player and a tremendous character within the squad.

"He has shown high level consistency at the top end of the game, not just in the set-piece but also in open-play, where his contribution is very much that of a modern day loose-head prop."

Wales captain and lock Alun Wyn Jones has yet to decide on where his playing lies beyond the end of his Ospreys deal, which expires after the 2019 World Cup.

Ospreys host Scarlets on Saturday, 18 May in the Pro14 play-off when a place in the Heineken European Champions Cup next season is at stake.