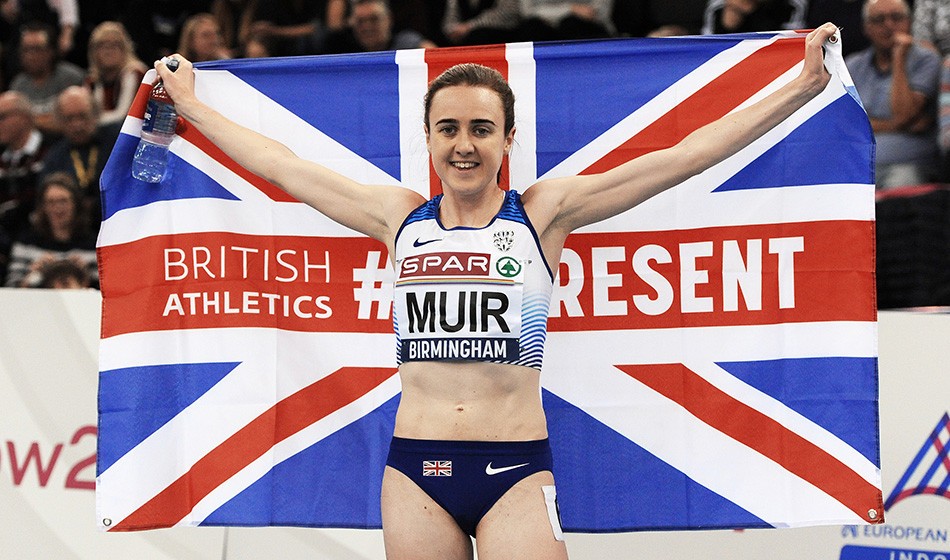 Mark Munro is neither anywhere near retirement age nor of a mind to step down any time soon – there’s far too much work to be getting on with – but, when he does eventually leave his post as Scottish Athletics chief executive in the future, he wants to do so with a blueprint for success firmly in place.

To many, athletics north of the border is a bona fide success story – a sport that is punching above its weight and having an impact made most visible by the achievements of a number of athletes who are succeeding at major championships, making Great Britain teams and breaking national records.

You certainly don’t have to look far for Scottish success at the moment – with the likes of Callum Hawkins and Steph Twell in fine form on the roads, while Chris O’Hare’s European indoor 3000m silver medal is still fresh in the memory.

The trailblazer, of course, has been Laura Muir (pictured), whose standards continue to rise alongside her medal count. There has been a lot of discussion since Glasgow 2019 about how Scotland can capitalise on her success and create a legacy that will benefit the sport long after the double double European indoor champion has hung up her spikes.

There are ambitions for the creation of new indoor training facilities, and high-profile success on the track certainly helps to strengthen the case, but Munro also has a bigger picture in mind and it’s one which involves a set-up that builds from the ground up.

“Long after we’ve gone, we want to try and leave a blueprint for success for athletics in Scotland which looks at clubs, club leaders and volunteers, coaches, athletes and officials”

Clubs, coaches, volunteers and officials – all of which make an enormous contribution to an athlete’s development – are central to the recipe for success which Munro hopes will keep the sport in rude health for years to come.

It’s a regular topic of conversation with newly-returned director of performance and coaching, Stephen Maguire.

“Stephen and I talk about this a lot,” says Munro. “Long after we’ve gone, we want to try and leave a blueprint for success for athletics in Scotland which looks at clubs, club leaders and volunteers, coaches, athletes and officials.

“If we can leave that as our legacy when we finally retire or leave and if the next people can come in, look at that blueprint and are able to say ‘that works’ and they don’t move too far from that then athletics in Scotland should be in a good place for the next decade or two.”

He adds: “In terms of our role, it’s clubs and people that are very at the heart of it. If you get that right then the sport should be in a reasonable place.

“As soon as you go off that track and pursue fashionable things then you remove yourself too far from your core business and at some point you’ll have problems.”

The task of governing a sport which can be disparate and fragmented is not an easy one, but Munro’s aim is to have everyone at least pointing in the same direction.

There is also constant work going on behind the scenes to create financial stability which allows the development of all areas without having to be reliant on walking a funding tightrope.

That’s where the job of chief executive can be a creative one. Some sponsors have been attracted, commercial partnerships struck and pursued, while the creation of an independent charitable arm is also in the planning.

“We can provide a strategy, governance, some leadership in terms of a direction of travel based on evidence but, actually, at the end of the day it’s about the clubs, the coaches, the officials and the volunteers that are actually delivering the sport week in, week out”

“Things evolve and grow and it will be interesting to see what happens post-Tokyo with the funding of the top-end athletes because I think it will be reduced, which means we’ll probably have more athletes coming out of UK funding and back into Scotland.

“That, then, puts more pressure on our system and how are we going to support those athletes?

“You can go to every major championships and not be funded by UK Athletics. Chris O’Hare, for example, has not been funded for a number of years. He’s got a great set-up in the States but how can we support him?

“That’s why we’re working really hard now because we’re thinking in two years’ time we might have to be investing money into athletes directly rather than through support services or competition.

“It might be the case that they need money to pay their rent, or whatever it is. It’s a complex task.”

And by no means does Munro think the work is done and that the problems have been solved. Neither is he labouring under the misconception that he can please all of the people all of the time.

“Everyone’s got an opinion but you have to listen and then try and make the right judgment call,” he says. “It’s important that you make them feel involved, because it is their sport.

“We can provide a strategy, governance, some leadership in terms of a direction of travel based on evidence but, actually, at the end of the day it’s about the clubs, the coaches, the officials and the volunteers that are actually delivering the sport week in, week out.”

He adds: “We’re doing okay but we could do better – that’s my school report card. We’re far from perfect but I think the strategy is right – it’s just about delivering it and making it happen.”