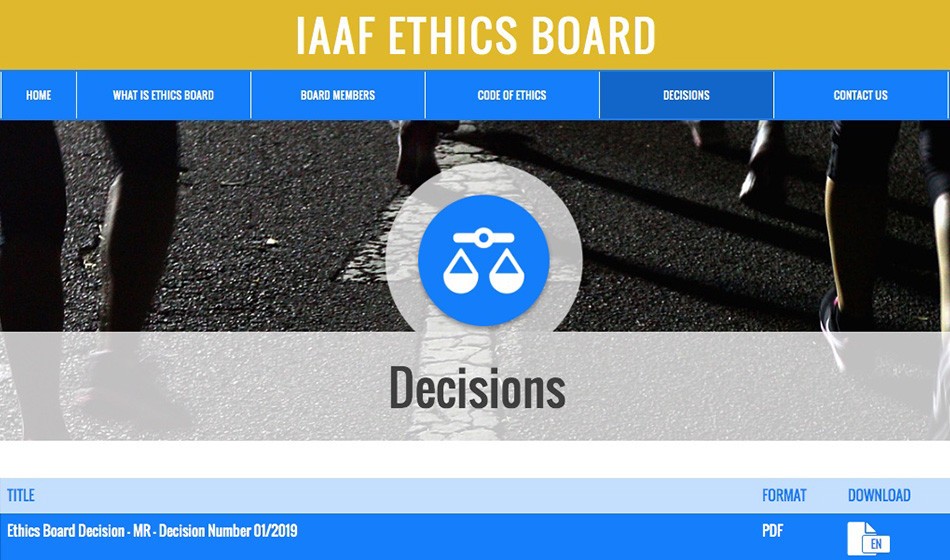 The head coach of Kenya’s Rio 2016 Olympic Games athletics team, Major Michael Rotich, has been banned for 10 years by the IAAF ethics board.

A panel of the board found that Major Rotich “sought to undermine anti-doping controls and to obtain a personal financial benefit in doing so”, adding that his conduct had been “dishonest and corrupt”.

An IAAF ethics board decision document reads in part: “This decision concerns allegations that the Defendant, Major Michael Rotich, agreed to provide advance notice of drug tests to athletes and/or coaches in exchange for money.

“The allegation is that he knew when doing so that this would allow athletes to flush banned substances from their systems in order to circumvent doping tests.

“It is also alleged that the Defendant suggested excuses which athletes could use to avoid being penalised for missing a drug test.”

It adds: “At all relevant times, Major Rotich was the Head of Athletics Kenya North Rift Province and he was the Head Coach of the Kenyan Athletics team for the Olympic Games in Rio de Janeiro held from 5 – 21 August 2016.”

The IAAF ethics board decision document, which includes further details of the Sunday Times investigation, can be downloaded here.

“In January 2016, George Arbuthnott and David Collins, two undercover reporters from the Sunday Times, met Joseph Mwangi and Major Rotich in Kenya,” reads the decision document in part. “The journalists purported to be the sports manager and coach of a fictional team of British athletes. Mr Mwangi offered to sell the reporters the banned substance EPO for use by their athletes.

“The reporters met with Major Rotich on 21 January 2016, 22 January 2016 and 21 February 2016. During those meetings, which were secretly filmed, the reporters explained that they planned to dope eight British athletes with EPO and asked Major Rotich’s assistance to protect their athletes from testing.”

While the IAAF ethics board panel noted that there is no evidence that Major Rotich provided advance notice of doping tests to specific athletes, or that any payments actually changed hands, it found that he “acted corruptly and in deliberate violation of core principles of the Code (IAAF Code of Ethics).”

According to the decision document, when Major Rotich was confronted with the footage by the reporters “the (Sunday Times) article claims that he said he had gone along with the interview because he was investigating the reporters and Mr Mwangi because he wished to protect his athletes”.

Major Rotich has a right of appeal against the decision to the Court of Arbitration for Sport.

Kirwa, who was born in Kenya but switched allegiance to compete for Bahrain, secured silver in Rio after clocking 2:24:13 behind winner Jemima Sumgong of Kenya, who has since been banned following a positive test for EPO.