Whom should you root for in the Stanley Cup Final? 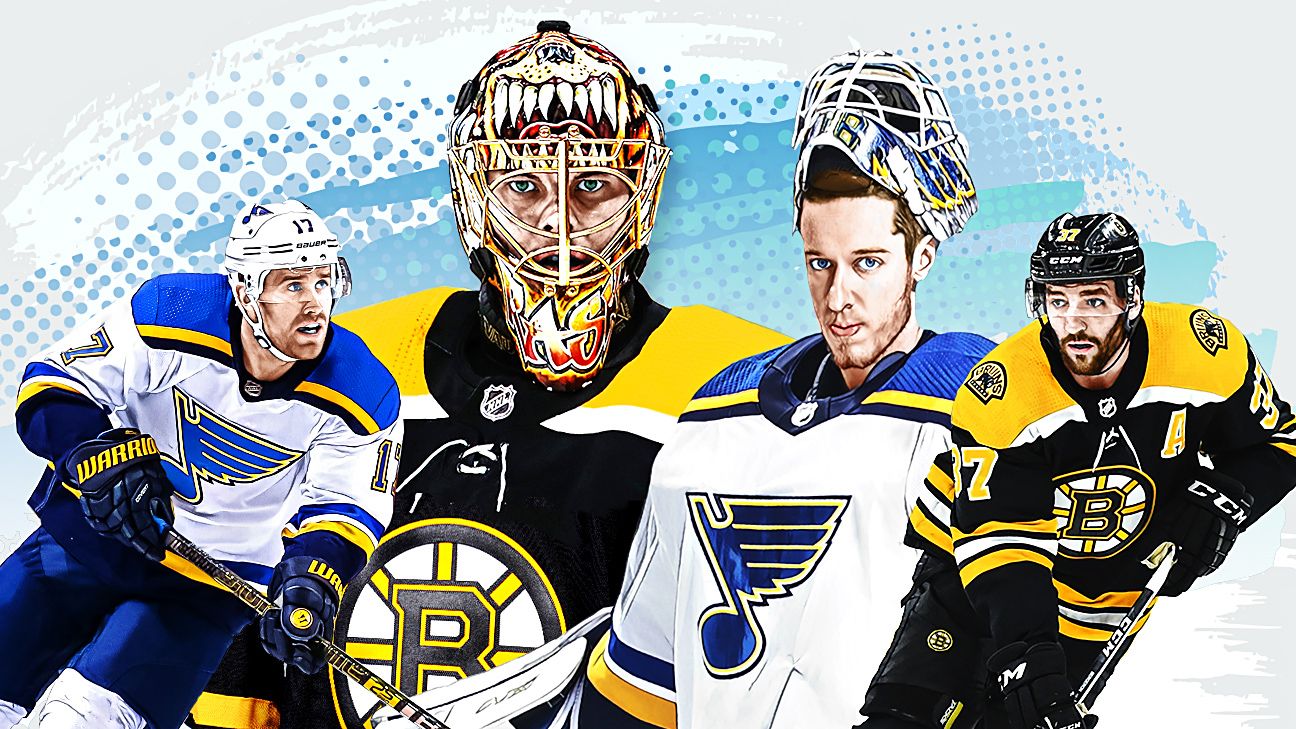 The Boston Bruins and the St. Louis Blues aren't just two well-matched teams meeting in the Stanley Cup Final. They're two teams with a collection of storylines that could elevate this series into an instant classic.

Haven't been paying too much attention? Was your team already knocked out? We'll help you decide whether to root for the Blues or the Bruins, with a look at all the sweeping narratives and overlooked angles in this championship round matchup, which begins Monday night in Boston.

The Blues entered the NHL in 1967. They emerged from their expansion team-laden conference in three straight seasons to play for the Stanley Cup, losing twice to Montreal and once to Boston, all of them in sweeps. (The Blues are the only team to appear in multiple Stanley Cup Finals and not win a single game.) But after 1970 ... nothing. They made the conference final three times over the next 48 years, before finally advancing to the Final again this season. To say generations of Blues fans have been waiting for this moment is not an overstatement.

On New Year's Day, the Blues were tied with the Ottawa Senators for the lowest point total in the NHL standings. The reversal of those fortunes -- thanks to a new coach in Craig Berube, a hot goalie in Jordan Binnington and better team chemistry -- was one of the most unexpected stories of the season. The Blues are the fourth team in the expansion era to have reached the Final after ranking among the bottom three in the standings at any point after their 20th game. Only the 1968 Canadiens went on to win the Stanley Cup, for what it's worth.

The late Laura Branigan's 1982 pop classic "Gloria" has become synonymous with this Blues team since they adopted it as their victory song. It started when a few players were in a bar in Philadelphia, watching the NFC wild-card game between the Eagles and Bears, and the DJ kept spinning "Gloria" during the ad breaks. The players decided to make the ear worm their victory song. It's now heard in the arena after victories (and well into the evening), on radio stations during 24-hour stunts, blaring from cars in St. Louis and inside the head of center Ryan O'Reilly. "It's our anthem here," he said. "It's so cool how it's brought the team and the fans that much closer."

David Backes is back

In 2016, Backes left the Blues as a free agent for the Bruins, having played in St. Louis for 10 seasons and having served as captain for half of that tenure. He's chasing his first Stanley Cup in the same series as his former team, and teammates, are chasing theirs. Will friendships, like the one Backes has with current captain Alex Pietrangelo, be tested? "I told him I love him now and will love him after, but I'm going to hate him for the next three weeks here. That's a mutual decision; we're going to battle our butts off for this ultimate prize and we'll patch up whatever needs to be patched up afterwards," Backes said Wednesday.

The 25-year-old rookie goalie sensation, who helped resurrect the Blues' season and earned a Calder Trophy nomination it the process, lingered in the AHL for nearly six years before finally getting his shot at the Blues' crease. That included a 28-game stint with the Providence Bruins in 2017-18, where St. Louis loaned him after Binnington told the Blues he would not report to an ECHL team. Among his teammates: Current Bruins Connor Clifton and Matt Grzelcyk.

The Blues love to dictate terms to opponents via their forecheck, which can take over games when it's working. Like, for example, the majority of their final three games against the San Jose Sharks, when the Blues outscored them 12-2 and absolutely dominated them for great stretches of those wins. (The Sharks' injuries obviously played a role in that, too.)

Winning for everyone else

Besides one another and the Blues' long-suffering fans, there are plenty of other people St. Louis players are battling for in the Stanley Cup Final. There's Laila Anderson, the young girl with a rare disease called HLH, whose indelible presence at Blues games in the Western Conference finals was touching. There's Charles Glenn, their anthem singer retiring because of multiple sclerosis, whose stint has been extended by three rounds already. Then there are the many Blues alumni who still live in St. Louis and are around the team, from tough guy Kelly Chase, who was openly weeping after Game 6, to Bob Plager, an original Blues player who has been waiting over 50 years for "his parade."

As recently as this season, there was a faction of Bruins fans that didn't trust Boston goalie Tuukka Rask in big games; the distrust probably began when he was in net as the Bruins blew a 3-0 series lead against the Philadelphia Flyers in 2010; never mind that he played tremendously in the 2013 Stanley Cup Final run and then won a Vezina Trophy in 2014. Rask has been the hottest goalie in these playoffs, especially in games when Boston has a chance to eliminate opponents. He has gone 3-0 in those contests, stopping 95 of 96 shots (.990 save percentage).

One last squeeze for this core

Five regulars remain from the 2011 Cup-winning Bruins roster: Patrice Bergeron, Zdeno Chara, David Krejci, Brad Marchand and Rask. Bergeron is probably going down as one of the greatest Bruins of all time. Ditto Chara, who at 42 is already a legend. Boston did a masterful job of retooling on the fly to get one more quality shot for this group, though let's note Rask and Krejci are under contract through 2020-21, Bergeron through 2021-22, and opponents are stuck seeing Marchand in a B's uniform until 2025.

The city that won't stop winning

The Celtics blew Boston's chance to hit a City Slam (winning titles in all four major sports, consecutively), but don't let that obscure the fact that Boston teams have been obnoxiously good lately. A Bruins win would mean 13 championships in 18 years for the city. But hey, at least the folks there are aware of how ridiculous this run has been.

We know the NHL is a copycat league (what league isn't a copycat league these days?). That means other general managers might try to emulate Boston's winning formula next season. One thing GM Don Sweeney did exceptionally well: hit on two middle-six forwards at the trade deadline. Charlie Coyle and Marcus Johansson have been excellent for the Bruins. Perhaps at the 2020 deadline we'll see GMs of contenders not swing for the buzziest names, but instead try to land top-end forwards who would be better suited playing a role deeper in the lineup.

We admit, this will only be a storyline until, at most, the first period of Game 2. But the Bruins will have had 10 days between games, and recent history suggests that's not always an advantage. Look at the strange trend in the East this postseason, where teams who swept one round got swept in the next round. The Vegas Golden Knights had a week off before last year's Final, then looked flat against the Washington Capitals in the early going.

A red-hot power play isn't a requirement for winning the Stanley Cup -- the Bruins' playoff power play in 2011 was actually not very good at all, hitting at about 11 percent -- but it sure strikes fear in an opponent. The 2019 playoff Bruins have a historically good power play. They're at 34 percent through 17 games; only one team has played at least 15 playoff games and did better: the 1981 New York Islanders (37.8 percent).

Hey, it's not all that different than the Blues, but one of the reasons Boston has advanced this far is because all four lines are clicking. Nineteen different Bruins have scored this postseason. The uber-talented top line of Bergeron, Marchand and David Pastrnak has scored 22 of the team's 57 goals, but there were times other players carried the team (especially earlier in the playoffs, when the top line wasn't together, and certainly not playing the way it is now).