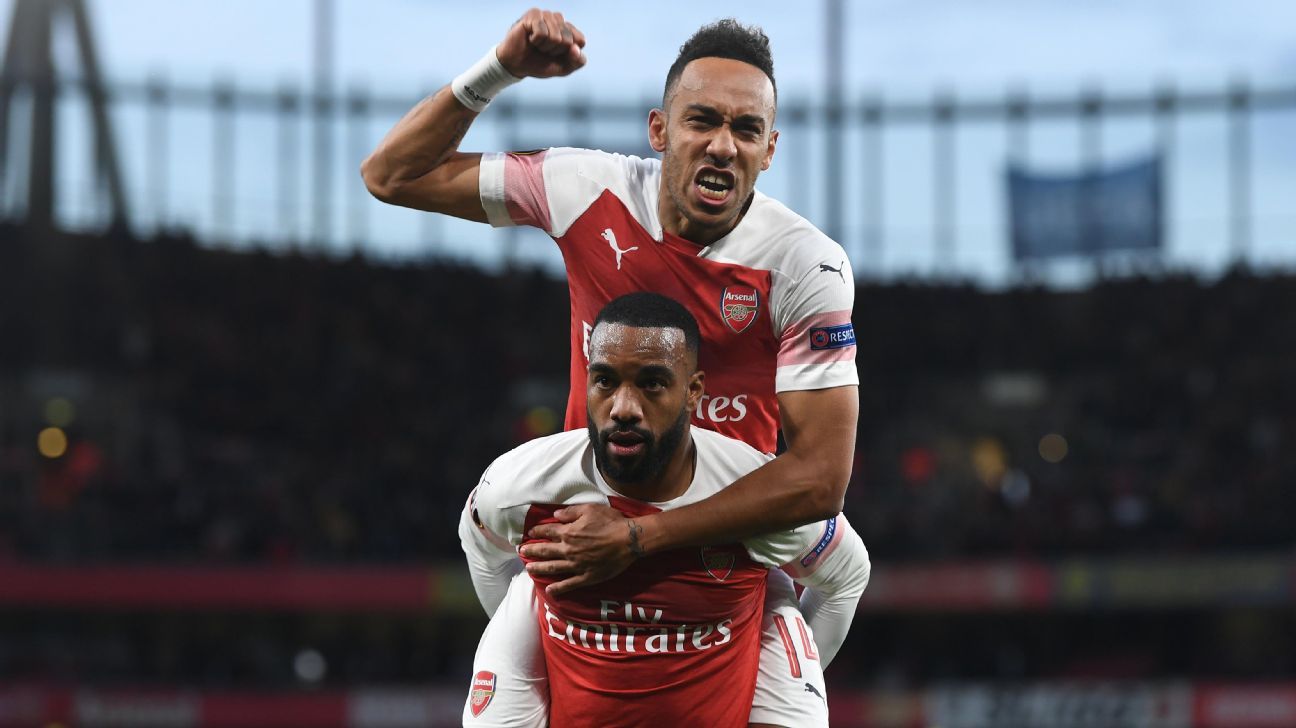 The pair had been rivals for many years. First competing for the Ligue 1 Golden Boot award, but also for a few seasons as part of one of the biggest derbies in French football, Lyon vs. Saint-Etienne. It was Pierre-Emerick Aubameyang vs. Alexandre Lacazette or Lacazette vs. Aubameyang. Opponents first and foremost, but also nice to each other when together off the pitch.

"There has always been a lot of respect between us," Lacazette said.

After all those years of playing against each other, they are finally playing for each other at Arsenal -- and they are a large reason why the Gunners are preparing for the Europa League final in Baku on Wednesday night.

This season, Unai Emery has found the right way to make them perform up front together. At the start of the campaign, the manager was keen for the Gabon international to play wide on the left, with the Frenchman on his own up front. Little by little, Emery has worked things out to find the right tactical structure that allows them to line up next to each other in and around the box.

Emery's 3-4-1-2 formation became really efficient at the turn of the year. Since Jan. 1, Lacazette has 11 goals and five assists in all competitions, with 16 goals and four assists for Aubameyang over the same span. In total, they have 50 goals in all competitions between them. When Arsenal faced their toughest opponents -- Napoli in the quarterfinals and Valencia in the semifinals -- the duo virtually knocked both sides out by themselves.

The off-field element is crucial to their partnership, as well. Being around those two is a joy. You can hear them laugh from afar at each other's jokes ... or at each other's expense. They are always planning things or cracking jokes. Their amusing celebration at Mestalla against Valencia during the Europa League semifinal second leg was prepared before the match. The atmosphere was hot in the stadium and they could not wait to cool it down with a goal. So once they scored, they pretended to be chilly on the pitch like if they had put the air con on!

"They are always laughing," said Matteo Guendouzi, a midfielder they've both taken under their wings. "You can see how natural their relationship is. They are great friends off the pitch and understand each other so well on the pitch. They complement each other well."

Lacazette is the one who likes dropping deeper and taking part in the buildup play. He has all the attributes to be a second striker. Aubameyang likes to run in behind, playing on the shoulder of the last defender.

At 27, Lacazette is a bit younger (Aubameyang will turn 30 next month), and Lacazette also is a bit shorter (5-foot-7 versus 6-foot-1), but he can do things with the ball that Aubameyang can't. They now find each other on the pitch with their eyes virtually closed, as we saw against Valencia. Of Lacazette's 11 this season in all competitions, five have been for his strike partner. Going the other way, Aubameyang has set up three goals for his best friend at Arsenal.

Their rapport extends to social media too: Most of Aubameyang's recent posts on Instagram contain Lacazette! Although they don't mix too much of their private lives, they are inseparable whenever they're on Arsenal duty. They're never far from each other on the plane, at the hotel or in the dressing room.

"It's like they are two brothers," Guendouzi said. "They are perfect for each other. They tease people a lot, they are always in good spirits and they bring so much to the team with their attitude. They also deliver on the pitch, as well."

With Wednesday's Europa League final, the pair are one step from greatness and achieving something that some of the greatest strike partnerships in Arsenal history, like Thierry Henry and Dennis Bergkamp, failed to do: bring back a European trophy to North London.

"It has been too long since 1994," said Lacazette, referencing the year Arsenal won their last -- and only -- major trophy outside England. "We want it to be our turn now, and we both want to help the team [get there]."