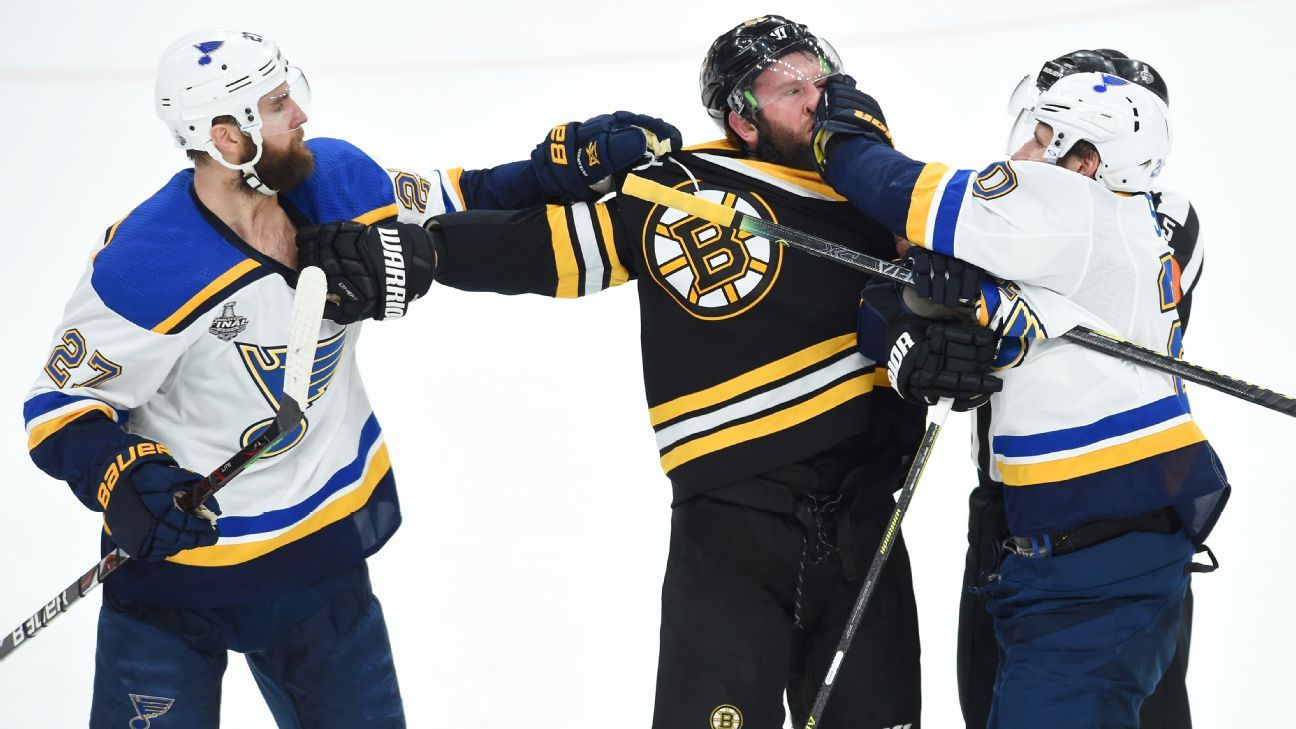 Game 3 of the Stanley Cup Final is scheduled for Saturday night between the Boston Bruins and the St. Louis Blues at Enterprise Center, with the series tied 1-1. What can we expect when the action shifts to St. Louis? Here's a little primer in today's Stanley Cup Playoffs Daily.

Blues fans have waited 49 years for this. What's that going to be like?

There are two ways to look at the Blues returning home for the franchise's first Stanley Cup Final game since 1970. The first is off the ice. The community is Blues-mad right now, and these players are hearing and seeing and feeling it wherever they go. "It's every day. Neighbors, friends. But we're in our own bubble here. Most of us are going to the rink, going home, getting rest. But the city's going crazy around us," said defenseman Alex Pietrangelo.

Is that motivation, or distraction?

The second is the on-ice question. The atmosphere in the arena is going to be chaotic. The first period at home has always been kind to the Blues, as they average 1.22 goals in the first. But how these emotions will play out through the entirety of Game 3 -- do the highs get too high and the lows get too low? -- is anyone's guess.

"We talked about that a lot. Both rinks, keeping your emotions in check. That's going to be important, and that's going to be great for the city and the fans. We're excited for them, obviously us too, but waiting a long time for that game, and it's going to be exciting," said coach Craig Berube.

Is that motivation, or tension?

Are the Bruins worried about the crowd?

At the very least, Brad Marchand isn't. "Every arena has roughly the same amount of people. So regardless of where you are in the NHL in the playoffs, you expect it to be loud. I expect the same tomorrow. I'm not overly concerned about the fans. I'm more concerned about the game," he said.

What do the Blues do with Oskar Sundqvist suspended for Game 3?

The fourth-line center got a one-game suspension from the Department of Player Safety for his hit from behind on Matt Grzelcyk. It was one of those suspensions that probably doesn't happen if he was called for a major penalty during Game 2, but the lack of that call and the injury to Grzelcyk added up to supplemental discipline.

How do the Blues handle his absence? It would appear that center Zach Sanford will draw in for the first time since Game 3 of the first round against Winnipeg. "He hasn't played for a while, since the first round. He's been staying positive, which is a great thing. But he's going to do great for us. Fresh legs. He'll bring some physicality. I'm sure he's excited," said fellow fourth-line forward Ivan Barbashev.

Sanford also grew up a Bruins fan. "It's a little weird playing against your team growing up. I was even talking to my mom. She was at the games in Boston, and she caught herself cheering for the Bruins here and there and had to fix that. It's pretty crazy how things work out like that, but I'm excited, like I said before, and it should be fun," he said.

Are there other changes to the Blues' lineup?

To be fair, Berube didn't confirm Sanford was in, although everyone else did. He left open the possibility that Robert Thomas could return to the lineup after missing Game 2, but that's hard to conceive given how many practices he's missed with lingering injuries.

On defense, Berube said Vince Dunn is "getting close. I don't know if he's an option tomorrow. I'll know that tomorrow." Dunn hasn't played since taking a puck to the face in Game 3 of the Western Conference final, but he did speak to the media for the first time in quite a while on Friday, so he's close.

As it stands, the Blues had a different look on the back end with Game 2 "guaran-pee" goal-scorer Carl Gunnarsson paired with Alex Pietrangelo, while an ineffective Joel Edmundson was dropped to the third pairing with Robert Bortuzzo. Assistant coach Mike Van Ryn has moved these pairings around a bit during the postseason.

"Yeah, it's the way we've been doing it all playoffs. I think Gunny had a great game last game, so might as well toss him up with Petro. When me and [Bortuzzo] were together, we played well, so it doesn't really matter who we're with; it could get switched midgame again. I'm excited to play with [Bortuzzo] again," said Edmundson.

In this excerpt of Quest for the Stanley Cup on ESPN+, head into the locker room after Carl Gunnarsson scored the OT winner for the Blues in Game 2.

How are the Bruins handling Grzelcyk's absence?

John Moore, who last played in Game 4 against the Carolina Hurricanes, draws in to partner with Connor Clifton, as Grzelcyk didn't make the trip to St. Louis. "I really hoped that Gryz was still here and that I wasn't even talking to you guys," said Moore. "It's terrible to see a teammate go down like that. We can certainly draw inspiration from that. He's such a tough guy, he's been getting the job done all year. For sure it lights a fire under us."

What's up with Patrice Bergeron and Vladimir Tarasenko, who both missed practice on Friday?

Both had "maintenance days," according to their coaches, which is a code word for any number of things.

Have the Blues unveiled their gluttonous food option for the Stanley Cup Final?

The Bruins' culinary team released a bacon cheeseburger sandwiched between two donuts and a bacon-wrapped hot dog covered in cheesesteak for their home games. The Blues have responded with some ridiculous food of their own, including the "big-as-your-head beef ravioli," pictured here, and some blasphemy called the lobster roll melt (chopped lobster, celery, green onions, lemon aioli, gruyere, cheddar, fontina and caramelized onions on a griddled New England roll).

It seems like the Bruins have two primary offensive concerns entering Game 3: the play of their top line, which has been held in check, and their much-heralded power play, which is 2-for-10 in the series after converting at 34 percent for the playoffs. First, what's up with the Bergeron line?

If you want to discount injuries -- and here's saying there probably are injuries to Marchand, Bergeron and David Pastrnak at this point -- then you have to credit the Blues' Colton Parayko and Alex Pietrangelo for playing that well against them, and credit their overall team defense for keeping the line from creating off the rush.

"Like any high-end players in the league, they want to carry the puck over the blue line. The more you can make them put it in and make them work to get it, that taxes them a little bit more than them carrying it in, setting up on their own. I think that's an area, as a group, that we thrive on. It's not just the defensemen, it's back pressure from the forwards. There's more to it than just the defensemen standing up and making them dump it in," said Bortuzzo.

But Cassidy says that ends in Game 3. "I know them well enough now and see how they perform in the playoffs. I know they'll eventually get to their game, and I believe it'll be [in Game 3]," he declared.

And the power play?

Blues center Ryan O'Reilly was asked about how well they've played against the Bruins' power play:

"They have elite personnel out there, but, you know, they work so well together, the way they move the puck, there are so many threats. We have to be on, and we have to be as quick as possible. If we're not working or we get tired, they're going to make us pay. It's paying attention to every little detail from the draw to making sure, if you get a chance to clear it, forcing them to have to go all the way back and having quick changes to stay fresh. It's a very good power play, and we have to stay out of the box. But when we have a chance to kill, make sure we're super-intense."

"There are so many different ways that they're coming at you, so you're going to play them a bunch of different ways. Limiting entries is the big one for our group. I think we can make them put pucks in and then have them get to set up. That takes time, and sometimes it's frustrating and it's something we build off. Being good at the blue line is big for us," said Bortuzzo.

Finally, the Bruins had Denis Leary as their celebrity hype man for the first two games of this series. Who do the Blues have?

It's a day @stlouisblues>#StanleyCup>pic.twitter.com/nT7Y0eoFLV - #StanleyCup on NBC (@NHLonNBCSports) May 31, 2019