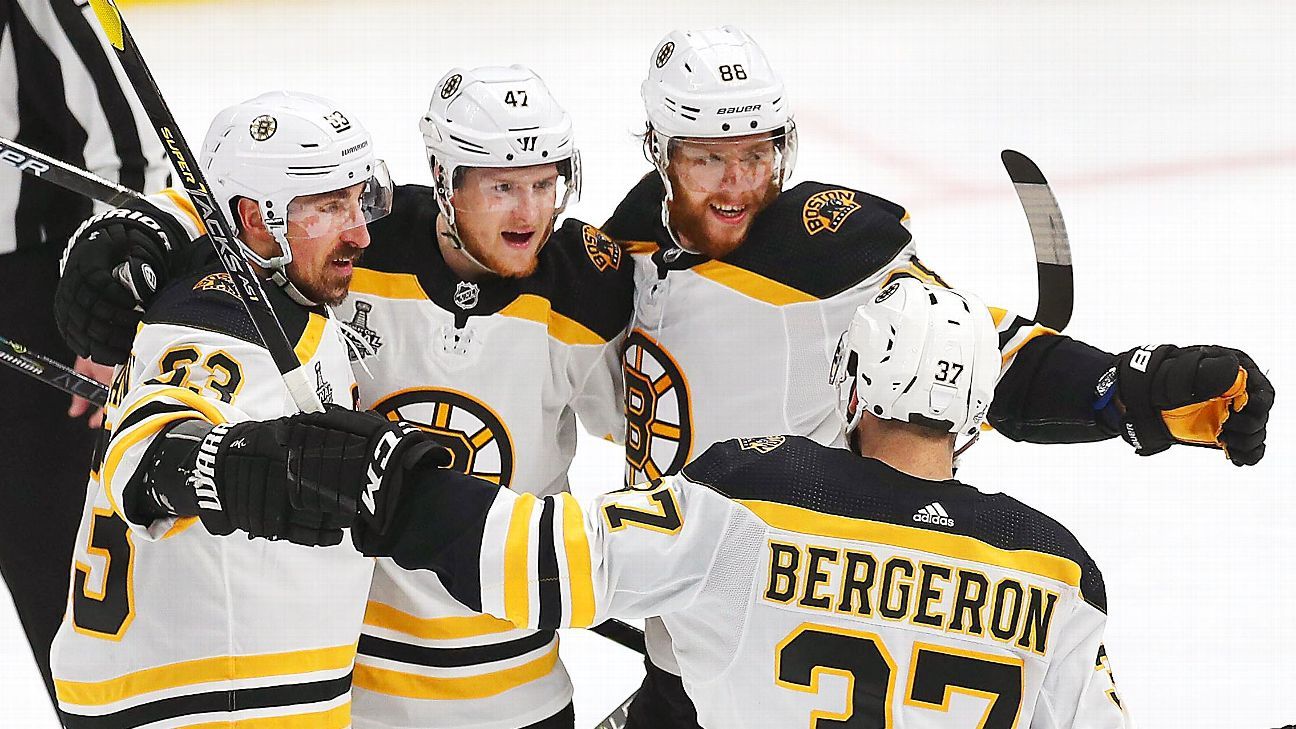 The St. Louis Blues had waited 49 years to host another Stanley Cup Final game. They will have to wait a little bit longer for a happier home memory, after the Boston Bruins blasted the Blues 7-2 in Game 3 on Saturday night to take a 2-1 series lead.

Here's everything you need to know about how Game 3 played out in this edition of ESPN Stanley Cup Playoffs Daily.

It was supposed to be a special night in St. Louis, and the crowd was dotted with celebrities like Jenna Fischer, Jon Hamm, Travis Kelce, Jackie Joyner Kersee and Patrick Mahomes. This game, however, was all about the Bruins' domination, though we'll probably also remember this as the first time Jordan Binnington was pulled in his NHL career (mercifully, after Boston's fifth goal).

Boston climbed to a 3-0 lead by the end of the first period -- the last goal, with 9.2 seconds remaining in the period, was a dagger -- and didn't look back. The Bruins' power play was absurdly efficient, going 4-for-4 ... on four shots. In the end, seven different Bruins scored. Things could have gotten out of hand late, especially as St. Louis exerted its physicality in an attempt to rile up the Bruins. The Bruins didn't bite and protected Tuukka Rask.

Meanwhile in the St. Louis room, players adamantly defended their rookie goaltender. They admitted to leaving him hanging out to dry and vowed to be better. The Blues owe it to their home fans to come out stronger in Game 4.

With a goal and three assists, Krug set a new Bruins Stanley Cup Final record for points. He was the primary beneficiary of a power play that was frighteningly efficient.

Torey Krug says it is special to become the first Boston player with a four-point game in the Stanley Cup Final.

There has been some speculation that the top-line center is playing through an injury. After scoring the first goal of the game, Bergeron silenced that talk, for now. (He also added two assists). "Watch the game tonight. Does he look hurt?" linemate Brad Marchand quipped.

Another goal, another reason to never doubt the first line. According to Natural Stat Trick, the trio of Pastrnak, Bergeron and Marchand scored three times on eight scoring chances in Game 3.

Charlie Coyle puts it up over Blues Jordan Binnington to extend the #Bruins lead#StanleyCup pic.twitter.com/x86E16Xf6h

Not sure what's prettier, the goal by Charlie Coyle or the pass by Marcus Johansson. It sure feels like Johansson, an impending unrestricted free agent, is driving up his contract price every round these playoffs.

The Blues' challenging the Bruins' third goal, which occurred with 9.2 seconds left in the first period. The dud wasn't necessarily the decision to challenge; it was a smart challenge, and we're actually still not totally convinced the play was on-sides. But when the refs rued in Boston's favor, it became a kiss of death for St. Louis.

Boston scored on the ensuing power play at the start of the second period to build a 4-0 lead. And while wild things have happened in the playoffs, let's note that in the 2018-19 season, teams went 1-252-1 after trailing by four goals.

We're not sure when it became a requirement for NFL quarterbacks attending sporting events to chug beers, but we're not complaining. Mahomes aced his opportunity:

Hey now.#Chiefs QB @PatrickMahomes in the house!
Chugged a beer.
Not sure how full it was, but still better than Rodgers. #StanleyCup pic.twitter.com/NKddIFftDC

"We could use a win. It's been a rough run for the city the last three decades or so with the odd Cardinals championship here and there and what-not. It would be nice for a million different reasons, but mostly I think for the guys on this team. When you look back, whatever it was, Jan. 2, last in the league. And to have the guts and fortitude and strength and character and the skill to come back from that, yeah, I mean, I think these guys believe. And I think the city's starting to also." -- Blues fan/actor Jon Hamm.