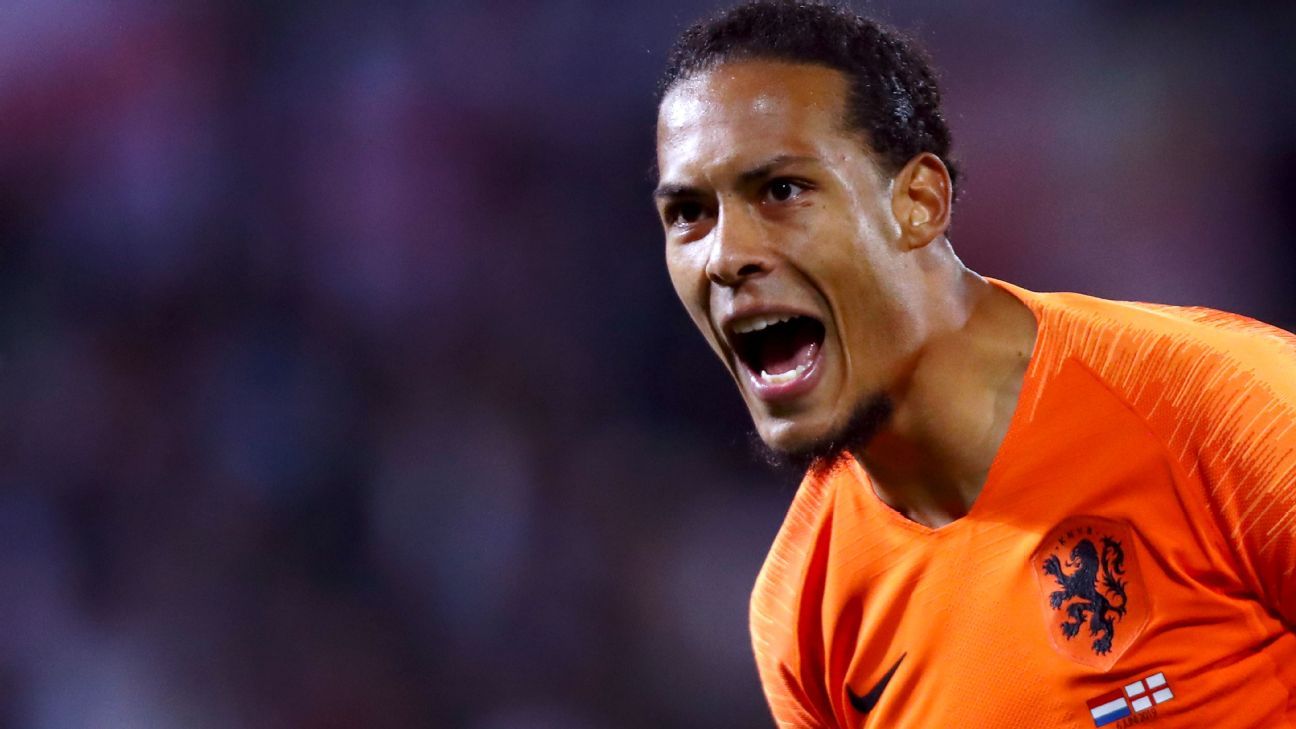 PORTO, Portugal -- Raheem Sterling looked to have cracked the Virgil van Dijk code during the closing stages of England's Nations League semifinal defeat against Netherlands in Guimaraes on Thursday.

For a split second, the England forward seemed to have broken clear of the Dutch centre-half having beaten him to the ball and gone past him near the halfway line. During the 2018-19 season, one in which Van Dijk played a pivotal role in Liverpool's Champions League triumph, no opponent was able to take him on and beat him. Not once did a player dribble past Van Dijk -- not even Lionel Messi during the epic Champions League semifinal doubleheader last month. But here was Sterling, the Football Writers' Footballer of the Year, slipping away from Van Dijk, who ended the campaign with the other individual award in English football, the PFA Player of the Year.

Yet just as Sterling appeared to have beaten his man, Van Dijk recovered and reclaimed the ball to keep his remarkable record intact.

Van Dijk has made 58 appearances for club and country this season and, with one more 90-minute match on the horizon, he has the chance to go through an entire campaign without one player being able to go past him with the ball. But that final 90 minutes before a deserved holiday happens to be the UEFA Nations League final against Portugal in Porto on Sunday -- 2:45 p.m. ET on ESPN -- and he arguably faces the biggest test of all when he goes up against Cristiano Ronaldo.

- Ogden: Ronaldo irreplaceable for Portugal
- World Cup qualifying: All you need to know
- When does the transfer window close?

Even at 34, Ronaldo remains locked in his seemingly endless battle with Messi for the distinction of being regarded as the best player on the planet. While Messi waits to take the field at this summer's Copa America with Argentina -- all of it live on ESPN+ in the U.S. -- Ronaldo's impressive hat trick against Switzerland in Wednesday's 3-1 semifinal victory highlighted his enduring ability to turn a game on its head.

Ronaldo showcased his dazzling talents against the Swiss -- his pace, trickery, power and skill on the dribble -- so Van Dijk really will face the acid test of his defensive credentials at Estadio do Dragao. But there is more at stake for Van Dijk this weekend than merely the safeguarding his record of resisting all attempts to dribble past him this season.

Eight days after lifting the European Cup with Liverpool following the Champions League final victory against Tottenham in Madrid, the 27-year-old can make it a Euro double by helping Netherlands become the first winners of the Nations League. But on a personal level, Van Dijk can also hammer out his claims to become the leading contender for this year's Ballon d'Or by keeping Ronaldo quiet on Sunday.

The race to win the Ballon d'Or is perhaps as open as it has been for over a decade but Van Dijk is firmly positioned among the front-runners and could become the first defender to claim the prize since Fabio Cannavaro received the award in 2006 after captaining Italy to World Cup success. Luka Modric broke the Ronaldo-Messi stranglehold on the award by winning in 2018, becoming the first player outside the modern game's two great icons to win the trophy since Kaka in 2007. Van Dijk is now emerging as the favourite to top the voting this year, with Netherlands coach Ronald Koeman backing his captain to claim a rare victory for a defender.

"He deserves the Ballon d'Or," Koeman said. "Everyone is often focused on players who score or create goals, or produce decisive goals. But if there is ever a moment to give the Ballon d'Or to a defender, it is now.

"Messi is the best player, but I also think you should win big trophies such as the Champions League to be in the picture for the Ballon d'Or."

Van Dijk already has the Champions League in the bag, and some would argue that he had Messi in his pocket during the semifinal second leg at Anfield, when Liverpool's remarkable 4-0 victory overturned a 3-0 first-leg defeat to send them to the final. But Ronaldo will still believe he should be the front-runner for this year's Ballon d'Or after becoming the first player to win domestic titles in England, Spain and Italy following his move to Juventus this season. The former Manchester United and Real Madrid forward is an outsider for this year's award, with Juventus stumbling at the quarterfinal stage in the Champions League, but he will do his cause no harm if he can lead Portugal to Nations League success.

Van Dijk's Liverpool teammates Sadio Mane and Mohamed Salah will also be in the frame for the Ballon d'Or, and Messi, having helped Barcelona to the La Liga title, cannot be discounted. But if he can resist Ronaldo's unique talents on Sunday and help the Dutch to victory in Porto, Van Dijk will become the favourite to win the Ballon d'Or. He has made defending look like an art form at times this season with his strength, pace and reading of the game making him a majestic figure at the back for Liverpool and Netherlands.

If Ronaldo can't beat him on Sunday, who can?

More in this category: « Ramsey has played last Arsenal match - Emery Mexico's Layun had cancerous tumor removed »
back to top