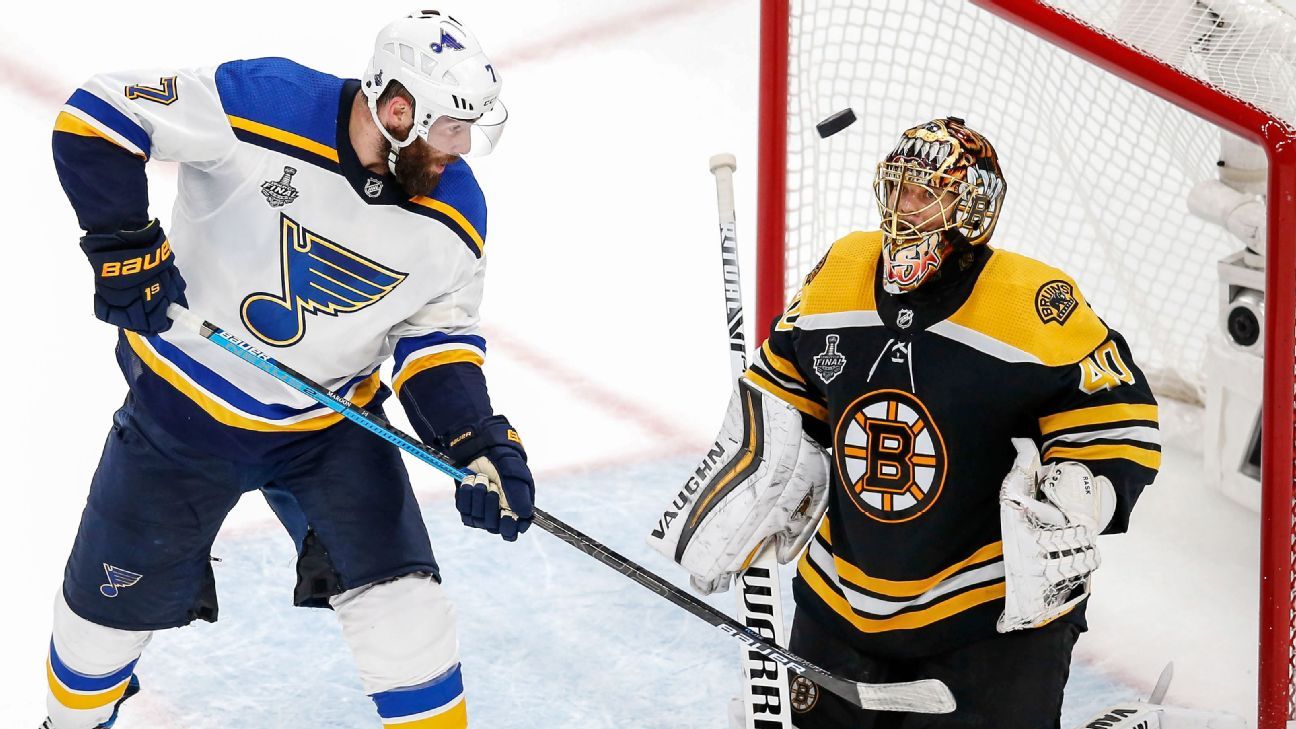 It's a Game 7 for the Boston Bruins in Boston. What do the numbers tell us about that?

Historically, this means good things. The Bruins are 6-1 all time with an opportunity to clinch the Stanley Cup. That's the best of any team in NHL history with a minimum of five chances to do so. That also includes Game 7 of their series against the Vancouver Canucks, which was the last Game 7 we've had in a Stanley Cup Final (back in 2011). Home teams are 12-4 in Game 7 of the Stanley Cup Final, however the past two home teams to host one have lost -- Vancouver to the Bruins in 2011 and the Detroit Red Wings to the Pittsburgh Penguins in 2009.

It's a Game 7 for the St. Louis Blues in Boston. What do the numbers tell us about that?

The bad news is more centered on Game 6 than Game 7. The Blues are the sixth team in Stanley Cup Final history to lose Game 6 at home after leading 3-2 in the series. Of those six, only the 1945 Toronto Maple Leafs bounced back to win the Stanley Cup. And they were some odd ducks; the Leafs had actually squandered a 3-0 series lead before recovering to hoist the chalice.

The good news is that if the Blues were going to win the Stanley Cup, it was probably going to be like this. They're 9-3 on the road, and the numbers explain why: They average 3.16 goals per game on the road vs. 2.54 at home, and they give up just 2.41 goals per game on the road vs. 3.07 at home. Ask the Blues and they'll tell you that their style of play lends itself to road success. "I think when you're at home, you're maybe trying to play a little differently at times. On the road, more of a simpler approach, I think, directness, predictability probably has a lot to do with it. We've just been a good road team for a long time. We feel pretty comfortable on the road," said coach Craig Berube.

That said, won't the Bruins be a little more comfortable, given the disparity in experience?

Sure. The Blues are the antithesis of the Bruins' experience advantage, with only Oskar Sundqvist having played on an eventual Stanley Cup championship team (the 2016 Penguins). The Bruins have a core of five players from their 2011 Stanley Cup-winning team and the 2013 team that lost in the Final: Patrice Bergeron, Brad Marchand, David Krejci, Zdeno Chara and Tuukka Rask, who was a backup to Tim Thomas in 2011 and the starter in 2013. The players on both teams have been in championship situations before, but the Bruins certainly are the ones who have tasted from the Cup, and then tasted the bitterness of not winning one.

"It's the best thing in the world for the team that wins, and it sucks for the team that loses. Being on both sides of it, you realize how hard it is, and just how s----y it is to lose. It sticks with you forever," said Marchand. "Winning and losing sticks with you forever. You don't forget everything that happens when you win, and you definitely don't forget what happens when you lose. Again, unfortunately, there's going to be both sides of that tomorrow. See how it plays out."

How good has Rask been in these situations?

In Game 7s, Rask is 3-2 all time, and the numbers aren't pretty: a 3.18 goals-against average and an .877 save percentage. But his numbers in elimination games this postseason are a different story: In wins over Toronto (twice), Columbus, Carolina and St. Louis in Game 6, Rask is 5-0 with a .973 save percentage, including a shutout against the Blue Jackets.

"He's an ultimate professional and obviously has been in the zone the last couple of months here since the playoffs have started. It gives us a lot of confidence playing in front of him," said forward Karson Kuhlman.

What can we expect from his counterpart, rookie Jordan Binnington?

Are the Blues going to have to worry about their special teams?

Oh, very much so. The Bruins' power play (32.9 percent) remains the best the NHL has seen in the playoffs since the 1981 New York Islanders. They're 7-for-21 in this series, and the power play has been a difference-maker in all three of their wins. The Blues, meanwhile, are a pathetic 1-for-18 on the power play, although they peppered Rask with 12 shots in Game 6 in going 0-for-4. Overall, Boston is outscoring the Blues 8-1 on special teams, including an empty-net goal.

What's the solution for St. Louis?

Short of declining the penalties they draw? That they aren't many in Game 7, because even when they have a power play and aren't killing one off, that means they're not rolling lines at 5-on-5 to establish their forecheck, and that's when they're at their best.

Is that feasible in a Game 7?

Potentially. There are have been 61 Game 7s in all rounds since the 2006 Stanley Cup Playoffs, aka after the canceled season and the reset button on rules changes. The average total penalty minutes in those games was 14.4, or 7.2 per team. If the Blues get that in Game 7, it would be near a tie with the penalty totals in Games 1 and 4 in this series, in which the Blues were 1-1. They were 1-2 when the penalties were more than 14 total. Incidentally, the Game 7 average has dropped recently -- since 2015, they've averaged 11.2 penalties per game in total. Let 'em play, ref!

One mystery for the Blues: Robert Thomas. The rookie returned for Game 6 after being out since Game 2, but his line was statistically the worst for the Blues that night; although, it should be said, they got only 6:37 in ice time with all those power plays. Does Berube bring Sammy Blais back up to the Tyler Bozak line with the return of Ivan Barbashev from suspension to play on their fourth line?

The Bruins are expected to go with the same lineup, which means speedy Karson Kuhlman is in and David Backes, the veteran former Blues captain, will watch his current team attempt to win the Stanley Cup against his former team from the press box. Which has to be devastating.

As physical as any in the series and likely on the low-scoring side given the acumen of the netminders in the game.

Who are the favorites for the Conn Smythe Trophy for playoff MVP?

There's a convincing case that Rask should be the MVP, win or lose for the Bruins, becoming just the fifth player in NHL history to win it in a losing cause. Goalie Jean-Sebastien Giguere of the Mighty Ducks of Anaheim was the most recent winner-as-loser, in 2003. If the Bruins win, it's certainly Rask. If the Blues win, a case could be made for Binnington, especially if he plays well for most of Game 7, but the smart money remains on Ryan O'Reilly, unless this award is truly Rask's to lose.

Thanks to ESPN Stats & Information for assistance throughout.