Morgan: 'Disrespectful' to ease up on Thailand 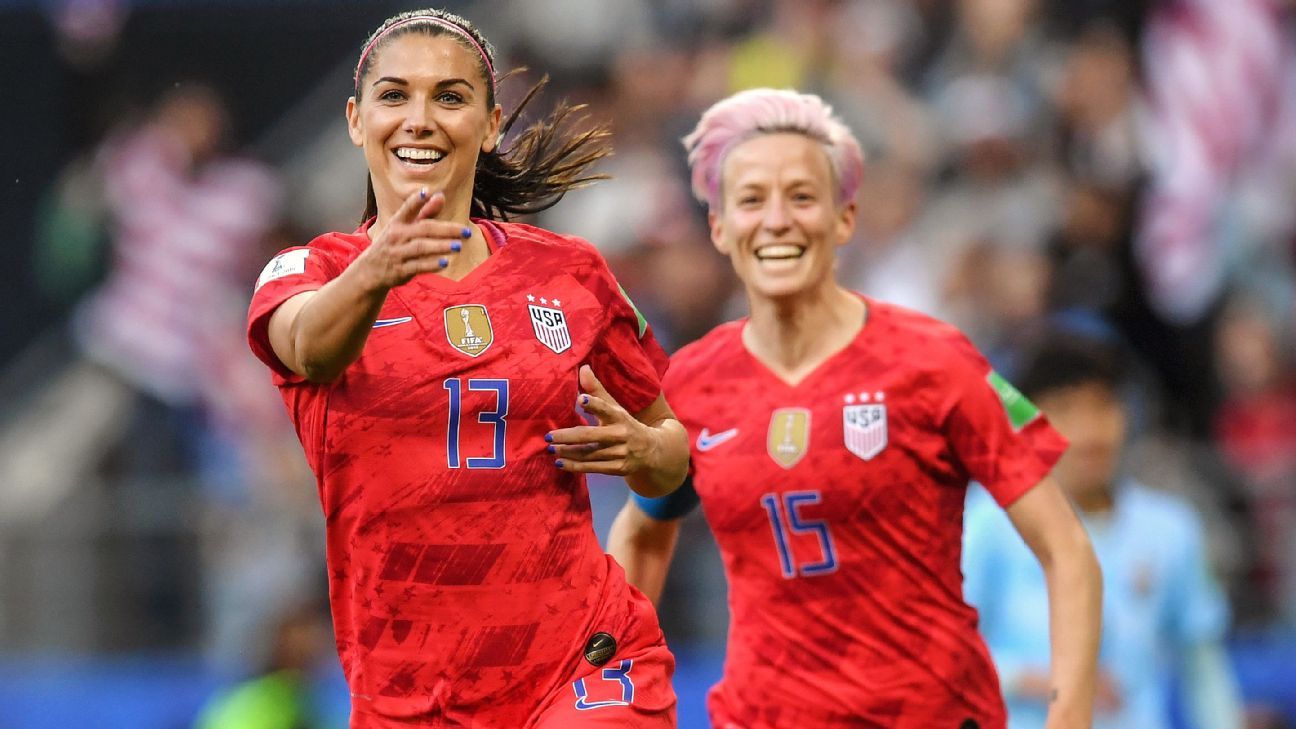 United States women's national team forward Alex Morgan has said she is happy ignoring criticism of her team's celebrations during a record-breaking 13-0 victory over Thailand in their World Cup Group F opener on Tuesday, and that it would have been "disrespectful" not to have given their all for the full 90 minutes.

Morgan tied a tournament record with five goals in the lopsided win, while Samantha Mewis and Rose Lavelle each added a pair of goals for the United States, which broke the record for goals and margin of victory in a World Cup game.

- Hays: Are we really blaming USWNT for celebrating?
- The Equalizer: Behind the scenes with Alex Morgan

The criticism has been about the team's relentless attack in the second half. After taking a 3-0 lead into halftime, the U.S. scored 10 more times in the final 45 minutes, with the players celebrating goal after goal even after the result was no longer in doubt.

"I think it's disrespectful if we don't show up and give our best and play our game for 90 minutes," Morgan said in an exclusive interview with ESPN on Wednesday morning. "It's disrespectful to the Thai team. And I believe they wanted us to play them straight up.

"And for the celebrations, these are goals we have dreamt of our entire life. I mean, I'm going to celebrate Mal Pugh's goal. I'm going to celebrate Sam Mewis and Rose Lavelle. This is their first World Cup and I'm so proud of them. And I couldn't have dreamt of scoring five goals in a World Cup. So it's incredible for us all and I'm happy just ignoring those comments."

What couldn't be ignored was Thailand's lack of resistance against the dominant Americans, who came into the tournament as favorites to retain their world title.

Thailand manager Nualphan Lamsam apologised to fans after the match.

"We met with one of the strongest opponent in the world, but I did not think we would lose this much," Lamsam said, adding that she, the coaching staff, and the players "would like to apologise to all our fans ... and thanks for all their support."

"We will do our best in the next two games," she said.

U.S. manager Jill Ellis defended her team's aggressive style of play in the second half.

"This is a world championship, so every team here has been fantastic to get to this point. And I think that to be respectful to opponents is to play hard against opponents. It's a tournament where goal differential is important," Ellis said.

"When you get a deluge of goals like that, it's a good feeling. It builds confidence."

Abby Wambach, a veteran of four World Cups and the leading goal scorer in U.S. women's soccer history with 184, also took no issue with the team's performance.

"For all that have issue with many goals: for some players this is there first World Cup goal, and they should be excited," Wambach tweeted. "Imagine it being you out there. This is your dream of playing and then scoring in a World Cup. Celebrate. Would you tell a men's team to not score or celebrate?"

The United States, which leads Group F on goal differential after the lopsided win, will next play Chile on Sunday in Paris.

Information from The Associated Press and Reuters was used in this report.