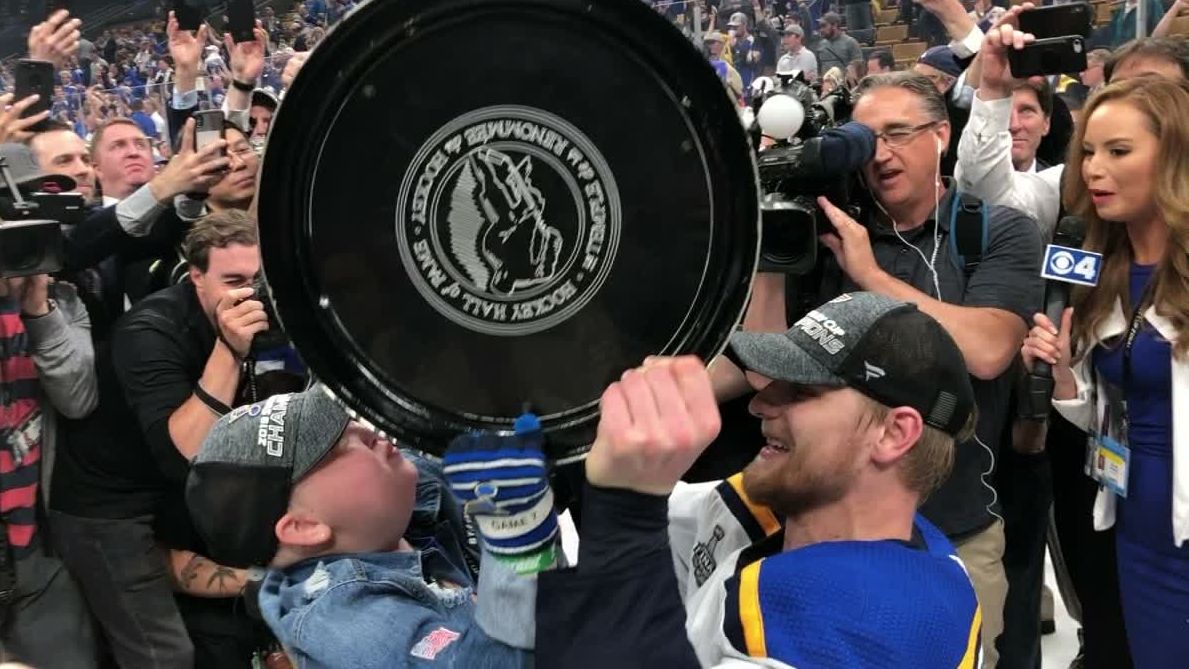 BOSTON -- Laila Anderson is only 11 years old, but she swears she has a gift: She says she can always predict who is going to score the first goal for her beloved St. Louis Blues.

Before Game 7 of the Stanley Cup Final on Wednesday, Laila told her mother, Heather, it was going to be Ryan O'Reilly.

That got her extra fired up.

"Mom," she said while standing on the ice at TD Garden, grinning after the Blues won their first Stanley Cup and O'Reilly -- after scoring the game's opening goal -- won the Conn Smythe Trophy as playoff MVP. "I called it."

Laila, who is battling a life-threatening autoimmune disease, isn't just a Blues superfan. She's the team's good luck charm -- so much so that the Blues flew her and her mother to Boston for Game 7, then invited them on the ice to celebrate with the team after its 4-1 victory.

Blues defenseman Colton Parayko, after hoisting the Cup himself, knelt onto the ice to meet Laila. She wiped away tears, then held on and kissed the trophy.

Winger Pat Maroon, a St. Louis native, lit up when he saw Laila in the crowd. "Laila!" he shouted. "We did it, princess!" Then the two posed for a photo.

Anderson has hemophagocytic lymphohistiocytosis (HLH), a disease with which only 15 other children in the world have been diagnosed. Her love of the Blues, she said, was one of the things that helped her through treatments and recovery. Many Blues players got to know Laila through team-sponsored visits to the hospital, and she formed an especially strong connection with Parayko and winger Alex Steen.

"We get to show up to the rink and be with the guys, do things like that. But you go to the hospital, and you speak with her, and you watch her go through all that stuff. I can't imagine what she's going through. What kinds of things they're putting in her body to try and help her recover," Parayko told ESPN before the Stanley Cup Final began. "She continues to have a strong attitude, a positive attitude. It's so special. We might lose a hockey game, and we're frustrated or go home really upset. But there are people out there trying to battle for their lives."

Laila's condition has limited her travel significantly. She had a bone marrow transplant in January that meant she could go only between the hospital and her house.

Then, before Game 3 of the Western Conference finals, Laila's doctors cleared her to attend. Anderson's mom broke the news in a video, which went viral. Laila then attended Games 4 and 6, and returned to the Enterprise Center when the Blues reached the Stanley Cup Final.

Then before Game 7 of the Final, Heather Anderson met with her daughter again and pressed record on her phone.

"What if I told you the Blues called, and they want you at the game?" her mom asked.

Laila looked at her mom: "What? How?"

"The doctor said it's OK," her mom said.

Laila could barely contain her tears.

"No he didn't, Mommy, no he didn't," she said breaking down, collapsing into her mom's shoulder.

"That video last night her mom posted was truly amazing," Maroon said Wednesday morning. "She's been an inspiration to all of us throughout the year. And Alex Steen has done a good job of bringing her and making her feel comfortable, Colton Parayko the same way, making her feel welcome to the team and the St. Louis Blues welcome her and her family. It's been truly amazing.

"She's a fighter and she's going to continue to fight. She's our inspiration. We look up to her, what she has to go through every single day. To get on that plane, I know the doctors are questionable of getting her out there because of her health and to say that she gets to come on the plane and travel out here to see us play, that's truly amazing. I'm so happy for her."

When asked if Laila gave the team any pointers, Maroon said: "She gives us enough, just the way she fights. Go out there and fight for her. What she has to go through every single day."

On the ice after Wednesday's victory, Laila -- wearing a jean jacket and a Blues championship cap -- was as popular as any St. Louis player. She did several media scrums. Her mom stood beside her the entire time.

"Being here for this, it's everything I imagined and more," Laila said. "I don't even know what to say. I love this team. I love them so much."