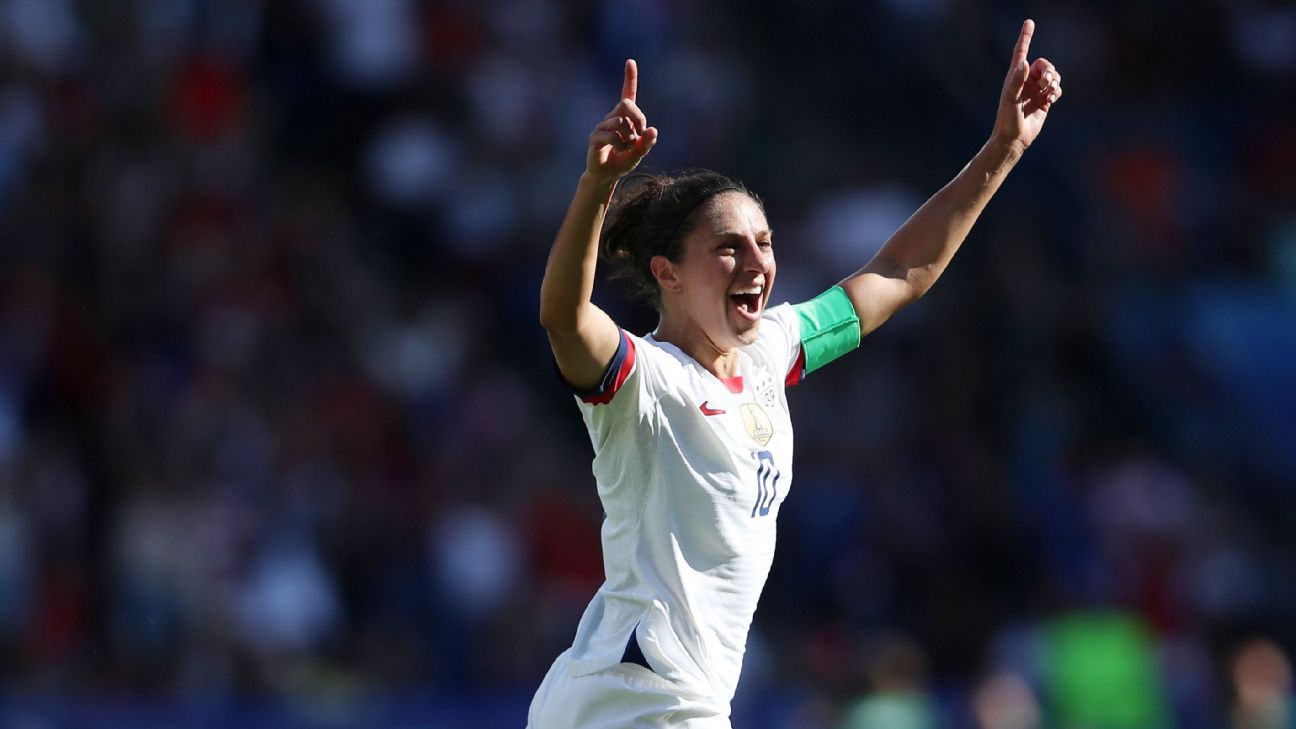 The United States beat Chile 3-0 on a record-setting night for Carli Lloyd in its second group-stage match at the Women's World Cup in Paris on Sunday to secure a spot in the round of 16.

Lloyd scored twice in the first half to move into third on the all-time scoring charts for the Americans with 10 behind Michelle Akers (12) and Abby Wambach (14), and also became the first player to score in six consecutive Women's World Cup games. Julie Ertz also found the back of the net.

Jill Ellis made seven changes to the side that beat Thailand 13-0 on Tuesday -- including the addition of Lloyd -- and the U.S. wasted no time picking up right where they left off as Lloyd buried a volley from just outside the Chilean penalty area to open the scoring in the 11th minute.

After the match, Ellis weighed in on Lloyd's starting prospects going forward: "The fact that she's now scored three goals, I don't think she could be in a better spot [to start]. I also know she's ready to do whatever she needs to for the team."

The U.S. then doubled its lead soon after Lloyd's opener with a deft, glancing header by Ertz from a corner kick that beat Chile keeper Christiane Endler, before Lloyd added a second goal of her own from another corner to send her team to the dressing room with a 3-0 half-time lead.

Ellis handed Jessica McDonald her World Cup debut at the start of the second half, as Ertz made way for the 31-year-old member of the NWSL's North Carolina Courage.

The U.S. spent the first 20 minutes of the second half applying massive pressure to the Chilean defense, with Endler, who plays professionally for Paris-Saint Germain, producing a string of world-class saves to keep the Americans out.

"Endler was fantastic, spectacular," Ellis said after the match. "She is one of best shot stoppers we've ever seen. That goalkeeper will keep that team in the mix and it's a wonderful statement about the level of goalkeeping."

VAR handed the U.S. a chance to add to the scoreline with a penalty, but Lloyd failed to get her spot kick on frame as Endler and the Chilean defense held on to keep the Americans scoreless in the second half.

"It's a mix of feelings, but I'm satisfied to have played like this, especially here, at this stadium that's my home," Endler told reporters.

"The football world powers have years of advantage compared to us in the development and support of women's football.

"This must be the beginning of something bigger and more important so more girls can dedicate themselves to the game professionally."

The win returns the U.S. to the top of Group F, level on points but ahead on goal differential of Sweden, which it plays on Thursday needing just a draw to win the group.

Both Sweden, which beat Thailand 5-1 on Sunday, and the U.S. are already assured of a spot in the knockout round.

More in this category: « Ramsey has played last Arsenal match - Emery Why did Sarri swap Chelsea for Juventus? »
back to top