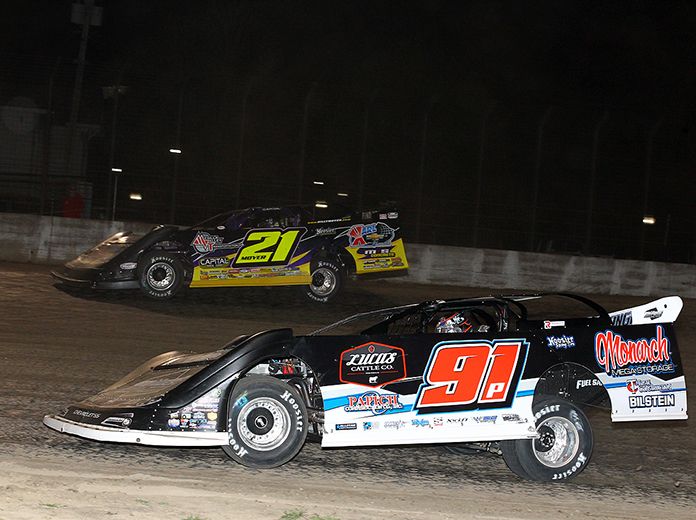 The win was anything but easy for Moyer as he fought door to door for well over half of the 40 lapper with pole sitter Jason Papich. Papich took his Longhorn chassis to the point at start, circling the low line of the speedway, while Moyer cruised around the top side.

Moyer snuck by for the lead on the fifth circuit, stealing the lead by the narrowest of margins at the line.

The duo waged war lap after lap before the first caution of the race waved on lap 17 as third running Bobby Pierce slowed down the back stretch with a flat right-rear tire. Moyer led the field back to the green followed by Papich and Brian Shirley and the battle stayed hot for the top spot until the second and final caution waved with 18 laps remaining when Jordan Yaggy spun at the top of turn two.

With the race going green for the remainder of the event, Moyer slowly began to distance himself from Papich, who began to feel the pressure for second from Shirley in the closing laps. At the line it was Moyer collecting the win by nearly a straightaway over Papich, who was able to hold off the efforts of Shirley.

Ashton Winger moved up to fourth from his tenth starting position, with Terry Phillips finishing fifth.

“We ran side-by-side for a long time, it was pretty cool,” Moyer said. “His car would go around the bottom side and I was a little better on top. It was a lot of fun, the track was in great shape and last night was too. It’s a lot of fun when they are slick and smooth and you can run side by side. You can’t ask for anything more than that.

“I think the bottom was going away a little bit more after that last restart and it slowed him down a little bit and the top basically stayed the same,” Moyer continued. “It was fun, but you had to just watch what you were doing in turn one and at both ends because you were just right on the edge of going off the end.”

More in this category: « Davenport Leads Them All In West Virginia F-1 Confirms Addition Of Miami Grand Prix »
back to top