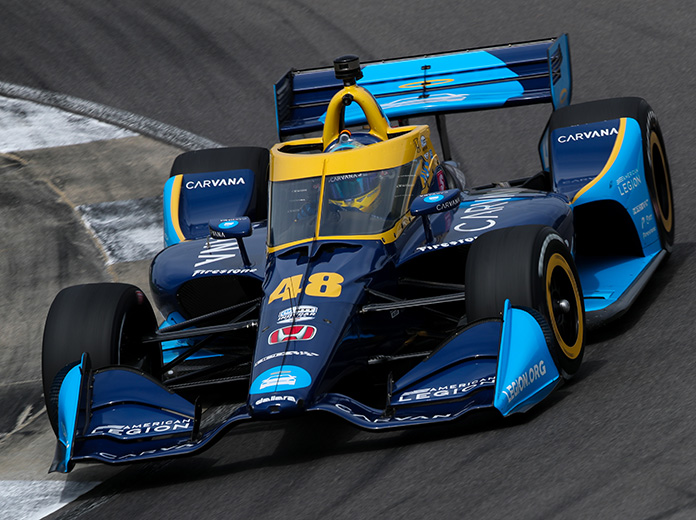 LEEDS, Ala. – When Jimmie Johnson decided to retire from full-time NASCAR Cup Series racing and begin a new career as a 45-year-old NTT IndyCar Series rookie, his decision was met with varying degrees of shock and skepticism.

The seven-time NASCAR Cup Series champion also placed himself under the microscope of scrutiny, where every failure will be magnified. One of the most successful drivers in NASCAR history is attempting a career in a completely different form of racing.

Think of it as when Michael Jordan left the Chicago Bulls in 1993 and began a career with the Chicago White Sox in their minor league farm system. Jordan was still a tremendous athlete, but didn’t possess the baseball skills needed to succeed in a sport outside of his greatness.

In Johnson’s case, however, he isn’t concerned with the skepticism or the unrealistic expectations.

He really doesn’t care because he is living a dream that began as a youngster in El Cajon, Calif. who used to attend the Long Beach Grand Prix to cheer on the stars of the CART IndyCar World Series.

Johnson entered this past weekend’s Honda Indy Grand Prix of Alabama with simple goals. He didn’t want to start last in the field, and he wanted to finish the race.

He achieved both goals by qualifying 21st in the 24-car field and finished the race 19th, three laps down.

To the armchair skeptics that love to make snap judgements, both good and bad, Johnson’s race in the No. 48 Carvana Honda for Chip Ganassi Racing went pretty much according to plan, considering his lack of experience in this style of racing.

“I exceeded expectations,” Johnson said on pit lane after the race. “It was an amazing experience, and I can’t wait to get going next week.”

Next week offers a completely new challenge to the NASCAR legend. It will be his first street race in the Firestone Grand Prix of St. Petersburg, a veritable free-for-all where contact can be just around a blind corner.

Johnson experienced that on the first lap of Sunday’s race as the field took the green flag and made it around the course until Team Penske driver Josef Newgarden triggered a multi-car crash entering turn five. Ryan Hunter-Reay, Felix Rosenqvist and Max Chilton were caught up in the crash. Johnson used some of his experience from his races down the road at Talladega Superspeedway to drive through IndyCar’s big one with only minimal contact to his Indy car.

“There was a lot going on,” Johnson said. “There was a lot to experience for that first time in traffic. That crazy crash coming into turn five on the first lap. Even packing up to be in the right spot for the initial start was pretty tricky the way everybody is spread out. Starts, I need to work on. Restarts, I need to work on. I missed the crash for the most part, which is good. I made a mistake in traffic and spun. After that, I was down a lap and out of sequence and needed to let the leaders by.

“But I learned a lot. I actually got lost in my adjustments on track, but Eric (Cowdin, his engineer), got me back on track towards the end and was able to get my lap time back up and get going.”

A 19th-place finish, three laps down, would send most IndyCar drivers home despondent. But Johnson realizes it could be next season before he is in position to contend for a victory.

“I can’t state enough just how little experience I have in these cars, how different they are than what I’ve grown up driving,” Johnson said. “It’s just going to take me this year. It’s going to take weeks, months, this season to really find that last bit of speed and be in the mix with these guys.

“Ultimately, I need to make every lap that I can. If I go out there and try too hard, make a mistake and tear the car up, miss practice time, crash out of the race early, I’m costing myself valuable time.

“I need to enjoy this moment and make sure I run as many laps as possible is the first goal.”

By joining Chip Ganassi Racing, Johnson has created a buzz of anticipation that has transcended the average IndyCar realm, bringing new eyeballs and attention to the series.

But there is also a case of perception versus reality in Johnson’s move.

The perception is that Johnson’s big-name reputation will equal into IndyCar success. The reality, however, is Johnson has a steep learning curve to an entirely new form of racing.

Johnson was asked to rate his ability as an IndyCar driver between one and 10, with 10 being the highest.

“I guess maybe a three,” Johnson said. “For the testing I’ve done, I should say the situations I’ve been in, I feel competent. There are so many situations I haven’t been in yet. There’s some discussion about rain tomorrow morning. I have yet to be on a rain tire in an Indy car. I have no idea what to expect when that happens. There’s just a long list of firsts.

“I’m trying to set realistic expectations for the fans watching. I know many of my hardcore fans expect me to hop in and be right at the front of the pack. I’d love that to be the case, but I have a long road to get there.”

Johnson’s excitement about driving an Indy car is genuine and sincere.

“It’s an awesome series,” Johnson said. “I’m happy to be a part of it. I’m happy to bring some eyeballs to it.

“At the end of the day this is for me. This is what I want to do. I want to be an IndyCar driver. I want to be out there with these guys duking it out.

“For once in my career, I’m putting more of a selfish hat on. This is about my experience, me really testing myself and trying something new. The stuff around it I’m very proud of and happy for.

“But this is all about going fast in a really fast race car.”

More in this category: « Jak Crawford: America’s Next F-1 Driver? PHOTOS: Honda Indy Grand Prix Of Alabama »
back to top