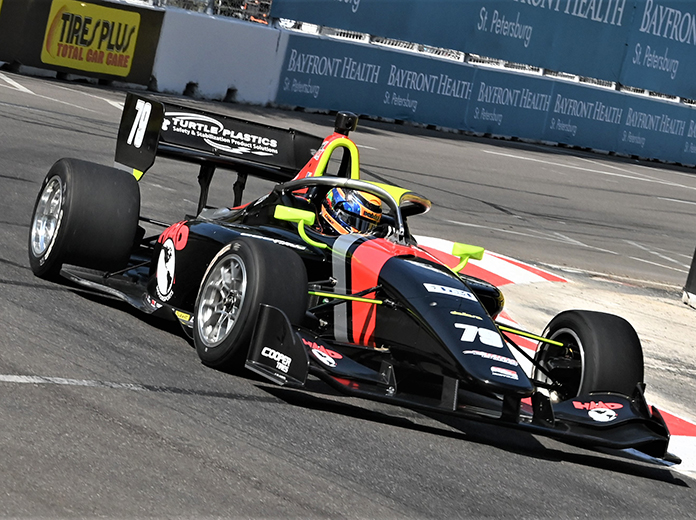 The second win of the young season for Malukas was enough to move the rising star from HMD Motorsports into a slender three-point championship lead ahead of Global Racing Group with HMD Motorsports stablemate Linus Lundqvist, who finished third. Andretti Autosport’s Kirkwood now lies only another five markers adrift in third.

At stake is a scholarship valued at almost $1.3 million to guarantee entry into a minimum of three NTT IndyCar Series races, including the Indianapolis 500, in 2022.

Just as was the case for last week’s opening event of the season at the Barber Motorsports Park road course in rural Alabama, Malukas started from the inside of the front row of the grid after snagging the Cooper Tires Pole Award with a new lap record in qualifying on Friday.

With Kirkwood starting alongside on the front row, Malukas must have been mindful of the contact from Kirkwood in the opening race of the season which had ended Malukas’ day. But as they accelerated toward the heavy braking area for turn one on the opening lap, the Chicagoan made sure to protect the inside line. Kirkwood tried his hardest to make a pass on the outside of the right-handed corner but Malukas, just 19 years of age, forcefully defended his position. The pair even made light wheel-to-wheel contact on the exit before Kirkwood was obliged to drop back into line. The racing was hard but fair.

Malukas immediately put his head down and pulled out a gap of over two seconds, only for that advantage to be erased by a full-course caution after rookie Christian Bogle deposited his Carlin Dallara-AER IL-15 into the barriers at turn 13.

The battle for the lead was resumed at the restart, until Malukas once more began to assert his authority. A series of fastest laps, including a new lap record, eclipsing the old standard set in 2018 by Colton Herta, enabled Malukas to extend his lead to as much as 3.1 seconds after 22 laps.

But after winning successive Road to Indy scholarships in the Cooper Tires USF2000 Championship (2018) and the Indy Pro 2000 Championship Presented by Cooper Tires (2019), Kirkwood wasn’t prepared to settle for second. The deficit to Malukas came down incrementally at first as the pair continued to trade fastest laps, then more substantially after Malukas, pushing right to the limit, grazed the outside retaining wall at the exit of turn 14 with four laps remaining.

Kirkwood continued to push hard, finally establishing a new lap record at 1:14.9562 (99.760 mph), but Malukas wasn’t to be denied, soaking up all the pressure and taking the checkered flag .6829 seconds clear of his rival.

“Those last laps were so intense, but that’s what makes good races,” said Malukas. “I could see Kirkwood behind me and early on, it was a three-second gap so I could cruise a bit. Suddenly, he was within push-to-pass range and all I could see was the Andretti logo again, so I gassed it the best I could. I was everywhere: scraping walls left and right, adjusting the brake bias to the rear. At one point, I was switching the bias under braking because I was locking up the fronts so bad. I was using everything I could, it was so intense. You don’t feel anything while you’re in the thick of it but as soon as I saw the checkers, there was so much relief. We worked so hard and to get the win felt so good. We’re leading the championship but it’s so close and it’s going to be that way all season, the drivers this season are just insane.”

Lundqvist efforts were overshadowed by the two leaders but, on his first visit to St. Petersburg, the Swede made up three positions on the opening lap before executing a bold pass on Italian-Canadian Devlin DeFrancesco (Andretti Steinbrenner Autosport) to move into third, where he remained. Lundqvist also took home the Tilton Hard Charger Award.