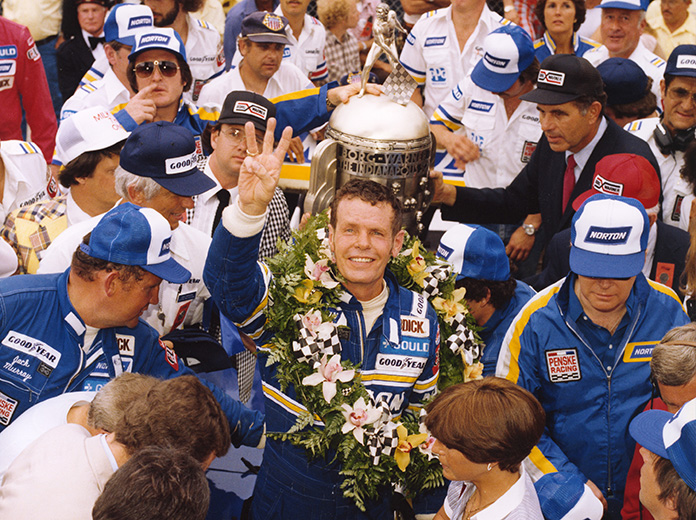 As revered by the public off the track as he was successful on it, iconic American race car driver Bobby Unser died on Monday morning in New Mexico. He was 87 years old.

Unser is best known for winning the Indianapolis 500 three times (1968, 1975 and 1981) and for his work as analyst for ABC following his driving career. His story telling is as legendary as his driving.

He earned legions of fans who admired his hard-charging driving style.

“I may not have won the race, but I was always leading when the car broke,” Unser told SPEED SPORT in 2019. “The fans knew that Bobby Unser was always the fastest driver in the race.”

Racing was in the Unser family. His brother, Jerry, died from injuries suffered at Indianapolis Motor Speedway in 1959, while his younger brother, Al, is one of three men to win the Indy 500 four times.

Unser’s nephew Al Unser Jr. is also a two-time Indianapolis 500 winner and his son, Robby, has competed in The Greatest Spectacle in Racing.

Long before the Unsers became famous at the Indianapolis 500, they had established themselves as stars of the Pikes Peak Hill Climb.

Through the years, the Unser family was dominant at Pikes Peak with Bobby Unser winning it 13 times in three classes, including eight wins during a 10-year period from 1956-’66. The driver that beat him in 1964 and ’65 was his brother, Al.

“It was my first big thing,” Unser explained to SPEED SPORT in 2014. “As a young kid, it’s what I saw where my racing future might be. I didn’t know I was going to be there until later on. It was a national championship race and it was important to recognize that. It wasn’t a local barnyard special. All of the people in general from the Indianapolis 500 also went to Pikes Peak. It had a lot of credibility and the credibility is what excited the Unsers because the big names were there.

Unser was born in Colorado City, Colo., but his family moved to Albuquerque when he was a year old.

Success on the mountain eventually pushed the family toward Indianapolis.

Unser began his Indianapolis career in 1963 and scored the first of the family’s nine Indy 500 victories in 1968.

Despite his outspoken nature, Unser had a difficult time explaining the family’s success at Indianapolis.

“If the Good Lord hadn’t said these things were going to happen there was no logical way you could predict these things would happen,” he said. “The end result is nine wins — nine wins. That’s unheard of.

“One of the biggest things that ever happened was one family winning the Indianapolis 500 nine times. That’s what made the Unser family what we were.”

In 1949, Unser started racing at Roswell (New Mexico) Speedway. In 1950, he raced at Speedway Park in Albuquerque and won his first championship in Southwestern Modified Stock Cars. After serving in the U.S. Air Force from 1953-55, Unser and his brothers Jerry and Al decided to pursue racing careers in USAC competition.

Unser also made four NASCAR Cup Series starts with a best finish of fourth at Riverside (Calif.) Int’l Raceway in 1973 and ran a lone Formula One race in 1968.

He won the 1975 International Race of Champions title and claimed the Fast Masters championship in a unique series for retired drivers in 1993.

After joining the ABC broadcast team, Unser called the finish in 1987 with play-by-play announcer Jim Lampley as his younger brother, Al, earned his record-tying fourth “500” victory and again in 1992 when he and Paul Page called the race when his nephew, Al Unser Jr., won Indy for the first time.

Unser also was part of the ABC Sports broadcast team that won an Emmy Award for “Outstanding Live Sports Special” for its coverage of the 1989 Indianapolis 500.

After his TV career ended, Unser continued to visit IMS every Month of May. In 1998 and 1999, he served as driver coach and assisted with race strategy on the radio for his son Robby Unser during his two starts at Indy. Robby finished fifth and eighth, respectively, in those two starts with his father’s help.

Fans flocked to “Uncle Bobby” to get a picture or autograph, to share their memories or to hear one of Unser’s countless colorful stories about his career and fellow racers.

Unser is survived by his wife, Lisa; sons Bobby Jr. and Robby; and daughters Cindy and Jeri.

More in this category: « Dotson Doubles Down During Hanford IMCA Run Two More For Dotson During California IMCA Speedweek »
back to top