British and Irish Lions 2021: Where South Africa Test series may be won and lost 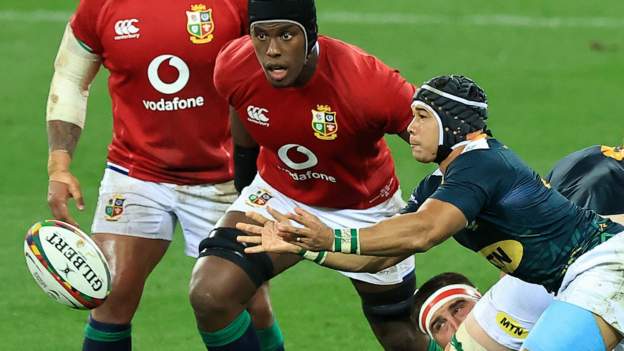 By the end of Saturday, the British and Irish Lions' fate in South Africa will be much clearer. For now, it is all guesswork.

Warren Gatland's side suffered their only defeat of the tour against a Test-level South Africa A team, but even that is not much of an indicator as only four of the starting XV from that loss will start against the Springboks proper on Saturday.

With South Africa having played so little since winning the 2019 World Cup, few can predict how the series is going to go, but here are a few areas that could prove vital in the next three weeks.

The last time the Lions lost the first Test and went on to win a series was against Australia in 1989 so it is no wonder defence coach Steve Tandy describes the opening game as "massive".

"You get that feeling within the group now how big it is," Tandy continued.

"We know how important the start of the series is to hopefully get out in front."

Former Lion Ugo Monye knows from experience that how the team plays from the very earliest exchanges in the first Test is crucial.

The winger was among the starters when the Lions went 13-0 down in the first 20 minutes of the opening Test on the 2009 tour - the tourists were beaten 26-21 despite two late tries before going on to lose the series 2-1.

"You have to get it right in that first 20 minutes of the first match," he said on BBC Radio 5 Live's Rugby Union Weekly.

"We didn't in 2009 and we conceded a couple tries and it was really poor. I'm hoping they hit the ground running."

Prop Tadhg Furlong said he was preparing for "big-boy rugby" against the Springboks, the side with which the word physicality is perhaps most associated.

South Africa stifled England up front to win the World Cup final and Francois Louw - who was a replacement flanker in that game - says the Lions can expect more of the same.

"I think South Africa will just stick to what they're good at and just slowly chip away."

Lions forwards coach Robin McBryde is in confident mood, but expects the Springboks to "go harder" than they did in the South Africa A game.

"We've got to take confidence from that and build on that performance."

With the brutality of the Springbok pack taken as a given, Monye believes it is essential that the Lions enforce their own authority on the game.

The Lions have a backline to challenge the hosts with the cool head of fly-half Dan Biggar, a versatile centre partnership in Elliot Daly and Robbie Henshaw and the pace of scrum-half Ali Price.

But Monye says "South Africa spook teams into thinking you have to be different".

"What you have to do is get your detail right on who you are going to be," he adds.

"We have to take them on and not get massively distracted by what South Africa are going to do, and really nail the detail of what we are going to bring."

Gatland acknowledges that his Test side is likely to change because of injuries, but is confident given the calibre of players he has waiting in the wings.

"I would like to think we have a little more depth than the South African squad has at the moment," he said.

England scrum-half Danny Care says those on the bench "are as important as the starters", adding: "I'm a big advocate of the bench and they are going to be the ones on the pitch at the end of the game that might just win you it."