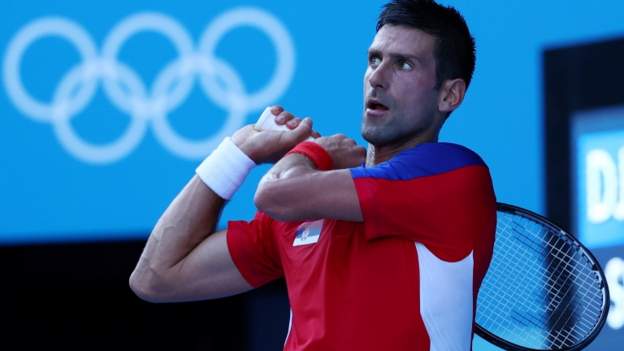 Novak Djokovic launched his bid for Olympic gold with a quick first-round win in sweltering conditions that world number two Daniil Medvedev said were "some of the worst" he had experienced.

He is aiming to become the first man to complete a 'Golden Slam' - Olympic gold and all four Grand Slams in a year.

Djokovic has won the Australian Open, French Open and Wimbledon in 2021.

The 34-year-old is joined in the second round by Russian Medvedev, who beat Kazakhstan's Alexander Bublik 6-4 7-6 (10-8) in a match played in the middle of the day when the temperature at Ariake Tennis Park reached 32C.

Medvedev, 25, said it was a "joke" that players were allowed only one minute at changeovers rather than the usual 90 seconds and called for matches to be pushed back to later in the day.

"I think, like they do in Mexico, the matches should maybe start at like 6pm because the heat actually gets much lighter," he said.

Medvedev's compatriot Anastasia Pavlyuchenkova, 30, had to take a medical timeout during her match when she started to feel dizzy in the blazing sun.

"I feel better but I have a massive headache now so that's why I was trying to try to cool down after the match and rest, relax little bit," said Pavlyuchenkova, who cooled herself with ice bags before completing a 6-0 6-1 win over Italian Sara Errani.

Also in the women's event, Poland's Iga Swiatek made a winning start to her Games debut with a 6-2 6-2 win over German Mona Barthel.

By competing in Tokyo, the 2020 French Open champion has followed in the footsteps of her father Tomasz, who represented Poland in rowing at the 1988 Seoul Olympics.