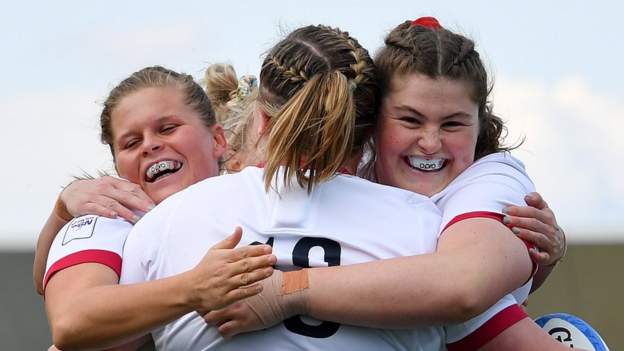 Simon Middleton chuckled when it was suggested his rotated England team's 12-try win over Italy had given him dilemmas rather than any answers.

"We have got plenty to think about I can tell you that," the coach said.

"We were outstanding today. I thought our physical effort was so intense that it probably made them look pretty ordinary and they are not.

"We have massive selection choices. We have invested a lot in the depth of the squad so we can have these problems."

Middleton stated before the Women's Six Nations that he would share game time around his squad in the first three rounds as England prepare for a likely decisive final-weekend showdown with main rivals France and a Rugby World Cup campaign starting in October.

Scrum-half Natasha Hunt, 33, was one of those to make her case to Middleton as she marked her first international since November 2020 with a lively performance and player-of-the-match award.

"She brought a great tempo, sharp as a tack, you saw that down the short side when she set up Sarah McKenna for the first try," said Middleton of Hunt.

"She was always buzzing, always alive, a great passing game, a threat on the ball, but then again Lucy Packer came on and fizzed around and her passing is great.

"Leanne Infante had a big game last week [in the 57-5 win over Scotland] so we have three scrum-halves in really good form. "

Hunt, part of the team that won the Rugby World Cup in 2014, said she was not looking much beyond enjoying her rugby.

"I loved it. It's been amazing to be back with the girls and throwing the ball around with my mates. I love playing with quick ball," she told BBC Two.

"My big aim was to raise the tempo and keep driving that and if I've managed to do it, I've done my job. That back line was ridiculous today, so playing a part in it, was brilliant."

England's last defeat before their current 20-match winning run was a 28-13 defeat by world champions New Zealand in September 2019.

The Black Ferns also hold the record for the longest run of consecutive Test wins at 24.

Italy were never going to end England's streak, and the stats show just how dominant they were:

But perhaps of more interest to Middleton were the individual player statistics.

Only wing Lydia Thompson, who scored a hat-trick, managed more metres in hand than flanker Alex Matthews' 141m, as the Worcester Warriors back row staked her claim in another highly competitive area.

Centre Emily Scarratt provided a reminder of her enduring class with her first Test try since her return from a broken leg, and her 50th since making her England debut as a teenager in 2008.

With the likes of world player of the year Zoe Aldcroft on their way back to full fitness, Middleton is only going to have more of those "good problems" to solve over the next few weeks and months.

Next weekend it will be Wales trying to stop his all-conquering world number one team marching to a 21st win in a row.