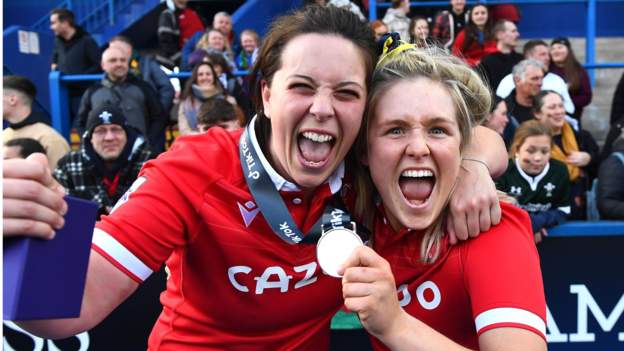 As far as starts to professional eras go, Wales have made a decent one.

They have bagged bonus-point wins from their first two Six Nations games, with victories over Ireland and Scotland.

Public support has never been better, as reflected in a record attendance for a women's game at Cardiff Arms Park on Saturday.

What a change in fortunes it has been in just 12 months - although the acid test of Wales' progress comes next week when they travel to play title-holders England.

The Red Roses have been fully professional for three years, while Wales' 12 full-time and 12 retainer contracts have only been in place since January.

England have scored more than 50 points in each of their last few meetings with Wales, but Ioan Cunningham's team can travel to Gloucester with an air of optimism given their resurgence from the wooden spoon side of last year.

Head coach Cunningham and his backroom staff have to take some credit. They have provided stability after various coaches came and went following Rowland Phillips' departure in 2019.

Cunningham, a well-respected former Scarlets and Wales-Under 20 coach, took charge in the autumn and has brought an ethos of rewarding hard work in training and performance on the pitch.

Sioned Harries is among those to have benefited, with the number eight making a sensational return to the set-up having spent over two years in the international wilderness.

Her turnover and try proved a game-changing moment in the victory over Scotland, as Wales' bench sparked a remarkable second-half comeback, just as they had done in Dublin.

"Sioned Harries made a big impact, Bethan Lewis, Ffion Lewis, Donna Rose again. We challenge them to come on and bring energy and I thought they did that," Cunningham said.

Former captain Carys Phillips is also back and back with the bang. The hooker has scored six tries in her past three outings, mostly from Wales' set-piece, which is proving a powerful weapon.

At the other end of the experience scale is rising teenage star Sisilia Tuipulotu, who won her first cap in Dublin, adding to Wales' ever-growing talent pool.

Such is Wales' strength in depth right now, full-time professionals like Rose and Lewis start as replacements.

Wales captain Siwan Lillicrap said she "couldn't be prouder of the girls" for grinding out another win having been behind, but admits they must start better if they are to challenge England.

Discipline will also need addressing, Wales having coughed up 13 penalties and a yellow card against the Scots.

"My message to the girls at the end was 'we can't keep doing this', we can't wait until the last 10 minutes even though it is entertaining rugby and everyone is on the edge of their seat," Lillicrap said.

"We believe as a squad that we're a good outfit, we can play well and we can execute, but it would be nice to go ahead and allow a team to chase us."

Lillicrap says Wales will take confidence heading to Kingsholm Stadium, even if there is plenty for them to work on.

"We've got to be honest with our performance and ask why we didn't start better, why we didn't play some more territory and keep possession," she said.

"We've got to raise our game again against England. The Red Roses are outstanding, they're a top team in the world for a reason.

"We play with and against those girls week-in, week-out, so we know how good they are. We'll show them respect and hopefully we'll give them a great game of rugby next weekend."

As well as delivering improved results on the pitch, Lillicrap and her Wales team-mates hope to continue to inspire future generations.

Prior to the Scotland game, 1,300 female hub players from all over Wales played at the Principality Stadium before joining the crowd at the Arms Park.

"We're a proud nation, a small nation, a rugby nation, and we just want to keep on inspiring people to enjoy the game in whatever capacity, whether you're a volunteer, a coach, a spectator or a player that wants to be in our privileged position to wear that badge.

"That's our duty and we do that through how we play. I think the girls have done that over the last two weeks."